A golden age of television

Borrowing a line from his Frankfurt School colleague Leo Löwenthal, Theodor Adorno once derided the mindlessness of the idiot box as ‘psychoanalysis in reverse’, a backwards medium enforcing conformity, distraction and the programmed life. Yet with today’s crop of complex, multilayered shows, driven by cable channels in the US such as AMC and HBO, television has become one of the rare places wherea properly psychoanalytic or critical mode of thinking is able to develop, and on a popular scale. As if to announce this ‘reversal of the reversal’, the first of these great series, The Sopranos (HBO, 1999–2007), began in an audaciously Freudian manner: a gangster-on-the-couch dreaming of a bird stealing his penis. I would argue, however, that the key reference for understanding the new television is Honoré de Balzac rather than Sigmund Freud: like La Comédie Humaine (The Human Comedy, 1845), the current generation of TV dramas combines page-turning soap-opera intrigue with painstaking sociological analysis. The comparison with the 19th-century realist novel is also apt given the pronounced literary character of these shows: the best and most socially engaged writing is no longer on the big screen but the small one, where the ‘author’ is not the director but the writer/producer.

Many of these landmark series are reaching their dramatic apexes; among them, three stand apart as especially worthy of one’s viewing hours. Matthew Weiner’s Mad Men, which premiered on AMC in 2007, transports us to a time just distant enough to throw our own into sharp relief. Like a dramatized version of Adam Curtis’s 2002 documentary The Century of the Self, its tale of the glory days of the Madison Avenue advertising industry in the early 1960s charts the birth of the modern capitalist subject. One of the famous slogans of May ’68 was Jouissez sans entraves (Enjoy Without Obstacles). The genius of Mad Men, set just prior to the sexual, creative and feminist revolutions, is to show precisely a world of ‘enjoyment with obstacles’, a prelapsarian civilization luxuriating in taboos, buried secrets, traditional gender roles and socially sanctioned intoxication – but also aware of its impending demise and suffused with longing for a new and more open world: the fall out of sin. Last year, in its fourth season, as the fledgling firm of SCDP (Sterling Cooper Draper Pryce) struggled to establish itself, lead character Don Draper had a boozy personal breakdown and even briefly contemplated coming clean, yet finally recovered his refined signature hypocrisy, publishing a fake confessional anti-cigarette ad and then taking up with yet another pliant secretary. Weiner recently said that he’d like to end the show in the present day, with Draper in his 80s. Against the prospect of an It’s a Wonderful Life-style conclusion, I’d prefer a more abrupt disappearance for the man who, in the words of his spurned lover, Dr Faye Miller, ‘only likes the beginnings of things’.

Even that trivial comedy about nothing, Curb Your Enthusiasm, which premiered on HBO in 2000 and last year finished its eighth season, has a fundamental sociological dimension. Star and creator Larry David is not so much the prickly, narcissistic asshole he is often made out to be, as a kind of self-appointed enforcer in an asshole world where civility has broken down and the rules of common life need to be constantly renegotiated, from parking etiquette and appropriate phone-calling hours to the rate of hors d’oeuvres consumption at your friends’ anniversary party. David is disturbingly democratic, treating all people – kids and parents, waiters and guests, celebrities and nobodies, Palestinians and Jews – exactly alike, not in the mode of condescending respect but of radical annoyance. This strange ‘aesthetic equality’ with its principle of universal aggravation is the most fascinating aspect of the show and, if anything, David’s role as ‘social assassin’ has grown more exaggerated as the world around him turns meaner. If the Michael J. Fox Parkinson’s jokes were a highlight of the last season, the lowest moment was no doubt the meeting with Ricky Gervais, the two comedians having zero on-screen rapport (unlike, for example, David and Richard Lewis). But even this botched episode produced a classic line: to a shocked stranger whom Larry asked at a dinner party how often he has sex per week, the great anthropologist of quotidian life explains: ‘I’m just trying to elevate small talk to medium talk.’ 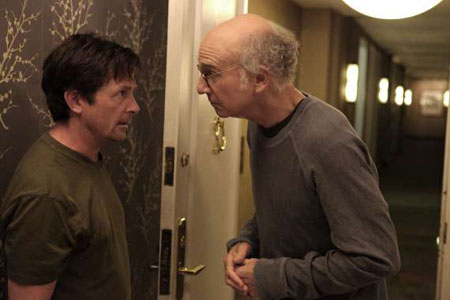 A suburban high-school chemistry teacher gets cancer, then turns to cooking crystal meth in order to provide for his family when he’s gone: the premise of AMC’s Breaking Bad (2008–ongoing), as twisted and original as it is, is almost less important than the startling image that opened the series in 2008. We’re in the desert: a haggard, bespectacled man, wearing only underpants and a green dress shirt, stands in the middle of the road, gun raised, the wail of sirens growing louder, nearby an RV lies crashed in a ditch. This painterly tableau provokes a question that the show is constantly raising: how in hell did we get to this point? Over four seasons, Breaking Bad has slowly traced its protagonist’s Dante-esque descent; last season, the main character, Walter White, became so unsympathetic and morally warped that one actually wished he’d be offed by the cartel, and the focus shift to one of the interesting secondary characters, like White’s junior partner-in-crime Jesse Pinkman.

Almost a decade before The Sopranos, David Lynch’s Twin Peaks (1990–91) – still a bizarre UFO in the mass-media heavens – anticipated today’s more complex and radical brand of TV. There is something of Lynch’s aesthetic sensibility and fascination with the dark underside of suburbia in Vince Gilligan’s wicked vision of middle-class Albuquerque, New Mexico, in Breaking Bad. The series’ visual mannerism, as opposed to, say, the stylishness of Mad Men,became even more pronounced in the past season, with viewers deciphering images as much as following plot and dialogue: the coffin-framed shot of White in his home’s basement cackling madly, the stream of bloodin the glistening green water of a Mexican cartel leader’s swimming pool, Gustavo Fring calmly fixing his tie, a dandyish finalgesture before falling dead, his face half blown off by an IED strapped to a wheelchair. Last year, with the demise of Fring – murky Chilean expat, fried chicken king and dedicated friend to chemists – television lost one of its all-time greatest villains.