Nicosia, the capital of Cyprus, has been chosen to host Manifesta 6 in September, 2006. The curatorial team comprises Mai Abu ElDahab, an independent curator based in Cairo; Florian Waldvogel, a curator and writer living in Frankfurt and Essen; and Anton Vidokle, a Moscow-born artist who lives in New York, and who is a founding director of e-flux. Inspired by Black Mountain College, which opened in 1933 in North Carolina, and whose teachers and students included some of the most important artists, writers and thinkers of the time, the Manifesta team intends to start an experimental art school in Nicosia 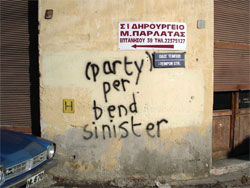 Jennifer Higgie: Why was such a politically sensitive and culturally divided location as Nicosia chosen for this edition of Manifesta?

Anton Vidokle: Nicosia had already been selected by the International Foundation Manifesta by the time the curatorial team entered the picture. The proposal to use the funds, structure and network of Manifesta 6 to start an art school was articulated specifically in response to this location. There is no art academy in Cyprus, so the Manifesta 6 School has the potential to be a productive meeting ground, bringing people from both communities (Greek- and Turkish-Cypriot) together, and opening the city up to international exchanges.

Mai Abu ElDahab: The problematics of why Manifesta as the ‘European biennial’ of contemporary art should choose Cyprus as an appropriate venue for this event also plays a role in our response, particularly since this location was selected for strategic reasons that still need to be clarified.

JH: None of the curators of Manifesta 6 are Cypriots. What is your relationship to the situation in Nicosia?

AV: None of the curators of Manifesta 4 were from Germany, there were no Spanish curators in Manifesta 5, and no Slovenian curators in Manifesta 3. Manifesta is not a national exhibition, it’s an international project. Would this be a question if Manifesta took place in London? It is often assumed that the issues involving centres beyond North America and Western Europe are specific to those regions and incomprehensible to anyone who is not a specialist or is not related to the place by blood, which does not quite make sense.

MAD: Choosing non-local curators is Manifesta’s model for its biennials. Naturally, this has both merits and disadvantages. Choosing a local curator can certainly facilitate a deep reflection on the location but can also constrain a project that could benefit from a different expertise combined with advantages of a fresh eye. A successful balance obviously depends on the curatorial team’s skill and commitment of course.

Dan Fox: On the Manifesta website the hope is expressed to ‘route Manifesta for a period of two years into a serious investigation around the geographical and conceptual framework of Europe at large, and particularly with regard to its relationship to the Middle East and Northern Africa.’ What do you think contemporary art has to offer to these kinds of big, complex issues and how do you see the results of such an investigation reaching beyond the world of cultural producers and those interested in contemporary art?

AV: I’d rather we didn’t start from the assumption that cultural production in general, and contemporary art in particular, is unable to offer anything of substance to ‘big, complex’ social issues – that when art takes on these questions, it can’t mean anything to anyone beyond the world of specialists or practitioners. This underestimates both the artist’s ability to understand the world and the audience’s ability to understand art. Not to mention putting all art and all audiences on the same footing. Dictionaries define culture as ‘the integrated pattern of human knowledge, belief, and behaviour that depends upon human capacity for learning and transmitting knowledge to succeeding generations’. This would make ‘the world of cultural producers’ a very far-reaching one. If Manifesta were limited to such a world, I personally would be completely satisfied.

Florian Waldvogel: Cyprus has been a member of the EU since May 2004. It is particularly suited to a forward-looking project centred on new approaches and models in knowledge transfer and education. At the Manifesta 6 School in the world’s last divided capital city a great variety of discursive formats and activities will address the issue of the transition from interdisciplinary to transdisciplinary education in the field of art, producing a critical stocktaking of this process. By critical I mean in Theodor Adorno’s sense of the word – criticism as a theoretical endeavour that runs counter to ‘blind’ practice.

MAD: Perhaps this is an opportunity for the European art community to learn from the Middle East where there is no distinction between ‘big complex ideas’ and cultural producers. This luxury and safety zone does not exist. In the Middle East, and possibly many other non-Western locations, it is cultural producers who take on these big complex issues head-on because of the way they affect everyday existence making politicization a de facto reality. Delving into these types of issues is a way to break down the reciprocal relationship between Europe and the Middle East, and look at the way in which they are completely intertwined.

DF: Black Mountain College is an historical precedent for the kind of experimental art school you wish to establish in Nicosia. What does it represent to you and how do you see this kind of older educational model functioning differently from today’s art schools?

AV: We mentioned Black Mountain in our proposal because it is a good example of how a vital and influential art institution can be created far from centres of advanced cultural production. Its educational model was very much ahead of its time: an interdisciplinary approach to art education, the idea that extracurricular activities are as important as what happens in class, and the presence of an international faculty. We still have much to learn from the restructuring of educational priorities and definitions that Black Mountain represented.

FW: Since the relationship between master and pupil derives from a form of teaching dating back to the 18th century, it is necessary to set about renewing the content of teaching in European art academies by means of project-based and practical transdisciplinary education. Classical academic disciplines and classes must be discontinued. If European art academies wish to prepare students for the 21st century and to push forward new forms of teaching, it will require a complete reform of the education system.

JH: What criteria are you employing to choose artists to participate in Manifesta? Are you looking for artists whose work responds explicitly to the local situation? How many ‘students’ do you wish to include in the project?

AV: We hope to include between 80 to 100 participants. ‘Student’ is probably not the right word. We are looking not only for artists but also writers, filmmakers, designers, architects, scientists, economists, actors, journalists, composers – it’s really very open. It is our hope that the school is truly trans-disciplinary. Rather than only looking for people whose work responds explicitly to the local situation on Cyprus, I think we are looking for participants who are willing to seriously commit to working at the Manifesta 6 School for a period of time – such a commitment by its very nature would necessitate involvement with the local context.

FW: Schools and universities are increasingly losing their socio-political autonomy, as they become the locus of vocational qualification. Under these circumstances institutions such as art schools are acquiring a new field of activity – testing out new models for education. As these institutions have traditionally been able to react more quickly and flexibly to social change, they may be in a position to work out tomorrow’s models of education. But before we begin to discuss existing and potential models for the training of artists, the very profile of the artistic profession must be reformulated. What options are open to art students in the art world anyway? What do existing models of education have to offer – beyond the development of the self? As most professors agree with the premise that art is un-teachable, blinding their students with notions of artistic freedom and thrusting them into bohemian fantasies, they stand in the way of critical approaches to political, theoretical and social discourses. In any case, since the advent of project-based art in the early 1990s, the model of the artist has moved in the direction of a cultural worker.

MAD: A ‘serious investigation’ necessitates moving beyond standard references and discourses. For the School to add anything substantial to the art, or culture field at large, it needs to be open to endorsing new, opposing or alternative paradigms and bringing them to the forefront.
It needs to change the standards of the art world in both evaluating such a project and engaging with it. This is the only way for the concept to move away from being a gimmick to a rigorous and confrontational intellectual exercise. Accordingly, those invited to participate are those who want to challenge, inspire and transform the existing structures and formulas of art and art education, and the socio-political indifference they perpetuate.

JH: Is there anything else you would like to add?

AV: I am surprised that the question of why Manifesta is not doing a show but is starting a school was not asked – perhaps that’s good: an unspoken acknowledgment that this is simply necessary and does not need to be questioned? Another unasked question is whether this school is a temporary or permanent one. Again I think it’s good that this issue was not raised; perhaps this underlines the fact that permanence is not so important.

FW: I am fundamentally interested in the question of education as an exhibition format, and in discussions, seminars and workshops as a form of practice and its presentation.

The application to Manifesta School can be downloaded at www.manifesta6.org.cy