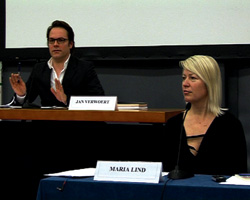 At this year’s ARCO, critic and curator Tirdad Zolghadr and artist and director of e-flux Anton Vidokle put themselves on trial for ‘collusion with the bourgeoisie and other serious accusations’. Aping the style of a television courtroom drama, the day-long event took place under the aegis of the Berlin seminar programme, unitednationsplaza. The defence was led by Charles Esche of the Van Abbemuseum, Eindhoven, and the team for the prosecution included Vasif Kortun, from the Platform Garanti Contemporary Art Center, Istanbul, and Chus Martinez of the Frankfurter Kunstverein. frieze contributing editor Jan Verwoert presided as judge, while artists and curators Setareh Shahbazi, Maria Lind, Fia Bäckström, Dirk Herzog and Anselm Franke were called as witnesses. The event was filmed under the direction of curator Hila Peleg.

Verwoert commenced the trial – which coincided, somewhat uneasily, with the opening of the trial of the 2004 Madrid bombings – by stating that the defendants had accused themselves and that the precise nature of their crimes was yet to be determined. It was difficult from the outset to ascertain the event’s objectives, which mixed the language of criticality with the logic of hype. Was the trial really only about the two self-appointed ‘prisoners’ in the dock or did it aim to investigate bigger issues such as, in Verwoert’s words, ‘the threat against the free spaces for producing art’, or what being ‘bourgeois’ means in our neo-liberal day and age?

The trial developed as a kind of parlour game of juridical protocol, animated by the participants’ ability to keep the ball in play and invest their professional personas in the semi-fictional scenario. The speakers adopted an eloquent, rhetorical turn of phrase – it was all ‘my clients’, ‘your honour’ and ‘how do the defendants plead?’ – that proved highly entertaining, particularly to those familiar with the protagonists’ usual form of address.

Taking the stand at the close of the proceedings, Vidokle and Zolghadr proposed the format of ‘The Madrid Trial’ as a viable alternative to the more regular art-fair discussion panel, which they denounced as self-aggrandising. According to Vidokle, the idea was to ‘re-energize an oversaturated situation where everybody is burnt out’. ‘Judge’ Verwoert finally acquitted the defendants on most of the charges lodged against them by the prosecution – including patriarchal posturing, wasting the court’s time, capitalizing on the art fair erotics of commodity fetishism and mobilizing their professional peers to participate in a chimera of a confrontation – stating that ‘so limited an amount of meaning was produced’ during the day’s discussions that the trial could not be deemed ideological.

By appropriating rhetorical codes of jurisprudence, the trial sought to reflect on the ways that people and information circulate in the art world. However, the curatorial predilection for inventing new models through which art can be viewed and discussed can only partially qualify such a situation: ultimately, if it doesn’t really develop any new insights which couldn’t have been developed better in, for example, an old-fashioned seminar format, it carries the risk of being an ideological position itself.