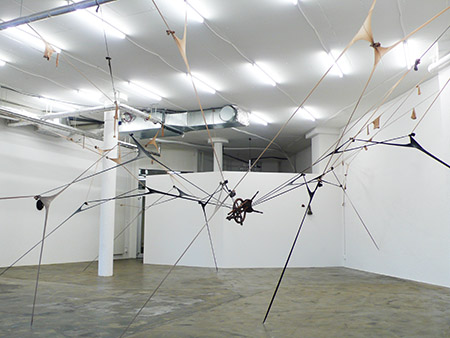 ‘Her body lessen’d all, but most her face. / Her slender fingers, hanging on each side / With many joynts, the use of legs supply’d: /A spider’s bag the rest, from which she gives / A thread, and still by constant weaving lives’ (Ovid, Metamorphoses, Book VI). Thus ends the tale of arrogant Arachne, who challenged Athena to a weaving contest and who the angered goddess punished by turning her into a spider. Throughout art history, the spider (arachne in Greek) has been an established pictorial motif. For the Surrealists, for instance, the spider’s web acquired significance as a metaphor for an associative gaze capable of linking things, interweaving the conscious and the unconscious, imagination and rationality.

Martin Soto Climent takes this legacy and its focus on dialogue with the marvellous and the uncanny as the foundation for his work. Titled ‘I Miss My Thread’, the Mexican artist’s show at Karma International, which moved to new premises near Zurich’s Löwenbräu complex this summer, drew strongly on the myth of Arachne. The principal piece was the room-filling sculptural installation The Spider (all works 2012), a delicate web of black and nude-coloured stockings fixed to the floor and ceiling and suspending a spinning wheel in a kind of equilibrium at the centre of the room. Within this installation, Soto Climent arranged several smaller objects symbolizing the ‘prey’ of his ‘spider’. These works were often marked by an erotic subtext: a pair of men’s shoes woven together by their shoelaces hung in the corner of the space (Missed Thread), while a folded bra that resembled an egg lay on the floor ([like an] egg).

Many of Soto Climent’s works feature everyday items or articles of clothing he finds on the street or in second-hand shops. He then arranges these objects, unaltered or with minimal modifications, in new constellations as sculptures or installations that resemble the descendents of Surrealist works such as Meret Oppenheim’s 1936 My Nurse (a pair of white high heels tied together on a silver tray) or Man Ray’s 1921 Cadeau (an iron with a line of thumbtacks attached to its flat underside). This heritage can be found throughout Soto Climent’s works: for example, in A Nap in the Open House (2009), two red high-heeled shoes are placed almost casually on a white sheepskin, yet are positioned to suggest a vulva. The Surrealists explored objects as fragments of memory – as a means of evoking personal recollections not sanctioned by society, and a way of developing one’s own powers of association. Here, Soto Climent’s recontextualizations – most of which consist of two different objects – require just a few small gestures from the artist, a transfer of energy that does without extraneous materials like adhesives. The classical model of ‘inventio’ – the art-historical topos of artistic ‘invention’ – undergoes a shift towards the ‘discovery’ of new connections that call on the viewer to ‘see associatively’. A work like Soto Climent’s One’s Mind – a felt hat hung on the wall and a spoon precisely placed in the middle of its central crease – falls into the tradition of the readymade, but its use of multiple components also creates a dialogue with the viewer’s mental associations.

Soto Climent’s often-poetic titles also play a role in this dialogue. A high-heeled shoe with a woman’s blond wig ‘planted’ inside it bears the title From the End to the Beginning, while an old purse, folded to suggest a tongue lewdly lolling out of its opening, is called Desire (Frozen Dream). Soto Climent recontextualizes these objects to break them from their original functions, aiming to generate surprise. In that sense, his show was very much in the spirit of André Breton, who advocated the ‘objectification of the activity of dreaming, its passage into reality’.

Raphael Gygax is an art historian and critic. He lives in Zurich, where he has worked at the Migros Museum of Contemporary Art since 2003.