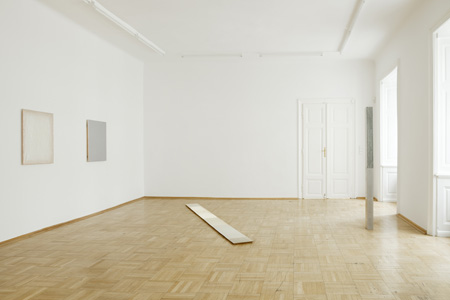 Once upon a time, museums were the apotheoses of Minimalist architecture and the perfect spatial accomplices for Minimalist art – before artist Richard Serra and architect Frank Gehry bucked the trend. Polish artist Michał Budny bucks in his own direction by producing small Minimalist objects: paintings (which are, in fact, assemblages of wood, cardboard, wax paper and cellophane that look like small canvases) and understated sculptures that actually beg to be considered as pieces of interior design. Budny’s recent solo show, ‘Mirror’, contained ten wall-mounted assemblages, two delicate cardboard columns painted cream and pale slate, and a floor work similar in appearance to a Carl Andre tile piece (though Budny’s object is too dainty to be walked upon). His colour palette – which could be described as ‘very Armani Casa’ – ramps up the sense in which his objects lean towards boutique-hotel accoutrements. Meanwhile, his simulated ‘paintings’ made from squares of cardboard or wood draped in wax paper seem to be a détournement of the tonal shifts of Mark Rothko’s and Barnett Newman’s colour-field works or the optic reverie of Frank Stella’s protractors and Peter Halley’s grids.

In Budny’s previous solo exhibition at Galerie Nächst St. Stephan in 2008, from which this exhibition followed on, the artist presented the first of his ‘Mirror’ works – Untitled (Eyes in a Mirror) (2008) – a cardboard wall-object painted with two black circles reminiscent of empty eye-sockets. The show also included several domestically scaled plinth-based and shelf-based objects that looked like high-end design (of the slightly surreal Ron Arad variety) as much as they looked like sculpture. Their petiteness and their proximity to design took some solving, and I remember being thankful for the cosy salon environment of the gallery in which to do my thinking. I related the objects’ vibrations between fragility and geometric rectitude, indeterminacy and verisimilitude, to Constructivism’s fascination with spirituality – a higher purpose that subverts its hermetic appearance.

Read in tandem, the muted and restrained works of Budny’s 2008 and 2011 exhibitions seem to represent an escape from the theatricality of contemporary Polish art. Lately, as art museums are being designed with 20-metre-high walls and soaring atrium spaces (Warsaw, Budny’s hometown, is currently awaiting its own impressively-scaled Museum of Modern Art), Vitruvian-size works are being disempowered, and intimacy rendered obsolete.

Budny invokes intimacy in his materials: three of the paintings here (Mirrors 14,15 and 16, all 2010) were made with lipstick on board under wax paper. The exact shade is Giorgio Armani’s Rouge d’Armani Lasting Satin #500; the salmon-pink colouring lifted the mainly verdigree and off-white hues of the other works. Lipstick is also a marker of desire, in both the commodified Marxist and sexualized Freudian senses of the word, set in what is proposed to be a perfect environment for an intellectual tryst (think of the propensity of boutique hotels to include art works as a selling point). Budny’s trick is his use of impoverished materials – cardboard, wax paper, aluminium foil, varnish – to achieve his seeming perfection. The technique signals a subversion of the visual order he is apparently appealing to – a playful knowingness imbuing his fragile objects. (Beware the collector who matches one of these objects to his house’s interior, as the joke would be on him.)

With this show, Budny also made a foray into performance and video for the first time, staging a one-man dance performance choreographed by Gilles Guillain, recorded in situ (also titled Mirror, 2011). Clad in a black unitard, Guillain performs a quadrangular set of small gestures reflective of social greetings and communications (high fives, nods, shrugs) as a spatial-poetical allegory of the other works. Alone in the gallery, the dancer is a cipher for the viewer’s physical and mental interaction with Budny’s works – the flights of fancy art inspires when nobody else is looking.