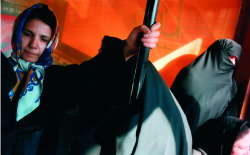 'News from Tehran', said the curatorial statement, was based on 'artistic and cultural practices in Iran' but was not seeking to fit 'individual works into preconceptions of cultural locality'. Although the exhibition did include individual works that varied widely in thematic and formal concerns, the statement still begged the question of just what 'Iran' and 'Tehran' might imply, once geographical or cultural preconceptions have been left aside, particularly in a place such as Europe, with its rich history of quirky notions of Iran and beyond. Given that it is now standard on the European art circuit to criticize the folly of regional categorization and then cheerfully to deploy it oneself, it might be Western cultural practices that are at stake here, rather than Iranian ones.

To state the obvious, issues become more complex and nuanced when embedded in a trans-local context rather than a regional register, where their potential as internationally comparable work is usually reduced to exoticized terms such as 'the oppressed woman', or 'the religious ceremony'. The projects assembled by Rotterdam-based artist Nasrin Tabatabai in collaboration with Babak Afrassiabi, however, offered appreciably subtler approaches. These ranged from the publication Pages, devoted to questions of urban space in Tehran, through Bahman Kiarostami's Tabaki (2001), a documentary piece on Shiite panegyrists discussing religious ceremonies as a matter not merely of spiritual frenzy but also of material gain, professionalism, performance and personal gratification, to Maani Petgar's Film Lovers (2002), which, via questions of cinematic staging, authorial positioning and the interplay of various media, addressed sexual discrimination during the making of the blockbuster film Do Zan (1999).

It's worth mentioning that most of the artists presented here are not exactly household names even to those within the Tehran art circuit. This is not to suggest that Tabatabai came back from Tehran with a truckload of unknown gems, like precious archaeological trophies. Rather, instead of aiming for a collection of astounding individual discoveries, her show gave the impression of a glimpse into a local scene of young filmmakers, photographers and video and performance artists. In viewing the show a few common denominators sprung to mind: the socio-politically informed documentary edge, sophisticated plays on fact as fiction, but also the annoying stylizations of dreams and symbols (mirrors, flightless birds and the jittery 'memory' function on the DV camera).

Whether it was performance group Arta's documentation of their work or Saeideh Akbari's sober black and white photographs of an upper-middle-class family (Family, 2002-3), this testimonial touch became particularly relevant when it conveyed a sense of the lifestyles and perspectives of the artists themselves. For if one does choose to curate a show based on common local links, whether out of political strategy or commercial pressure, it makes sense to demystify and contextualize the chosen artists, to show them in relation to their immediate working environment and social class. With its 'work in progress' feel, 'News from Tehran' succeeded in being engaging while remaining unassuming and anti-spectacular. This was in marked contrast to the tiring sensationalism with which the concept of 'the region' is currently marketed, be it - to name only Witte de With projects - Catherine David's aspirations to 'map' the Arab world ('Contemporary Arab Representations', 2002-3) or Jordan Crandall's 'Under Fire', 'exploring' contemporary armed conflicts and exhibited in the adjacent space to 'News from Tehran'.

One poignant scene in Pirooz Kalantari's video piece Wandering (2002), portraying Tehran on the eve of reformist President Khatami's re-election, shows a policeman motioning to the camera and saying, 'Aks-e ma ham begir' ('take my picture too'). As he does so, he casually links a myriad of issues: the readiness for (self-) representation that is fairly obvious in Tehran; the limits of translation and translatability, both of a language - the scene is too brief and the subtitles too unfocused for the point to come across - and of a historical atmosphere that has now been replaced by something decidedly different; and the politics of the speaker, the sweet and obliging policeman. Is he the threatening instrument of the state volunteering to domesticate himself, or perhaps the proverbial 'good cop', whose amenability makes him seem disproportionately charming? Here matters of representation were discreetly entangled with the aesthetics of sovereignty and privilege.