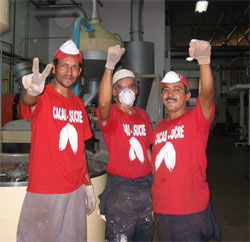 Walter Benjamin used the term ‘now-time’ (Jetztzeit) to describe a revolutionary break in the continuity of history, a moment when ‘truth is laden with time to the point of explosion’. Organized by Chris Gilbert at Berkeley Art Museum, ‘Now-Time Venezuela’ was a cycle of six exhibitions intended to mark one such era of social and political change: namely the Caracazo uprising in 1989, Hugo Chávez’ failed coup d’état in 1992 and election in 1998, and the ‘Bolivarian Processes’ in the years since.

‘Now-Time Venezuela’ offered a case study in the contradictions inherent in exhibiting Agit-prop in a space for contemporary art. The cycle took an explicitly partisan stance, operating ‘in solidarity with’ the Bolivarian Processes (the term given to revolutionary reform in Latin America, named after Simón Bolívar, the 19th-century Venezuelan independence leader) and ‘aligned with epic struggles for political change’ – connecting recent events in Venezuela to a larger history of revolutions worldwide. ‘An almost uncanny isomorphism emerges from the haze of bourgeois history,’ Gilbert wrote, ‘with salient characteristics such as squatting and the reappropriation of common property, the centrality of women in the struggles and, most to the point, occupation of the means of production through factory and farm takeovers.’

The series began with documentary films by Dario Azzellini and Oliver Ressler (Part One: Worker-Controlled Factories, 2006) and contiued with clips from Catia TVe, a community-run television station in Caracas (Part Two: Revolutionary Television in Catia, 2006). These films were staged together as installations rather than screened one after another. Most faced in a single direction, creating a layered cinematic field broken by benches and dangling headphones. While viewers sat in front of one film, the others flickered around the edges: women brandishing rifles in Palestine and El Salvador, textile workers in San Cristóbal, cocoa production in Cumaná.

Revolutionary Television was a cacophonous bleed of images and sound: 12 monitors playing a Spanish-language collection of commercials, feminist Agit-prop, oddball cartoons and more. This made for a confusing scene, although a subtitled documentary created by Catia TVe framed the garrulous collection effectively enough. Part One’s films were organized more deliberately. Moving from one screen to the next, they had the mounting tension of classical rhetoric, building from discussions of particular situations and processes to a management meeting at ALCASA, an aluminium factory in Venezuela's Bolivar State, led by the charismatic Carlos Lanz.

Although certain phrases, such as ‘socialism for the 21st century’, recurred often in the interviews with factory workers, Lanz was the ideological heart of the films. A final screen, reversed so as to be seen only as one entered or exited, showed him and Maravit López operating as an ‘Endogenous Development Unit’, an organ devoted to the ideological persuasion of those workers who did not immediately agree to the goals of collectivization. The common language spoken in the films, then, was the result of careful pedagogy. The project of transforming the processes of production, said Lanz, is inseparable from transforming the relations of production, including how people talk about them.

I have reservations about this kind of ideological coaching. The films didn’t let me know the stakes of the dispute Lanz’ unit hoped to resolve, nor did they admit some of the complexity of the larger Venezuelan situation. (Lionized in the films, Chávez is by no means a universally beloved leader.) Insofar as it means the pursuit of shared goals and unity of purpose, solidarity hardly militates towards contentious discussion. BAM had different reservations about his use of the word: indeed, as the second instalment was being prepared, the museum administration asked Gilbert to rephrase his partisanship, from ‘in solidarity with the Bolivarian process’ to ‘concerning’ the same. Gilbert refused and resigned his position as curator as soon as the second exhibition was installed, effectively ending the ‘Now-Time’ cycle. One sees why he did so: how is a cultural producer to navigate the treacherous difference between solidarity and concern?

Still, the fact that this dispute effectively ended the series was disappointing. At their best the ‘Now-Time’ exhibitions emblemized a vital re-imagining of ‘creativity’. No longer relegated to the sphere of art or, in Gilbert’s words, the ‘micropolitics’ of identity, in now-time creativity might again become a form of political agency, transforming social relations, modes of production, political organization and so on. Women with grungy mini-cameras on the streets of western Caracas might just re-invest the terms sometimes used to describe art – avant-garde, revolutionary, disruptive – with something of their former social and political weight. Here was a pointed retort to those who would argue that such stuff doesn’t belong in an art museum.