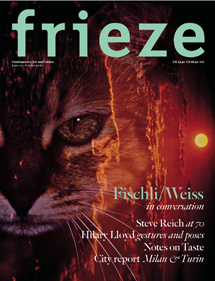 The sci-fi movie-like title that Pash Buzari chose for his recent hometown solo exhibition, ‘Plan of the Planet’, could only be interpreted as tongue-in-cheek. Especially when the poster for the show was a remix of the graphic insignia of Throbbing Gristle, known for their ambivalent evocation of the Holocaust and fascism. Notions of the future and Utopian thought in cinema, architecture, design and art have been the principal focus of Buzari’s artistic practice. In recent years this broad topic has been visited in many discussions and contemporary art exhibitions, including ‘Utopia Station’ at the 50th Venice Biennale, in which Buzari participated. Current affairs have understandably added urgency to a re-examination of outdated forms of optimism and shelved and unrealized plans and proposals – no matter how bizarre, obscure, puffed up or flawed they may seem. As an artistic subject they also inflect the central quandaries about art’s purpose and responsibilities. In this exhibition Buzari re-presented an unlikely collection of displaced models or artefacts connected loosely (and this is not necessarily a bad thing) by ideas about social groups and communal visions, as well as creating a pun on physical construction and theoretic deconstruction.

The exhibition, an installation of sorts, consisted of seven sculptures and some photographs, including two ceiling shots of lit fluorescent tubes hanging in inky blackness (‘Lightshots’ series, nos. 2 and 3, 2004). Buzari kept the gallery’s lighting turned off, and this simple transformation of the space was the phenomenological glue that held this fragmentary show together. Natural light mingled with light sculptures and shadowy corners, producing a subtly shaded environment constantly in flux. The sculptures all had a DIY, model-like look, with the exception of Geosphere Fragment (2006), which occupied an atrium room. This work, like the top you crack off a boiled egg at breakfast, was a fragmented geodesic dome hanging from three orange fork-lift trucks, which could have been designed by Anthony Caro. The endearing thing about the sculpture is that, unlike a completed dome with its self-supporting strength, minimum weight and maximized volume, an incomplete or partially dismantled piece of dome is delicate, unstable and easily warped. In the same room was an enlarged snapshot, Azteca (2005), of Mexico City’s 1960s’ football stadium, which apparently has been haphazardly altered over the years. Perhaps the image was intended as a counter-weight, a kind of reality check about accommodating the masses.

Occupying without filling up the centre of the main space was Buzari’s citation of Paul Thek’s lost ‘Artist Co-op’ collaborative installation: black hens, ephemera and a body-casting table filled the original Chicken Coop (1969). Buzari’s CO OP (2006) was a similarly shaped wooden frame apparently scaled up and left empty – as if something had been forgotten or erased. Buzari would probably agree with Stuart Morgan’s elegiac assessment (in frieze issue 24) of Thek’s work and generation: ‘It is the meaning of that life at that time which is lost: a life of travel, communes and festivals, of drugs and promiscuity, but above all, perhaps, of expectations of the future. Now we feel we know better; the high hopes of the 1960s were unfounded. Worse still, with the passage of time, what Thek called “the wonderful world that almost was” became a joke, a dream, a hieroglyph without a key.’ Buzari properly quoted Thek as a role model in order to suggest that this exhibition was also a ‘work in progress’, but his sculpture lacked Thek’s intimacy and humour. Thek once noted: ‘I want to present an atmosphere – an ambiance – which is so peaceful and so beautiful that you’re shattered when you leave. My feeling is that the only way you can make things better is by showing how good things can be.’

Light Table No.9 (2004), easily the best work in the exhibition, consisted of a trestle table with light bulbs mounted underneath, which were switched on and off in sequence by circuitry on the top clicking at an andante tempo. Anyone standing near the work could observe consecutive frozen shadows of their silhouette jotting back and forth on the surrounding walls, intended to recall the photographic sequences of Eadweard Muybridge and the magic of early cinematic experiments. Multiple perspectives and their fleetingness seemed to be the point. What was apparent was that for Buzari art is principally a place for speculative thinking – a conviction that made the show worthy. What perhaps stopped it from being really good was that many of the works were in danger of standing in the shadow of their historical basis.