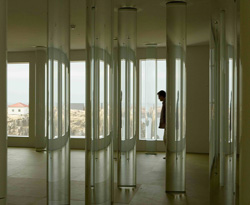 Perched on top of a low cliff in the coastal village of Stykkishólmur in Iceland – a country with a population of only 300,000 people, and the place where, in Jules Verne’s famous novel travellers began their journey to the centre of the earth – is a former library. The scenery around it is breathtaking. The cold sea changes colour in a heartbeat, while the village’s small tin houses huddle around the bay like cold pensioners. The sky is huge and capricious, washed clean every few minutes with achingly clear light. Distant islands seem to appear and disappear at whim. It’s the kind of place you assume is on good terms with fog. For more than 20 years, American artist Roni Horn has been visiting Iceland, a country she said she chose ‘the way another artist might choose marble as the substance of one’s work.’ Concerned with language, water and weather, and the complicated machinations of identity, the artist – whose survey exhibition, ‘My Oz’, opened at Reykjavik Art Museum in May – wanted to offer something back to the island that had given her so much. Visiting Stykkishólmur, she had heard of plans to move the library and proposed ideas for its possible use to the Mayor. Soon after, the London-based arts organisation Artangel committed to making Horn's idea a reality and Vatnasafn/Library of Water (all works 2007) was born. Horn’s idea in many ways simply extends the notion of what a library is: a place of reflection, cataloguing, community activity and learning; book readings, meetings about environmental issues, yoga, music classes and women’s chess sessions. As Horn put it, she wants it to be ‘a lighthouse in which the viewer becomes the light.’ The library’s windows were enlarged to look over the ocean, and rubber floors were installed and embedded with a field of 144 adjectives, in Icelandic and English, that describe the various moods of weather (torrid, fine, kyrrt, slarkfaert, sunny). One circular room remains empty; the other contains Water, Selected – 24 three-metre glass tubes of water collected from glaciers around Iceland. The tubes are minimal, graceful and glow softly; water, such an ubiquitous yet precious substance, is displayed at once like a combination of still life and rare object (which in many places of the world, it is, and in many more, is fast becoming). The basement has been converted into a writer’s residence. Young novelist, Gudrún Eva Minervudóttir, the first recipient of the grant, said to me that living below the Library of Water, overlooking the sea, was ‘a kind of heaven’. The third part of the project involves an ongoing archive of weather reports gathered from people living in and around Stykkishólmur, where, coincidentally, the regular monitoring of meteorological conditions in Iceland was first undertaken by Årni Thorlacius in 1845. Horn has taken literally Sigmund Freud’s theory that to ‘talk about the weather is to talk about oneself’. The first collection of reports has been published as a book or, as the artist describes it, a ‘collective self-portrait’, entitled The Weather Reports You. Horn has long been interested in the weather; ‘everyone has a story about it. This may be one of the only things each of us holds in common … it is finally, one weather that we share.’ The book makes for fascinating reading: fishermen, teachers, farmers and ambulance drivers tell stories about their experiences of the weather, and it’s a page-turner. A child states that ‘the best weather is weather I can play basketball in’ while a woman in her 80s says that the ‘weather’s like a part of my body’. For the library's opening, Horn invited a friend to play music in the space. In a red dress, Ólöf Arnalds sang, in a voice as pure and clear as the air outside, folksongs and songs she had written, some a cappella, others accompanied by guitar or a small instrument shaped from an Armadillo’s shell. As she played, the light swiftly changed; the sea sucked and swelled, and the water from the glaciers glowed like sentinels. International visitors mingled with locals. When Arnalds finished her astonishing performance, we walked down the path through the arctic wind to eat ice-cream and drink wine. It was almost midnight but refused to get dark. No-one wanted to go to bed – the start of just another night in Stykkishólmur.