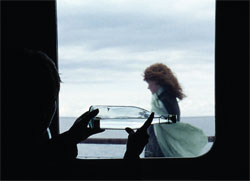 Film is particularly adept at documenting a journey; in its most ubiquitous form – the road movie – it can attest to a literal distance as well as a metaphorical one, usually that of a character’s coming of age or moral transformation. Yet the point of these passages is their destination: travel implies a conclusion, or at least the hope that we are ‘getting somewhere’. The title of Runa Islam’s video installation How Far to Fårö (2004), part of her show ‘Out of the Picture’, similarly suggests an interest in a terminus: the island of Fårö, which lies off the coast of Gotland, Sweden. Fårö has been home to Ingmar Bergman since the early 1960s, but in Islam’s work the famous filmmaker’s retreat is in fact never reached. The two works on show in this exhibition present Islam’s efforts to forestall a finale, exploring where meaning lies when conclusions are off-limits.

How Far to Fårö betrays no sentiment for its subject. The rough ferry crossing to the island is impassively recorded: sublime swaths of sunlight on the water and skies full of foreboding punish solitary passengers who persist in attempting to remain standing up on the wind-whipped deck. Despite the drama of the landscape, Islam refuses to fictionalize her subject, but the formal elegance of the work makes it difficult to describe as documentary. The blank depths of the ocean are framed by the rigid armature of the boat, its flatness emphasized by a relentless horizon line and the railing of the ship. Form is further abstracted through the similarity of the ocean’s surface to both the pleasingly plain green deck of the ship and the format of the screen itself; this rectilinear pattern is punctuated only by lone figures. A shock of bright auburn hair and a rebelliously flapping scarf shatter the subtle modulations of the scheme. Islam’s previous citations of canonical European directors have primarily been a means for an investigation of technical concerns: her 1998 film Tuin is a remake of a scene from Rainer Werner Fassbinder’s Martha (1973), featuring a 360-degree turn of the camera. Conversely How Far to Fårö leaves the filmmaking of Bergman behind; whereas the landscape in his trilogy of films shot in Fårö is always symbolic, reflecting states of mind or the course of a narrative, Islam resolutely refuses to elaborate beyond the visual.

The work comprises three vast screens set at a slight angle to each other, images flick from one panel to another; scenes are cut short and repeated, magnified or re-examined across each panel. The ocean is made to sound staccato, underlining these disjunctions so that the accumulation of shots becomes more like a series of details, the significance of which is indeterminate. This record of exposure to the elements is interspersed with footage of a stop-over in a pine forest, where more clement conditions offer a welcome respite for travellers and viewers. According to Islam, How Far to Fårö is her attempt to create an ‘open film where the railing of the ship becomes as important as anything else’. Yet by having care and attention lavished on them, these apparently inconsequential details loom large in the minds of Islam’s audience, who are left to puzzle over their implications. As the scraps of evidence are gradually pieced together, it gradually becomes clear that the people on the ship are the same as a film crew in the wood. When the camera pulls back, a glimpse of the artist herself gives a flash of Brechtian self-reflexivity. This is short-lived, however, and doubt creeps back in: who are these filmmakers – are they making this film or another one? Anticipation for the missing clue imparts a strange sense of temporality that is divorced from the actual 17-minute duration of the work itself. Despite Islam’s attested interest in ‘the non-action, the non-drama’, time resides in the curious sensation of suspense.

If the characters of How Far to Fårö remain entirely anonymous, the eight rickshaw pullers of The First Day of Spring (2005) reveal more. The men recline on their vehicles while sedate tracking shots allow an exhaustive examination of their appearance. Presented in the small reading-room of Camden Arts Centre and filmed on 16mm, Dhaka’s evening sunlight filters through the trees, imparting an intimacy to the portrait. Islam’s stated desire to ‘reclaim the idea of alienation’ is enacted as the similarity between each man’s dusty shirted attire begins to fall away and differentiation of character is determinable in the hollow of an eye or even stains on a cap. A defiantly jutting lip nearly goes as far as denoting a radical in their midst, but then an odd blink of the eye and rise of the chest render any identifiable characteristics as once again elusive. The experience is infuriating but unexpectedly edifying; as the capacity to determine character falters, the basis of our judgement is accordingly revealed.

While a wasted journey is what we all seek to avoid, Islam demonstrates that an ending is not all. Stating that ‘editing is like a sentence’, she carves up strata of signification to mine a gap where meaning can proliferate. In doing so she exposes how a priori judgement can forestall the possibility of arriving somewhere new.