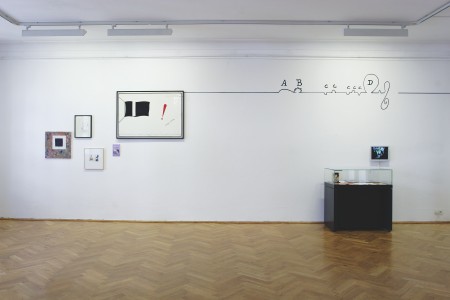 The curatorial concept devised by Helmut Draxler (incidentally, no relation of mine) for the exhibition ‘Shandyismus: Authorship as Genre’ is modelled on the ironic approach adopted in Laurence Sterne’s novel The Life and Opinions of Tristram Shandy, Gentleman (1759–67). Sterne’s satirical take on the genre of ‘autobiography’ encompasses endless digressions and concludes at a point in time pre-dating the opening chapter. The central character is the work’s fictional author, Tristram Shandy, whose theatrical bluster includes extensive reflections on his own authorial position. The book contains blank pages to indicate where the author has removed a chapter, a black page to symbolize the passing of the character Yorick and squiggles to illustrate a person’s movements. Yet these visual elements are less illustrative than aesthetically autonomous, causing the book to appear as a panopticon of linguistic and visual forms of expression. In retrospect, the Shandyist method of progression through digression could be called Postmodern, although, rather than being ironically relativized, authorial authority undergoes a radically subjectivist exaggeration. This is clearly the aspect that interested Draxler (a prolific writer of art criticism and theory, and former director of the Kunstverein Munich), and the exhibition is best read as a multidimensional narrative of the life of a critic and curator. On that score all of the featured works are key pieces and the ensembles into which they are arranged amount to strong interpretations.

In 1983 Martin Kippenberger painted a frivolous adaptation of Kasimir Malevich’s Black Square (1915), Untitled (H.D.V.A.D.W.), an abbreviation for Hängt die Verräter an die Wand (Hang the Traitors on the Wall). Measuring 50x50 cm, the image contains a gaudy impasto mix of pinks and purples into which is set a shrunken black square, framed, as in the original, by a white border. This rather figurative constellation of a picture placed within a picture in effect is a pun on what’s been done and said in relation to non-figurative painting since Malevich. Draxler combines this piece with Louise Lawler’s It Could be Elvis (1994), a detail of a luxury home’s wood-panelled wall that crops into the lower part of a Warhol portrait of Joseph Beuys that could loosely be confused with a picture of Elvis, and Marcel Broodthaers’ Le drapeau Noir, Tirage illimité (The Black Flag, Unlimited Edition, 1968), a pictogrammatic – and puzzling – instruction sign that includes a flag, an explanation mark and the phrase ‘tirage illimité’. In their own distinctive ways Kippenberger, Lawler and Broodthaers are masters of self-reflexive art production, and it’s maybe because of this that a cover for Hal Foster’s book The Anti-Aesthetic: Essays on Postmodern Culture (1983) is placed next to them. Finally, the odd one out in this constellation, and maybe its punch-line, is a portrait of the wunderkind Clara Schumann, Untitled (Clara Schumann III) (1999–2000) by Josef Kramhöller, whose approach could be described as more naive–depressive than self-reflexive. Draxler knew Kramhöller personally before the artist committed suicide in 2000, and interestingly cites him here as an example of radical egocentricity. The positions adopted by the members of this grouping thus appear to range from cool theoretical distance to fiery narcissist identification. In an adjacent room, another of Kramhöller’s Schumann drawings is contrasted with digitally generated human outlines and pictograms by Olia Lialina and Dragan Espenschied – With Elements of Web 2.0: Constellations (Tryptichon) (2007) – and with a classic inverted drawing by Georg Baselitz – Untitled (GBZ 3157), 29.11.1991 (1991).

The exhibition as a whole was framed by wall graphics such as pointing fingers, Shandyist squiggles and other formally related visualizations, including Sigmund Freud’s ego/id diagram. Vitrines containing album and book covers, newspaper cuttings and similar articles were in fact micro-exhibitions on the theme of authorship, assembled by artists and academics, friends of Draxler, acting as sub-curators. A video by film theorist Drehli Robnik edits together all the Alfred Hitchcock Cameos 1926–1976 (2007); a self-portrait by Franz West entitled Studies (2007) depicts the Viennese artist as two small cardboard figures standing in a glass case among sculptural loops.

It is generally accepted curatorial practice to develop themes as objectively as possible and then to let the art speak for itself. There is a taboo against setting the artists’ stories within the curator's own. Yet Draxler does precisely this: every thread leads to him. He has worked closely both with those collaborating on the show and with many of the featured artists. ‘Shandyismus’ is a comment on a curatorial ethos that denies the constitutive entanglement between mediators and their subjects. Like Sterne’s book, Draxler’s concept is not free of comedic impudence. The comedian is the model subject of modernity, asserting his heightened sense of individuality against the ordinary and meeting the ‘modern’ fate of a reversal of the important into the insignificant, sense into nonsense. Taking oneself seriously in spite of this is art.