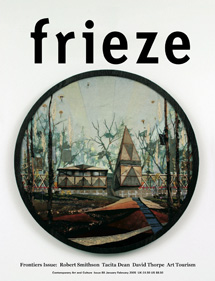 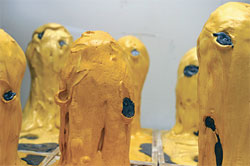 Like most things in Steingrimur Eyfjörd’s world, his recent show ‘Wuthering Heights’ originated with a story – a classic Icelandic poem about a mother who dies with her young child sitting beside her, amidst a desolate landscape (‘Wuthering Heights’ refers to Iceland here, not the novel by Emily Brönte). The image of the dying woman in the poem had inspired an early 20th-century drawing that Eyfjörd had seen, which in turn reminded him of a sculpture of a volcano by another contemporary Icelandic artist, Ásmundur Ásmundsson. This led to their collaboration on a series of drawings (‘Mamma!’, 2004) and to Eyfjörd’s production of a series of upright child/volcano-shaped maquettes made from milk cartons and plastic containers. After this came another series of 16 amorphous-shaped plaster and lead forms covered in ceramic, 16 suspended makeshift constructions of taped wooden knobs and drum sticks (some with their price tags still attached), 16 cartoon-like drawings with thought-bubbles, and 16 white, glossy panels with a silhouette outline of the aforementioned hovering wood constructions.
The misshaped plaster, lead and ceramic forms, or ‘pawns’ as the artist refers to them, are both a culmination of Eyfjörd’s concerns and the beginning of new ones – pawns in a maddening system that find structure in apparent chaos. To see connections between the child of the poem and this vast collection of work requires quite a stretch of the imagination, even with their genealogy explained. References ricochet between works with wild abandon.
The pawns sat glistening awkwardly on pedestals like half-melted pistachio and banana ice cream towers. Despite their slapdash, makeshift construction, each piece was positioned in measured relation to the other – an ensemble that included a thought-bubble drawing, a wooden construction hanging above it and a panel of a silhouette that reproduced the cast shadow of the knobby wooden form. The various elements are both clumsily elegant and utterly strange, even as they remain resolutely preoccupied with materiality and surface, process and repetition – heirs to Lynda Bengalis’ oozing lead pieces from the 1970s and Franz West’s sculptures, and yet possibly even more psychologically charged. The thought bubble drawings that accompany each sculpture record a reaction by a friend of the artist; their descriptions determined the title of the piece and often evoke the personality of the friend as much as the work.
Words bounce back, and so it is with nearly everything Eyfjörd makes – one thing leads to another; a story or conversation can inspire an aesthetic form. On two occasions he consulted a fortune-teller and wrote their predictions on a large-scale canvas entitled Filling the Holes (2003) – vague descriptions of foreign lands, curious mishaps and a series of major life changes, including an exhibition of work much like this one. The painting, with Eyfjörd’s characteristic corrections and stains on a wine-red background, revels in the way words can create a portrait.
This exhibition provides a good example of the ways in which Eyfjörd’s work since the late 1970s has drawn on other peoples’ words, from the most literary to the banal. References to overheard conversations, Icelandic sagas, French theory and women’s fashion magazines all reverberate throughout the artist’s sculptures, installations, drawings and comics. A news story about a girl brought up in a hen house, an imagined narrative about violence inflicted on someone whose torn underpants were found in a hidden closet, descriptions by lonely men of their ideal woman: all become source material, crucial starting points even when Eyfjörd’s odd, searching forms are finally un-tethered from what triggered them.