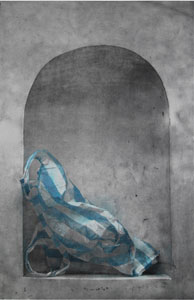 Kicking off last July in celebration of its tenth anniversary, Ingleby’s ambitious curatorial programme has inspired many fertile combinations. New exhibitions are held every eight days: Ceal Floyer and Dan Flavin, Cornelia Parker and Marcel Broodthaers, Jonathan Monk and Keith Arnatt, Richard Wright and Samuel Beckett all promise to be inspiring tag teams. Less well-known than many of these pairings, Tommy Grace and Kate Owens are exceptional, so far, in being a regular collaborative partnership. Their installation made use of the detritus of our culture in ways that connect with the modern tendency to use rubbish to communicate why we have kept what we have kept. Abbreviated representations of garbage were set within the gallery’s Neo-Classical architecture to narrate a retro-future of rubbish.

NU-autumn (all works 2007), a series of plastic carrier bag fragments affixed to the gallery’s window panes by condensation, was a poly-culture of sorts, albeit one hewn from Marks & Spencer and Sainsbury’s bags. The waste of one culture becomes the sustenance of another; a process of consumption feeding one of purposeless production. Stamped all over with ‘please re-use me’ and ‘recyclable’, the maxims of today’s bourgeois virtue, the bags are icons of aspiration, the contemporary equivalent of the late-18th-century room they inhabited in this show. The stained polythene window refracted and coloured the light entering the room, inflating its cosy domestic ambience.

A triptych of photo-etchings hand-tinted in E-number hues echoed the neo-Georgian emphasis here on harmony, balance, the artificial and the staged. Common food additives such as E123 Amaranth – a colouring banned in the USA – literally highlight the things that are non-biodegradable, preserving them as our future ruins in the process. The new hues are given names that sound like a range of emulsion or make-up: ‘Blush’, ‘Sap’. This language of natural affinities (or perhaps of mastering nature) alludes to alchemical compounds of exotic plants and insects such as cochineal. These treatments have long formed an allegorical basis of pigment production – an elaborate system of encoding and signification that is established before the colours are even applied.

The prints resemble coloured-in daguerreotypes, stiff images of spontaneous forms. The triptych ensnares a moment in the lives of three polythene bags that float around aimlessly, like spectres roaming an abandoned city. Cities are built on rubbish, the remains of millennia of human occupation. This rubbish has settled in empty alcoves, where it takes on the grandeur of monuments to the great and the dead. This is the destiny of our extravagant waste, preserved for posterity, forever lording it over its makers. Framed by their sandstone mise en scène, they are incarnate actors on stage. Rather than tower monumentally, they stumble like scavenging vagrants doped on chemical compounds of E129 Allura Red and E124 Ponceau 4R. The unbranded red and white corner-shop bag Blush tries its best to stand to attention but slumps a little, propping itself against the wall to steady its feet, while its E133 Brilliant Blue FCF and white striped buddy Blue collapses melodramatically into a heap. Once the most respectable and established member of the triptych, the E103 Chrysoine Resorcinol hued Marks & Spencer bag Sap has fallen on the hardest times. It crouches doubled over, as though it’s been kicked in the guts. This is old-fashioned laissez-faire litter, left to fend for itself where it falls rather than recycled or disposed of out of sight.

Nothing is intrinsically toxic; waste, in the right context, is a treasure. As anthropologist Mary Douglas would have it, what we call trash is simply matter out of place. Modern habits of seeing waste as what properly belongs in the bin are thrown into perspective when the very idea of rubbish starts slowly to disappear from our culture. There’s nothing in the life-size Reproduction of Hellenic Ministry of Culture Litter Bin, which forms the central sculptural element of this exhibition. Reconstructed in MDF and modelled on the design of contemporary transparent waste baskets currently found scattered around Athens’ Acropolis, the vessel’s emptiness emphasizes its sleek classical forms.

In an otherwise residually rich milieu this transparent bin is one that can’t serve its true calling; it can’t hide our debris. There’s no carpet to sweep the dust under, and thus little impetus to throw things away. Ideal for today’s climate of fear, such garbage receptacles now expose what they once contained. They do so not to keep us safe from Damoclean detonations but to remind us of rampant over-consumption and our duty now to temper our desires for the future – in this case, with some Neo-Classical moderation. The bin is in danger of disposal, of being replaced by the ‘recycling unit’. The classical armature of this see-through rubbish bin is entirely apt, for if nothing is ever again disposable to us, if obsolescence becomes obsolete, then nothing will ever again be truly ‘new’.