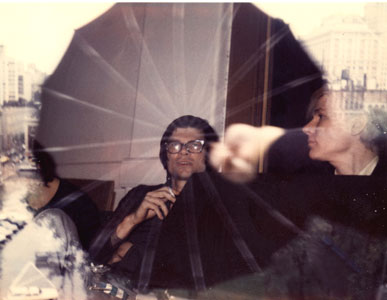 In his essay ‘A Museum of Language in the Vicinity of Art’ (1968) Robert Smithson describes Andy Warhol’s sado-masochistic response to the strictures of the artist interview: ‘Words for Warhol become something like surrogate torture devices.’ But Warhol’s pained monosyllabicism is only half the story: what he shared, precisely, with Smithson was a commitment to the form of the published dialogue as such. For sure, the richly digressive, reference-laden interviews anthologized in Smithson’s Collected Writings (1996) seem spun out at some esoteric remove from the flat, phatic style of The Philosophy of Andy Warhol (1975) or the strictly paratactic social register of The Andy Warhol Diaries (1989). A certain fazed affect links their writings, however: neither artist seems quite with it in prose. More importantly, Warhol’s favoured mode of ‘A to B and back again’ is the undialectical twin to the complex feedback and relay systems imagined by Smithson: their texts incarnate two types of dialogue, or rather two ways that conversations can fail.

This is where Saul Anton’s intriguing book begins: Andy and Bob (A and B) in fictional dialogue on the streets of New York at some undefined date. Warhol’s Dream opens like a page from Andy’s (literally) phoned-in journal: after a disturbed night, and an early-morning call to assistant Brigid Polk, he sets out through curiously empty streets towards his favourite diner, where he finds Smithson seated in a corner. They visit the Empire State Building – an ‘Ultramoderne’ tomb, according to Smithson, who is afraid to ride the elevator – and discuss the World Trade Center (‘they’re so American’, gushes Warhol of the towers). They talk about Warhol’s films in a mysterious underground cinema that somewhat resembles Smithson’s Partially Buried Woodshed (1970); in Central Park they wonder whether the vanishing point of classical perspective has not, in the case of Warhol, been dispersed across the entire canvas.

What Anton has written, however, is rather more than an expertly ventriloquized reconstruction of a meeting that is too good to be true. Certainly Warhol’s Dream is punctuated with knowingly typical utterances – B: ‘A document is always an artifact of the disappearance of its object.’ A: ‘Sure.’ – and apt quotations from the artists’ writings. But it is also, more ambitiously, a book about the whole history of the dialogue as a critical genre, from Denis Diderot’s invention of modern art criticism to the current ubiquity of the interview and the printed panel discussion. What Anton stages, with admirable seriousness and wit – ‘will you please stop using that word’, chides Warhol after one ‘dialectical’ too many from Smithson – is the essential absurdity of such exchanges, their inevitable descent into entropy, their skirting around the fundamental finitude that the voices are meant to forestall. Comically, Bob and Andy knew all of this in advance: ‘I think we’re dead’.