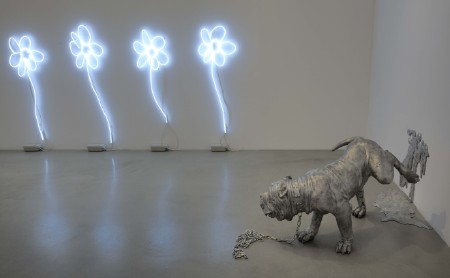 Opened in 1999 as a small space dedicated to photography in the St. Germain neighbourhood of Paris, at a time when many galleries were migrating to the 13th arrondissement, Kamel Mennour rapidly carved out its own identity in the French art establishment. Despite signing up artists such as Daniel Buren early on, it has remained under the international radar when compared to similar galleries such as Emmanuel Perrotin. For its tenth anniversary group show, ‘10 Printemps en Automne’ (Ten Springs in Autumn), the gallery offered less a historical account of its decade of activity than a summary of where it stands today. Contributions from Kader Attia and Adel Abdessemed, for instance – whose careers were partly launched by Mennour but have since left the gallery – were absent.

For the occasion, French Minimalist veteran François Morellet outlined the exterior courtyard wall of the gallery’s 17th-century townhouse with an arched neon installation (Untitled, 2009). In the first room, Sarkis’ ‘Kriegsschatz (avec les 12 objets du Museum Völkerkunde de Berlin)’ (War trophies [with 12 objects from Berlin’s Völkerkunde Museum], 1984), a series of photographs of tribal artefacts reproduced on perforated sheets as though lifted straight from the museum’s archives, were placed in dialogue with Camille Henrot’s Film Spatial (2007). Here the camera travels across visionary architect Yona Friedman’s apartment, settling on details from the cover surfaces of his library to swirling multi-coloured baubles. In the adjacent room, Larry Clark’s black and white photograph of a naked teenage couple having sex (Untitled, Oklahoma, 1972) and an undated self-portrait of Pierre Molinier dressed as an S&M transvestite (Le Chaman) were slotted into the recesses of washed-out black and white striped canvases from Buren’s 1983 ‘Corridorscope’ series (No. A04 and A06). The kinky undertone of the presentation contrasted with Alfredo Jaar’s cool and dignified imageless black lightboxes created in response to the Rwandan genocide (Unseen [100 days in 1994], 1997).

These formally taut ensembles were intersected by the more overt statements that punctuated the space: Huang Yong Ping’s aluminium sculpture of a Neapolitan Mastiff peeing against a wall and its accompanying North-America-shaped puddle (Amerigo Vespucci, 2003) and Sigalit Landau’s shrill neon back-up heaters (Home...less, Come...home, Go...home, Home…alone, all 2009). Despite a general impression of neon-light overkill – Claude Lévêque’s neon flowers (Élie, 1990) were also included – a cheap and exhilarating thrill was generated from this cut-to-the-chase criticism of American imperialism and interrogation of geographical belonging. The other works on display, including an installation by mathematician-turned-artist Miri Segal (There is no there left, 2008), the assembled archives of Tadashi Kawamata’s 1988 ‘Roosevelt Island Project’ (Cabinet, 2009) and a series of numeric photo frames by Zineb Sedira (‘The decline of a journey’, 2009), tilted the balance towards the more sober and cerebral. Nevertheless, the surprising combination showed that the gallery could pull off a museum-quality display while keeping its gutsy, self-assured edge.