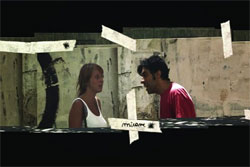 Given that the 15th ‘Videobrasil’ was housed in São Paulo’s sprawling, Lina Bo Bardi-designed SESC arts complex, and that it featured the work of 200-odd artists, one might have expected it to take up a lot of space. This, though, was not the case. In place of the usual hangars full of humming projectors and haemorrhoidal seating, curator Solange Farkas offered a modest nine-screen exhibition space, an auditorium cum screening-room and (crucially) a video library where visitors could pick any piece from the festival and view it on their own personal monitor. No sonic bleed, no beginning to watch a work when it’s already half-way through (an experience that turns even the most linear of videos into a nightmare of sub-Tarantino splintered narrative), this was an elegant solution to limited space, and one that appropriate to the medium it presented – a sort of iPod biennial.

Visit some large international exhibitions after their vernissage, and you feel a palpable sense of entropy. They seem somehow shabby about the edges, all blown light bulbs and broken AV equipment, as though opening to the public were nothing more than a grudging penance for the fizz of the VIP preview. Cleverly ‘Videobrasil’ avoided this by choosing to present a rolling programme, with fresh works screened every evening, and performances (notably by Coco Fusco, Ingrid Mwangi and Detanico Lain) and symposia staged throughout its three-week run. This may seem like a small detail when rubbed up against the grand stuff of, say, thematic ambition, but it spoke of the festival’s thoroughly democratic intent. Thronging with artists, curators and (hey!) casual visitors, every night at SESC was opening night.

While ‘Videobrasil’s structure was inspired, the quality of the works on show was wildly variable, with nearly equal quantities of diamonds and dross. In a sense the open submissions policy of the festival’s principal strand, ‘Southern Panoramas’, which focused on the work of emerging artists from the southern hemisphere, made this inevitable and led to a programme that made up in anthropological interest for what it lacked in internal coherence. (Fast-forwarding through the hundreds of submitted works, the most common tropes seemed to be a Dominique Gonzalez-Foerster-type emotional geography, screensaver aesthetics and the fetishization of race.)

The festival, then, may have been an electronic jungle, but navigational tools were available in the form of its sociable buzz of recommendation and rumour. With a few nods and winks from other visitors one could create one’s own show-within-a-show in the video library, full of fantastic works such as Federico Lamas’ Roger (2004). Here a single travelling shot follows a couple who storm off in different directions following an argument, their dog running helplessly between them like an avatar of lost loyalty. It could be a scene from a Wes Anderson movie, if Anderson could be relied on to strike the perfect balance between whimsy, humour and heartbreak. Equally romantic, but in a very different way, was Cao Guimariles’ Concerto para Clorofila (Concerto for Chlorophyll, 2004), a film in which we see a rainforest through various colour filters, as though its trees have evolved some souped-up new system of photosynthesis with which they’ll make themselves even more absurdly beautiful, the better to draw our attention to our own brutal ecological vandalism. The politics of landscape also came into play in Roberto Bellini’s Landscape Theory (2005), in which the artist films the fields and skies of the American Midwest. As his lens hovers over the pink clouds, we hear an off-screen voice command him to put down his camera, fearful that he’s a terrorist on a recce gathering footage of the nearby dam. Perhaps such attitudes are what rendered Nesrine Khodr speechless in her excellent Several Inadequate Things to Say and Do (2004), a collaboration with Jeremiah Day in which the artists attempt to teach a class on the history of Israel. Day is loquacious, but when he begins to question the Lebanese Khodr (‘do you want to talk about Palestine […] do you want to talk about Arab youth?’) she keeps schtum. Sometimes silence, a refusal to turn one’s life into one of a number of competing narratives, is the only form of political resistance there is.

Perhaps the strongest work in ‘Videobrasil’, though, and the one most emblematic of its sometimes brilliant, always unpredictable openness, was Axel Weisz, Laura Taffarel and Thiago Villas’ Operaçáo Cavalo de Tróia (Operation Trojan Horse, 2004), a documentary about kids from Brazil’s favelas attempting to crash a large scale rave. Turned back again and again by an army of bouncers, they eventually inveigle their way in. Asked by the filmmakers why he hasn’t thrown them out, the head bouncer replies simply, ‘Because they are warriors’. The best parties, of course, are open to everyone, whether they’ve bought a ticket or not.