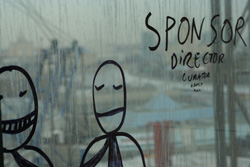 Pinning anything on the ‘Moscow Biennale’ requires a parallax view. Its aspects change from the alternate perspectives of West-and-East or centre-and-periphery. Not to mention the face-off of critique and market or, to put tongue in cheek, negative dialectic and dialectical materialism. The Biennale, co-ordinated by Joseph Backstein, and curated by Backstein, Daniel Birnbaum, Iara Boubnova, Nicolas Bourriaud, Rosa Martinez and Hans Ulrich Obrist, was installed in multiple venues throughout the metropolis, and divided between ‘Main Projects’, ‘Special Guests’ and ‘Special Projects’, each of which appeared to target different audiences and was afforded different resources by the Biennale organization.

There’s little doubt that the Biennale organizers ramped-up the legend of Moscow as somewhere impossible to get anything done on time, to create a ‘what you see is what you get’ ambient. And it’s in this spirit that one has to treat the rough-shod nature of the majority of the exhibition's installations – following a tradition established by the first Biennale in 2005. (A tacit agreement to ‘not see’ the indentured Tadzhiki labourers slaving on the venues and installations also spread amongst the visitors).

From a Western perspective, the five international ‘Main Projects’ looked all-too-familiar, comprised of artists/works that were exhibited on hi-rote in 2005–6. A case in point was ‘USA: American Video Art at the Beginning of the Third Millennium’, a collection of video works from the successful touring exhibition ‘Uncertain States of America’ curated by Birnbaum, Gunnar B. Kvaran and Obrist, previously staged in Oslo, New York and London. Amongst the ‘Special Guests’ were Matthew Barney with his ‘Drawing Restraint’ series (1987–ongoing) and Cremaster cycle (1994–2002), Robert Wilson with his celebrity portraits fresh off the cover of Vanity Fair, and Jeff Wall, which seemed strangely timed considering the signature works are currently on show in his MoMA career survey (though the selection of light-boxes presented here, depicting domestic interiors in decay, cleaved to their gimcrack installation and the crumbling fixtures of the State Museum of Architecture).

Change views, however, and the exhibitions made better sense. Like many Biennales – Singapore comes to mind – the Moscow event is part and parcel of a larger national/local process to establish a foothold for contemporary art in the new political-economy. (Unlike Singapore, whose government changed longstanding legislation that suppressed freedom of public expression, the Moscow Biennale had to labour under state orders disallowing artworks critical of the Presidency and the Orthodox Church). Moscow doesn’t possess an institutional infrastructure specific to contemporary art, which is why the Biennale is jammed into panoply of institutions that aren’t resourced to deal with the high-finish demands of our trade. It is also why many of the exhibitions run for such a short time (three to four weeks), as the projects’ hosts are ambivalent about the irruption of the contemporary in their programming. However, having witnessed Muscovites visiting in their thousands both the first and second Biennales, I feel there might be justification for the establishment of new contemporary institutions. I wonder at the local audience’s take on the Russian projects, however, as there was an excessive repetition of works from 2005. The worst case was the inclusion of the interactive sculpture Say: I Love You by Andrey Bartenev – initially shown in ‘Stop the Invasion’ at the Multimedia Complex of Actual Art in 2005 – in the light and music sculpture project ‘Son of Lumiere’ at the Moscow Museum of Modern Art (visitors surely remember objects that are some thirty metres long and four metres high). Perhaps the ‘come-backs’ were aimed at cementing artists’ names and oeuvres in the audience unconscious. The Cultural Foundation Ekaterina’s exhibition, 'Movement, Evolution and Art' — tracking the theme of motion in Russian art from its collection — proved that the Biennale is a value marker, as works by the Blue Noses, Sergey Bratkov, and Vasili Tsagolov had all been acquired after showing in 2005 Biennale projects. Elsewhere, the ‘Aziopa’ (‘superflat’) public sculpture project afforded 2005 favourite Rostan Tavasiev the opportunity to turn one of his gallery-based rabbits into a monster-sized cutie (Materialization, 2005) — think the Energizer bunny meets Christo — that is sure to be popular for years to come.

Markets respond to demographics more rapidly than governments, and the Biennale placed as much faith in the ‘oligarchy’ delivering their future-vision as the state. The location of exhibitions at the TsUM Department store and Federation Tower (Moscow’s tallest building) are exemplars; as was the distinct feeling that more money was spent on opening festivities than on exhibition installation. It provided a rich vein for artists to mine; none better than Dragset and Elmgreen’s tarred-and-feathered Rolls Royce Disgrace (2006) – truly a slave to automotive lust – installed in the dilapidated State Architecture Museum that is only metres away from the gleaming headquarters of RR and Bentley in Moscow. Within his field of graffiti in Iara Boubnova’s show at Federation Tower, ‘History in Present Tense’, Dan Perjovschi penned a slogan ‘SPONSOR, Director, curator, artist’ in top-to-bottom diminishing scale alongside two figures joined by umbilical neckties. And Russian artist Oleg Kulik titled his XOS-scaled curated exhibition, full of religion and sex, ‘I Believe’, suggesting there are other forces at play in Russian culture that might deliver a golden sunset.