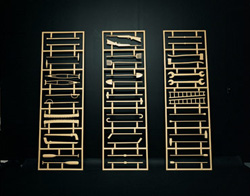 The 5th Asia-Pacific Triennial opened in the Gallery of Modern Art in Queensland on 2 December. The date served as a double inauguration: an opening party for the largest and flashest contemporary art space in Australia; and a coming-of-age party for the Triennial as its flagship event. The Triennial is a show whose regional scope and largesse could be considered grounds for suspecting Queensland of geopolitical ambitions. This year’s event features works by 37 artists housed in 10,588 cubic metres of concrete and 9,134 square metres of glass. Contemporary pieces from Australia, New Zealand and China, installations from Vietnam, experimental films from Thailand and indigenous textiles from Polynesia are juxtaposed with a grace and seriousness that evokes a generally pleasant sense of art as a mediator between cultures.

In accordance with its status as the largest consumer of Queensland’s mineral products, China provided a strong contingent. Most of these works belonged under the umbrella of the Long March Project, a group of artists and curators who set out to retrace the steps of Mao Tse Tung's 1934–5 epic journey – the retreat that ended in victory – in a bid to unify their research, production and exhibition, and to bring contemporary art to China’s rural communities on the way. It sounds subversive, but it’s not. As its chief curator Lu Jie observed in his catalogue text: an art practice that adopts the notion of ‘Oppose Discursive Hegemony’ as its mantra would just be a tool of neo-colonialism. So, instead, the de facto motto of the Long March Project artists seemed to be ‘Reinforce Discursive Hegemony’; a clever move decisively demonstrated by the Triennial curators dropping all but the most sanitised images from Mu Chen and Shao Yinong’s ‘Assembly Hall Series no.6’ (2006). The large-format photographs of regional communist assembly halls originally included venues that have since been transformed into karaoke bars, restaurants and houses of dubious repute. The only images hung in Brisbane, however, were those of halls that have been endorsed by the government as cultural tourism sites, leading to speculation that the Chinese foreign ministry had made its presence felt even here.

Ai Weiwei, co-designer with Herzog & De Meuron of the National Stadium for the 2008 Beijing Olympics, had the wherewithal to keep his distance from the Long Marchers, both figuratively and literally. His work was on show in the refurbished Queensland Art Gallery, and included Dropping a Han Dynasty Urn (1995), which documents the destruction of a genuine, first century AD hu (wine jar). The work conceals a covert reference to the Cultural Revolution behind its overt reference to the fetishization of antiquities; a layering of allusions that was comprehensively missed by the local critics.

Australian audiences had no such trouble decoding New Zealander Michael Parekowhai’s installation, Acts II (1994). His axes, spades, saws, rifles, cannons and crutches were presented as if part of a giant, die-cast-plastic toy set; an intelligent parody of the great game of colonization. Parekowhai’s work stands in fertile tension with that of the great historical fabricator, Michael Stevenson, whose brilliant installation, Argonauts of the Timor Sea (2004), recreates the misguided attempt of the Australian artist Ian Fairweather to emulate Thor Heyerdahl by crossing the Timor Sea on a small homemade raft in 1952. Fairweather never made it, being first shipwrecked on the small island of Roti before being deported by the local authorities. Stevenson’s installation included both a reconstruction of the ill-fated raft as well as faux scientific paraphernalia apparently evidencing the trip. His work explores the genre of ethnographic diorama – a genre that, as the Fijian writer Vilsoni Hereniko remarked, ‘always displays its subjects as dead’.

Hereniko was not commenting on galleries, but Stevenson’s work hinted at an affinity between the in vitro presentation museums favour, and the Triennial’s tellingly clean hang. The off-space events were comparatively weak, and the involvement of the local artist-run scene desultory at best. Thanks to generous acquisition funds, roughly 70 percent of the works in this and previous Triennials have been acquired for the gallery, a forward thinking policy, as each new reiteration of the event deepens rather than erases the legacy of the one that came before. But a lone exhibition space can only indirectly contribute to the creation of a creative metropolis. As Ai Weiwei observed in a panel discussion during the Triennial, ‘to take an artist to a gallery is like taking a returned soldier to a war museum. It is just a source of suffering and embarrassment ... and should be forbidden’. A point he then underlined by not turning up to any of his scheduled artist’s talks.