So far, documenta 13 has been defined by the personality of its artistic director Carolyn Christov-Bakargiev. And that is a tragedy for the art and the artists, whose names were finally released yesterday. What has been described as one of the most exceptional exhibitions in the world – in a painstakingly careful and strikingly intelligent way by Christov-Bakargiev herself – has been overshadowed by antics. 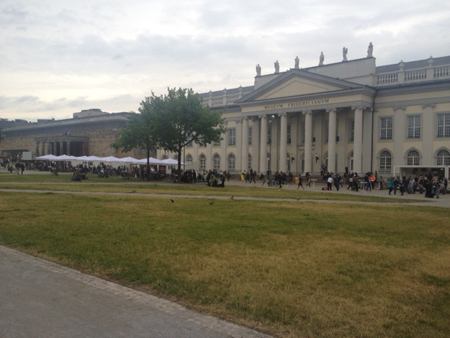 A perfect example is the opening press conference, which must have left the German government officials on stage wondering why they had given millions to the event. I wondered why the head of the German Federal Cultural Foundation Hortensia Völckers sent her colleague Alexander Farenholtz to talk on stage instead of talking herself. Christov-Bakargiev – who believes dogs should have the vote – did refrain from bringing along her best friend Darcy, as she has done in the past.

After offering a round of thanks, she delivered a long-winded lecture, which even she seemed to find boring. As she kept on skipping through pages and pages of her monologue – which touched on everything from dancing protons to social networking – the audience laughed and then applauded. In fact, this 16-page lecture was not only intriguing but also in the press kit. Why read the text aloud to hundreds of journalists?

During the Q&A, most of their questions were equally long-winded and hard to follow: from the danger of digital exhibition guides to the (im)possibility of attracting a million visitors. Serious questions were brushed aside, including one about Stephan Balkenhol. Last month, the artist installed a sculpture of a man in the tower of the Sankt Elisabeth church located just across from the Fridericianum – much to the dismay of Christov-Bakargiev. Soon after, the long tradition of the church complaining about art came to a swift end.

In a press statement, d13’s managing director Bernd Leifeld said she felt ‘threatened’ by Balkenhol’s work, which she qualified as ‘an intrusion upon documenta’s freedom.’ At yesterday’s press conference, she didn’t have any clarifications to add because she had been too busy to follow the ensuing scandal – an answer that provoked boos from the audience.

Perhaps what’s most offending about Balkenhol’s sculpture – a little man atop a golden globe – is its symbolization of the anthropocentrism that Christov-Bakargiev is trying to take apart with this documenta. That’s why dogs are like people who are in turn like plants and objects who should all have the right to vote.

The problem is that a human cannot decentralize anthropocentrism, nor tell animals, plants and objects to vote, let alone equate their struggles. When one human being decides that humanity should be displaced from the centre of the world – when one curator feels threatened by a sculpted man in a church tower – that’s not only anthropocentric but also over-controlling, if not somehow dictatorial.

The most surprising revelation from the press conferences is that much of the exhibition is still to come. documenta 13 runs in Kabul from 21 June to 19 July; in Cairo from 1 July to 8 July and in Banff, Canada, from 2 August to 15 August. Alas, there’s no shuttle bus… The calendar of public events When What is as thick as a national train schedule. The slowest day – September 3 – has eight events, from Alberta Serra’s performance The Three Little Pigs to a screening of films from Afghanistan. In short: Forget trying to see everything.

And some of the exhibition has already taken place – without public knowledge yet with public funding. Last February, there was a seminar at Kabul University with speakers like Christoph Menke, Goshka Macuga and Hameed Naweed. Soon after, Mousse magazine from Milan ran a seminar in Kabul about ‘Creating an art magazine: Testing the grounds/Finding the language’.

Such projects – not really public, not quite transparent, not fully accessible, already over – are the real intrusion upon the freedom of documenta which began as an attempt to reunite art and democracy after the excesses of fascism, like disenfranchisement. At a time when many people around the world still cannot vote – including many American citizens who are serving or have once served jail terms – to call for canine suffrage is embarrassing. To use documenta to make such statements is just sad.

There was an explanation for the antics – sort of. Christov-Bakagiev spoke of sending out decoys so the artists could work undisturbed by the press. But how could such interruptions occur when the artists list was just released? And shouldn’t the artists be allowed to determine their relations with the press? Shouldn’t the centralism of the curator fall with anthropocentrism?

Towards the end of the press conference, Christov-Bakagiev criticized that 1970s feminist motto: the personal is the political. Here, the personality took over the politics of the exhibition. On the good side, someone’s personality can resemble what many consider good art: provocative, annoyingly hard to forget, leaving you squirming or hopeful in an embarassing way that reminds you of all the hopeful yet embarassing things that you’ve ever said and done in your own life, or totally kitschy in a way that combines the beautiful and the grotesque, the intelligent and the silly.

On the downside, the art works start to be understood through the curator instead of through the artists. To her credit, Christov-Bakagiev noted that her opinions were not necessarily those of the artists. It remains to be seen if the rest of the show can rise above the antics. With 99 days left – and hundreds of events – such a revamp is possible, although it will be hard to liberate the art from the massive theoretical framework that has been created by the artistic director, from dTours to conferences to notebooks.

One could argue that documenta 12 never fully recovered from the media troubles that seemed to plague Roger M. Buergel who was known to look at ceiling during press conferences. In contrast to Jens Hoffmann, I would not argue that the next documenta should be curated by an artist. But the next director should start with a course in public and international relations. While documenta has remained in Kassel, the art world has gone global – an expansion that brings massive media attention and demands to each artistic director. Today, curating documenta is like heading an international public relations organization – except the candidates don’t get years of diplomatic training before taking on the job.

Christov-Bakargiev did make one great comment which also brought a round of laughter from the audience. ‘This is serious – this is documenta!’ Yes, exactly. Please close the curtain and let show begin.