BY Catrin Lorch, Translated by Nicholas Grindell in Reviews | 03 MAR 07 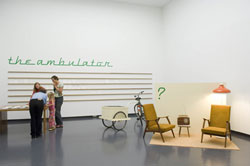 After its initial outing in Hamburg, the ‘Academy’ project – initiated by Angelika Nollert from Siemens Arts Program and consisting of exhibitions, lectures, symposia and workshops – was officially launched in September 2006 at the Van Abbemuseum in Eindhoven and the Museum van Hedendaagse Kunst in Antwerp. The intention, as outlined by Irit Rogoff, Professor of Visual Cultures at Goldsmiths College and one of the collaborators on the project, was for the Academy to act not only as a tool for implementing the goals of the ‘Bologna Accord’ (the agreement signed by 29 European countries in a bid to increase uniformity in European higher education), ‘but also as a space in one’s own biography, as classroom, kitchen and pub…’. ‘The Academy’, wrote Rogoff in the exhibition catalogue, ‘becomes the site of this duality of an understanding of “I can” as always, already yoked to an eternal “I can’t”.’

Whereas at the Kunstverein Hamburg, curator Yilmaz Dziewior had placed more of an emphasis on the training of artists, the show at MuKHA in Antwerp, curated by Bart de Baere and Dieter Roelstraete, featured works that attempt to shake up the triad of artist, viewer and artwork. Joëlle Tuerlinckx’s lines drawn with pens on adhesive tape, for instance, were assembled in ad-hoc geometries on the wall. Under the title Instant Academy (2006), they appeared mobile, fluid; as if they could be altered at any moment according to the demands of display and didactics. Lia Perjovschi’s my art history from modernism till today (1990 – 2004) looked like a sprawling grid of tiny black and white snapshots, a vast canon of images of biennials and museum exhibitions that could easily serve as a checklist for the slide archive of an art history course. But alongside icons like Ron Mueck’s Untitled (Boy) (1999), the giant child who greeted visitors to the 49th Venice Biennale, Perjovschi also included unknown outdoor sculptures, untitled pictures and situations that can only be identified by the artist.

While the installations and interventions at MuKHA succeeded in displacing the viewer to a degree, ultimately they remained legible works within the context of the institution. The version of ‘Academy’ presented in Eindhoven, however, offered up the Van Abbemuseum itself for discussion, although the show intentionally deconstructed the building more than the institution – with uncertain, and ultimately contradictory, results. In seven rooms in the basement, the structure of the museum was exposed and examined. Much of this material, like The Ambulator – a room devised by Janna Graham, Valeria Graziano and Susan Kelly – was meant to involve and activate visitors via self-formulated questions. These included ‘1. Select a question and a destination 2. Answer it while taking a walk (with a friend or a stranger) 3. Leave a question behind’. But ultimately, it was an endeavour that lead nowhere. This combination of mechanisms worked better in pieces such as Imaginary Property, in which Jan Gerber, Susanne Lang, Sebastian Lütgert and Florian Schneider, in collaboration with Willem Jans Renders, arrived at a form of installation using monitors, slides and computer screens to document an extensive survey on the question: ‘What does it mean to own a picture?’ When the registrars, dealers and restorers at the museum were asked this question in relation to the recent purchase of an El Lissitzky painting for the collection, the results showed they regarded it as their property, as did Charles Esche, the museum director responsible for acquiring it.

Together with Kerstin Niemann, Esche devised ‘yourspace’, an arena within the museum for hosting informal presentations by artists and activists. The title ‘yourspace’ obviously evokes that of the online social networking website ‘myspace’ and, fittingly, the décor of the Eindhoven ‘yourspace’, designed by Mårten Spångberg, was suitably intimate: a midnight blue velour carpet and a pleated fabric canopy. Guests invited to speak there ranged from the local bishop to the neighbourhood police officer responsible for control of prostitution, and this series of events was clearly envisaged as a kind of side entrance to the museum’s talks strategy. Esche, who during discussions and forums could be seen crouched on the carpet pensively drawing patterns in its pile with his finger, decided to keep ‘yourspace’ as a permanent part of the museum after the exhibition closed.

In its Van Abbemuseum incarnation, ‘Academy’ created an atmosphere reminiscent of the complex anarchy of a squat, where everything is allowed but where the meaning of the resulting whole is subject to permanent renegotiation. As such, even the less successful areas of this experiment opened up the sense of possibility for any invention – within the museum or outside of it.