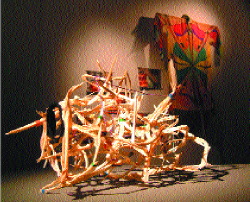 Thirteen-year-old Austen sports a ribboned hat and travels the streets of Whitstable on an electric bike; attached to the rear is a makeshift trailer, piled high with bottles bound for recycling. Occasionally the local youths chase him through the streets, launching missiles in his path. With a top speed of 25 miles per hour Austen evades his persecutors and makes it to the bottle bank, an environmental triumph, replete in Quentin Crisp fedora.

Austen's account of life in a seaside town features in Adam Chodzko's latest publication, Whitstable Interiors (2003): a photocopied DIY lifestyle fanzine along the lines of Sniffin' Glue meets Elle Decoration. The 'odd corners and damp patches' of Whitstable's domestic architecture and the dreams and aspirations of its long-time inhabitants and recent converts, displaced from the urban sprawl, constitute a series of cut-up interviews conducted by the artist. It's a familiar tale, an Aesop's fable of town and country and the prevailing sense of self dictated by one's environment. As Chodzko's title suggests, what we are really privy to, beyond the discussions of home décor, are the interior lives and desires of individuals: an appealingly localized re-take of Smithson's Hotel Palenque (1969-72).

Austen's tale is reminiscent of an earlier work by Chodzko, a poster bearing an image of the artist, caught wide-eyed, marooned on the page, sandwiched between an imploring text: 'Were you a strange child? All people who were strange children are invited together to make a beautiful place for ourselves. Please call Adam for details now.' It's an appealing proposition. What kind of world would that be?
A place of contradiction, somewhere for the soul to rest, for the mind to wander unhindered by cultural middle management and those figures Alexander Trocchi termed 'Grundys' and William Burroughs, less euphemistically, the 'shits'. For some it's a place by the coast and wistful glances beyond the sea line.

Chodzko's move from London to Whitstable roughly coincides with the period of work on display. Three years of projects have been gathered together for the first time as part of this exhibition 'Strangers to Ourselves', an 'exploration of the complex social, political and economic issues surrounding migration both current and historical'. Two documentary slide works present the meeting of disparate social groups. In Cell-a 2006 (2002) Kurdish asylum seekers are placed in charge of the archive of the relocated Cubitt Gallery in London. In The Gorgies Center (2002) a similar relocation places the archive of the Manchester-based architectural practice MBLC - principally in charge of the urban remodelling of the city - in the hands of a community of gypsies near Canterbury. It's a beguiling disruption of information, a distended discussion of the controlled and the controllers.

Design for a Carnival (2003) is Chodzko's latest body of work. The assemblage of Polaroids, skeletal costume and an MDF-packaged dub plate appears at first glance like an exercise in anti-spectacle. The hushed academic tones and sombre hallways of the university campus do little to evoke the mood of carnival. The vernacular of art meets the constituent elements of the carnival procession: music, costume and ritual. Chodzko's dub plate The music from Float 17, as it stops briefly under the fly-over, as it makes its way into the city (2003) replaces calypso, soca and steel drums with a garage house mix of, among others, Joy Division, Peaches, Fela Kuti, Sergio Mendes and Trojan records. A proposal to dress a wind turbine with an outsized psychedelic garment designed by the leading fashion light Jonathan Saunders is propped scarecrow-like against the gallery wall.

A TV monitor in the corner of the room loops through six minutes of Design for a Carnival. On screen a community of ants moves to and fro, arranging a number of scattered sequins; one of the ants stumbles, and the electric blue circle it carries flashes brightly in the sunlight. The video cuts to a group of local kids out on foot, searching the forest. Their attention is directed towards a sapling; grabbing the trunk, they pull the tree to the ground, smashing branches and foliage in the process. Vinyl spins on a record deck, the needle jumps as it hits a cocoon of lace woven around the disc. Back to the kids, who now reconstruct the sapling with coloured plastic cable ties. Springing back to its full height, it represents a crippled totem, a public monument to creative disorder. It's a beguiling plein-air ritual enacted by rural youth: a considered collage of disparate social and anti-social activity book-ended by lace and black vinyl.

An assemblage of bone, cartilage and telephone cable held together with vivid pink, orange and blue thread forms a grisly carnival mask. Mask Filter (2003) was designed to house a video camera - a roving eye forever present in the frame of the lens that is framed by Chodzko's skeletal headwear - a filter of influence as West African voodoo ritual meets the English rural coast.

Baseball Hat Pyre (2003) consists of a series of Polaroid photos pinned to the wall. Burberry check and Nike swooshed caps are ablaze, caught in the orange glow of the funeral pyre: an amnesty of burning peaked cloth. Can the baseball cap, the adopted sign of urban, suburban and country youth, be considered a dangerous symbol? In Whitstable Interiors, when speaking with Austen, Chodzko suggests a crisis of imagination in the local Whitstable youths, evidenced through the conservative nature of their casual dress code. Much despised by the local media, the Chavs - the recent media term for such youth, derived from the town of Chatham - have become the new scourge of suburban and rural towns.

Chodzko spins media cliché, revelling in the desire to find parity in associations far from the beaten track, a future situation where such relationships are valued. Do these constructed social antonyms serve to disturb or reinforce the status quo? These are the inchoate beginnings of a future festival; a carnival for the displaced, the overlooked and the marooned. Chodzko has more in common with the playful revelatory wit of artists such as Allen Ruppersberg and Douglas Huebler than the social instruction and dogmatic rhetoric of his European counterparts. His is a desire to find new relations, removed from existing cliché. In his backyard Austen has constructed two flagpoles: one flies a pirate ensign, the other a peace symbol. For him such polarity is uncomplicated; it makes perfect sense. Long live the strange children.