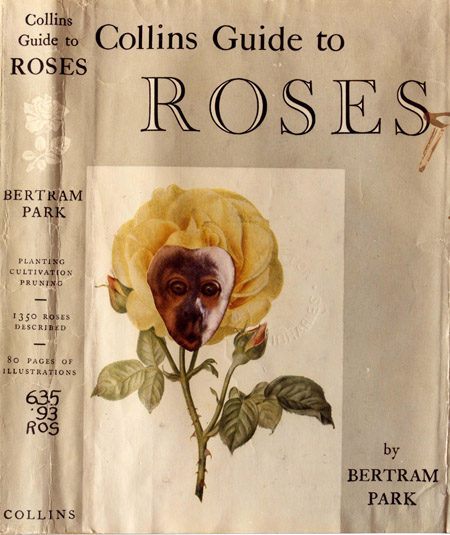 Joe Orton and Kenneth Halliwell’s interventions in library books stolen from their local library in London – and the resulting six-month prison sentence – are by now infamous and well-documented. The six ‘rewritten’ covers included in this exhibition (dated 1959 to 1962) are as cheeky as a seaside postcard, smart as a paper cut. Even though their display – emptied of their bookish innards – is somewhat sad, they have nonetheless lost nothing of their evil alacrity and agile ability to instigate change. It’s interesting to note that the collection of covers shown at the gallery is courtesy of ‘Islington Local History Centre’, indicating a satisfying resuscitation of the criminal to the stately.

The Collected Plays of Emlyn Williams is a meticulously constructed assemblage of typewritten text on white paper. The lines ‘Knickers must fall’ and ‘Fucked by Monty’ are carefully positioned across the front cover and spine; the surety of their graphic situation suggests that they have more right to be there than what’s concealed below.

In conversation with Giles Gordon in Transatlantic Review (1967), Orton observed: ‘One of the greatest things at the trial, the greatest outrage, the one for which I think I was sent to prison, was that I had stuck a monkey’s face in the middle of a rose on something called Collins Book of Roses [sic]. It was a very beautiful yellow rose. What I had done was held up as the depth of iniquity for which I should probably have been birched.’ And indeed the monkey’s surprised little face does ‘dress’ the rose to make its original function as an advocate of hortensial beauty irrelevant, unsettling any notion of the value of the original by aggressively prioritizing reading (and by inference writing) practices that are hyperactive and extramundane.

Adam Gillam’s sculptures look like they do not belong. Very Peculiar Orders (all works 2011) functions like a diffident device for reading the wall behind it, constructed from transparent yet scratched acrylic, disabled door-stops, tired enamel paint and a single length of black string drooping like a badly drawn smile, this work hung nervously, looking like it would greatly prefer to be on the floor. This discomfort as formal strength oddly recalls Rodney Graham’s Reading Machine for Lenz (1993) in its insistence that it be looked through rather than at.

Murder Mystery, an impoverished Tatlin’s Tower, leans to the wall for affection. Its two aluminium uprights are in a direct state of address to a chlorochrous halo, whilst one black and one blue file binder hang on for dear life – or do they? The reciprocal nature of Gillam’s materials is very unstable, with a definite suggestion that their plasticity is comprehensively contingent on the moment. All five of his works in this exhibition are dated 2011, which with an opening date of 13 January suggests Gillam’s new year was a flurry of production. Even if not strictly true – in the sense that the works may not actually have all been made in just 13 days – this decision to date works to the ‘now’ is essentially anti-textual, snubbing imposed relation through location.

Tactically, Gillam’s sculptural works sit well with the disaffection of Halliwell and Orton’s actions, doing much work to encourage an examination of that which they think they are already familiar with. As Orton observed, a significant part of the process of their rewritings was the return to Essex Road library: ‘I used to stand in the corners after I’d smuggled the doctored books back into the library, and then watch people read them. It was very fun, very interesting.’

The ‘return’ as volitive moment here is key to both Gillam’s and Halliwell and Orton’s methodologies, for it is – as Jacques Derrida might have it – ‘future-producing’, creating a narrative endpoint of reception, predicting the viewer or reader’s return before they could even be aware of it themselves.