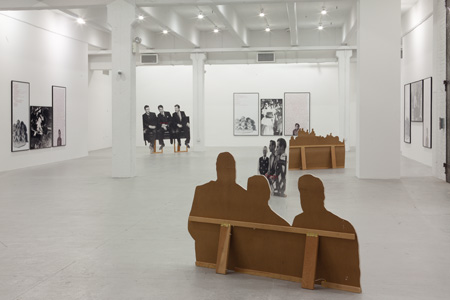 Adrian Piper’s work is full of imperatives – but those imperatives often operate as a double bind. That is to say, although she is interested in the process of Louis Althusser’s theory of interpellation – whereby the subject is ‘hailed’ and installed into a given social structure – she is also interested in the inconsistencies that can arise both in reaction to and within authority itself.

The imperatives that filled Piper’s mini-retrospective, ‘Past Time: Selected Works 1973–95’, at Elizabeth Dee’s new space in Chelsea were designed not only to draw our attention to the fact that we are always functioning within society and therefore under the auspices of the law – they question what it means to be a functioning member of society in the first place. Ironically, the answer, as articulated in these little-seen works is often tied up with sensations such as confusion, guilt, indecision and other so-called socially unproductive responses.
What It’s Like, What It Is #2.1–2.7 (1991) was installed throughout the main gallery space, and features supersized black and white photographic cut-outs, with ‘Forget’ silkscreened across in red. The images range from men in slick suits to protestors; people huddled against the cold to grinning figures of privilege in argyle sweaters. Forget, yes – but forget what? It’s unclear to whom the injunction is issued – to the gallery visitor, the figures in the photographs, the artist herself, or perhaps some unknown embodiment of historical record. The gap that is opened up between the clear command and the action that follows is in a sense typical of Piper.

Vote/Emote (1990) is a simple installation of four voting booths, each with a lightbox displaying an image from the civil rights struggle. On a shelf below the windows, visitors are invited to write in notebooks in response to the directives: ‘List the fears of what we might know about you’; ‘List the fears about what we might think of you’; ‘List the fears of how we might treat you’; ‘List the fears of what we might do with your accumulations.’ Posed within the context of the voting booth – at once an expression of state authority and a presumed symbol of democratic process – the questions occupy the realm of surveillance, institutional authority and knowledge. But the visitor responses here were by turns self-indulgent, flippant, earnest and new age. They are fragments of a different era to the era from which the questions are posed; Vote/Emote reflects both the atmosphere of 1990 and 2010, and also evokes the divide of the decades that intervene.

It’s worth pointing out that Piper was working in the field of relational aesthetics before it was designated as such. The practices of many of the artists currently using these strategies propose a kind of affirmative, holistic world of connections. In many ways, Piper does the exact opposite. She insists upon a hard line against the formalization or aestheticization of specific situations. As she wrote in Selected Writings In Meta-Art, 1968–92: ‘I actually am a great fan of aesthetics and thinking about things formalistically and making aesthetic judgments. But there are times when I think it is inappropriate to do that, particularly when aesthetic judgments are used as a way of obscuring information that deserves to be heard and grasped on its own.’ This is Not the Documentation of a Performance (1976) features a newspaper image of squatters in front of a church in New York, with a placard that declares: ‘This is not a performance’. Art is not everywhere. Piper posits a world in which interaction takes place all the time, but is not necessarily art, and does not necessarily draw forth a world of previously unseen connection.

What emerges is a world of troubling disjunctions. In the journal that is part of the installation The Big Four-Oh (1988), Piper writes: ‘At 40 I am barely visible, the ghost in the machine.’ Piper never posits a world of simple connections, and never aestheticizes their transience. Instead, the task she faces is to consider the reasons for the instability of interactions, and to render them visible.