Only later, reconstructing my visit, did I realize SALT Beyoğlu’s elevator had both deposited me into stratified earth and lifted me amid exploding fireworks. This feeling spanned the three floors of Akram Zaatari’s survey exhibition: a tender tryst of inward- and outward-bearing forces, graveness defused by airy affection, and vice-versa.

Zaatari has long used archaeological metaphors to discuss his work as an image-maker, curator, writer and archivist. (Over a decade ago, the curator Catherine David ventured ‘aesthetic practitioner’ to characterize the hybrid approaches of Lebanese artists, among them Zaatari and his sometime collaborator, Walid Raad of the Atlas Group.) It’s a concern thematized on the exhibition’s first floor, which was titled ‘Acts of excavation and their reverse, archaeology and its opposite’. Here, a litany of light boxes, screens and c-type prints – new and old works – clustered around the video Ain El-Mir 23.11.2002 (2002). In this film, an edited version of which became the 2005 work In This House, a gesticulating crowd lingers at the edge of a hole deepening through the methodical labour of a single man. Somewhere in this suburban garden, apparently, is a letter, sealed in an 82mm mortar shell, addressed to the displaced Christian family whose home was occupied by members of the Lebanese resistance following the Israeli forces’ withdrawal from the town of Ain el Mir in southern Lebanon, in 1985. Zaatari’s eager continuous-take video lurches and zooms, bustled by onlookers, a handicam incantation for its object to appear. And then it does: a green tube in dry southern Lebanese dirt. The letter’s author, Ali Hashisho, had buried it after the war ended in 1991. In it, he attempts to justify the resistance’s occupation of the building and, anticipating its future restitution, welcomes the family back into their home.

The reverse gesture – writing and interring an address to a future time – was enacted in Letter to Samir (2008) and, a decade later, in Time Capsule (2012), Zaatari’s project for dOCUMENTA 13, among the works on SALT’s first floor. A screen mounted alongside Ain El-Mir 23.11.2002 displayed video documentation of Time Capsule’s installation in Karlsruhe Park, Kassel. Encased in this raw, partially submerged rebar mesh and concrete structure are scripts reflecting on possible ways of preserving the Arab Image Foundation (AIF) collection in Beirut (a non-profit organization co-founded by Zaatari in 1997, which holds more than 600,000 photographs from the Middle East, North Africa and the Arab diaspora). On screen, an intertitle establishes the provenance of Zaatari’s gesture: at the outbreak of the civil war in 1975, most of the archeological collection of Beirut National Museum was sealed inside concrete blocks to remain in the hall until peacetime. Time Capsule’s anticipatory mode finds an ambiguous form between monument, architecture, functional preservation and sculpture – caught in a moment of its making or unmaking, construction or ruin.

Beyond the videos, a cache of steel rebars lay on the gallery floor, their ribbed contours pronounced in the stray light of LCD screens. Zaatari had cut, disassembled and arranged a version of Time Capsule’s steel frame like an enigmatic exploded view exhibition floor plan. In this form, it was a kind of writing; it was low, theatrical, something to circumambulate, too, opening up different ways of reading the work.

Later, the exploded diagram seemed less elliptical: it pointed to the lift, the third floor, titled ‘Poses and Postures’, and a video work commissioned for the 10th Gwangju Biennial, Beirut Exploded Views (2014). A camera-drone ascends vertically from a compound of unfinished or partially destroyed buildings, establishing the setting as downtown Beirut (splintered concrete and rebar evoke Time Capsule’s structure). Cut to the ground and six characters – builders, soldiers and two listless, barely pubescent men – dwell among these architectural facades, carrying out routines of everyday life. In the absence of dialogue, communication occurs through tethered smart devices, clipped gestures and choreographed dispositions in seemingly ranked architectural spaces. Zaatari is a masterful sculptor of anticipation. A stray wistful pop song, escaping from a smart phone, pierces the film’s emotional flatness, but is incomparable to the culminating display of fireworks over downtown Beirut. Disconnected from devices, the boys gaze (as do we) in wonderment at the spectacle.

Zaatari’s fireworks and exploded views evoke most powerfully what passes unpictured in this exhibition – artillery explosions. ‘Those who have lived wars,’ Zaatari observed two years ago in an article titled ‘The Writing of Banality’, ‘develop an attachment to the banalities around them, which has nothing to do directly with war, but indirectly with its effects and conditions.’ Because the specifics of political struggles and conflict are notoriously transient, he tries ‘very modestly, to practice multiple writings of history: a history of banality.’ (Zaatari’s omission from Tate Modern’s contemporaneous exhibition ‘Conflict, Time, Photography’, in London, was an oversight.) Perhaps Zaatari’s greatest anti-spectacular demonstration of war’s deep psychical effects, screened separately in SALT’s walk-in cinema, is Letter to a Refusing Pilot (2013). It recounts the story of an Israeli fighter pilot who refused to bomb a southern Lebanese school during the 1982 invasion. The film centres upon a diary entry written by Zaatari’s brother, Ahmad, discovered years later. The school, we learn, was bombed by the next pilot anyway. Ahmad notes how his father took them to visit the bombed-out school and Akram took a few pictures. Referring to the Lebanese civil war in ‘The Writing of Banality’, Zaatari makes a generational distinction between ‘those who lived it’ and ‘those who didn’t’. (A theme of Beirut Exploded Views, with its charged finale, is generational modes of bearing witness). The former group, besides developing an attachment to banalities, become ‘infected with apprehension’, and although they may not necessarily describe war better, they ‘speak with it’. 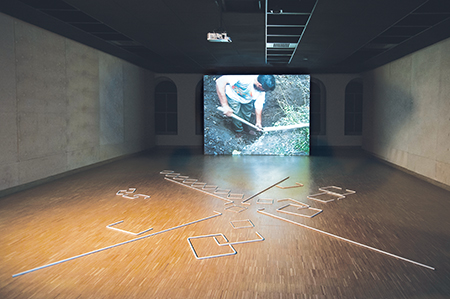 It’s fascinating, then, that the second floor of the exhibition at SALT, which displayed AIF material, should have shared a title with Susan Sontag’s book of essays On Photography, first collected in 1977. Recently, Sontag has been critiqued by Tel Aviv-born scholar Ariella Azoulay for having fallen prey to a kind of ‘image fatigue’ in the face of pictures of war. Sontag, Azoulay argues, simply stopped looking. On the contrary, Zaatari’s work never accedes to the image of war but instead gives the stories of those who lived it, and had little choice but to look.

In the dual-screen video installation, On Photography People and Modern Times (2010), the left frame shows tightly-cropped shots of AIF collections presented for the camera by a gloved woman, while the right shows the person that took each photograph being interviewed before donating it. Each frame shows the same array of photographs seen from a different aspect: frames within frames. Photographs become narrative fragments once displaced from their collections; Zaatari uses the durational medium of video to hold disjunctive views of the same stories together, forming a kind of exploded diagram in which the constituent parts could never form a consistent whole.

The rest of the floor was given to Zaatari’s work with the collection of the commercial photography studio, Studio Shehrazade, established in Sidon by Hashem el Madani in 1953, which now makes up more than half of the AIF’s collection. At SALT, videos presented profile shots of Super 8 projectors from the studio. Although we did not see the projected images, cardboard film cases accompany the apparatus, their bright illustrations suggestively on display. On another screen in the gallery, hands procedurally load a movie camera with film as if in an instructional video. In a framed c-type print, retouching brushes are lined up in size order along the length of a ruler. To its side, large-format c-type prints document the studio’s interior. To the far end of the gallery, cabinets, marked up with Madani’s filing system, stood freely in a line.

On a wall between Zaatari’s representation of Studio Shehrazade and On Photography … hung two uniformly posed black and white portrait photographs of women, their faces and bodies scratched out. One day, the story goes, a man accused Madani of photographing his wife without his consent. When the husband demanded the negatives, Madani refused, finally agreeing to deface them so as to render them unusable. Initially, Madani scratched the wrong negatives, finishing with two sets of scored out portraits. Flexing body builders, fada’iyin resistance fighters with their AK47s pointed towards the sky and same-sex couples kissing all stood before Madani’s camera in Studio Shehrazade; their images are collected in Zaatari’s book Hashem al Madani: Studio Practices (2004). These photographs bear dual provenance: dated once for when they were taken and again for Zaatari’s use. They depict the studio as a semi-public space from which the photographer serves a community, situating the photograph within wider economies of local custom, story telling and politics.

Zaatari’s four-channel video installation, Dance to the End of Love (2011), invites comparisons between Studio Shehrazade and YouTube, the contemporary global public platform for self-expression. Films made by young Arab men from across the United Arab Emirates, Saudi Arabia, Libya, Egypt, Oman, Palestine and Lebanon, are grouped according to repeated actions. Some are bodybuilding, others perform car and motorcycle acrobatics, whilst others sing and dance – a medley of young men, disparate in space and time, assembled in post-production to produce a collective song of longing and loss. Digital photographs multiplied in tiles across the screen show seemingly private mementoes of gay love – small acts of defiance, perhaps, in the context of the largely homophobic region. Collaged videos of buff men pumping iron become eroticized in relation. Jeeps slowly convoy through desert roads on two wheels.

Zaatari’s curation of these videos – pulled from the always-reordering archive of YouTube – builds a context that is a representation of sociality. It elides YouTube’s much-lauded political agency as the broadcaster of political events to examine the quotidian and, in doing so, proposes ways of being together to promote a pan-Arab identity. These films belong to a period leading up to, but not including, the Arab Spring: as is fitting for an artist concerned with the banalities of history, even during revolution. (Islamic State’s deft use of internet visibility – as a tool for apprehending victims and broadcasting executions – is a haunting codicil to this work.)

These recent works – concerned with a form of the archive’s transmission over networks – are in a different register to a new body of work displayed at SALT. In Untitled (2014), illuminated slides, video interviews and documents narrate the story of the Ottoman archaeologist Osman Hamdi Bey’s mission to Sidon, which led to the discovery, in 1887, of a Necropolis containing a Pentelic marble sarcophagus adorned with carvings of Alexander the Great, now in the collection of Istanbul Archaeological Museums.

I wonder whether explosions are the opposite of archaeology: one being a process of slow sedimentation, charged with the preservation of artefacts; the other a dispersive energy flash and the means of their obliteration. At SALT, these twin leitmotifs activated a string of associations: the earth as the greatest archive; the explosion as the archive’s de-sedimentation; explosive terrain as contested land; the memory of a city in ruins written in the sky.

Jonathan P. Watts is a contemporary art critic based in Norwich, UK, where he co-runs the gallery LOWER.GREEN.

Reviews
Jeremy Moon Takes a Rectangle for a Walk