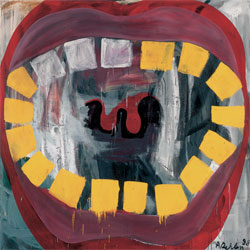 The 70 or so canvases that made up this retrospective were hung in reverse chronological order. As a display choice, this had the perverse effect of suggesting a development reminiscent of Philip Guston’s: from the meanderings of an abstract, essentially formalist, inquiry to the late emergence of an expressive figuration seemingly prompted by a higher moral calling (in Guston’s case the urge to tackle the political evils of the Nixon era). This did not work to Oehlen’s advantage.
Of these early works, hung last, little can be said that hasn’t been written already. They remain some of the least digestible works to come out of Europe in the last quarter of a century, and in that sense some of the most vital paintings to be seen today. The bleak irony that permeates Oehlen’s 1980s world of discarded suitcases, fences, swastika-shaped shelves, Modernist public sculptures, video babes, decapitated tribal art and mocking self-portraits with skulls has lost none of its sharpness. Albeit the product of a different era, a divided Germany in the last days of the Cold War, the ideological drabness of these paintings is still very much our own. The ‘German-ness’ of these works – their sarcastic allusions to a repressed history that was beginning to surface in the public sphere, their predominantly greenish brown tones or the expressive, ‘wild’ application of the paint – is pushed to such an extreme that it seems to implode under its own weight. There is no triumph, no heroism in this breakdown, no romanticism in this failure, not even the solace of misery. The paintings are just infuriating.
Remarkably devoid of pathos, Oehlen’s images emerge from out of stuff that is spattered and smeared: the canvases are soiled rather than painted. Often the motifs are outlined in a darker or brighter colour, as if to ensure his images have the minimum possible readability. The artist arrived at a precarious standstill with a medium whose history and physical properties carry far too much resistance ever to be mastered fully. Obviously this was a high-wire act that could not last. As the artist stated in the interview in the exhibition catalogue, at some point the paintings stopped offering any real opposition; he simply knew how to produce them. So, where to go next?
I’ve always liked what Oehlen refers to as his ‘post-non-figurative’ paintings, which he has been making since 1990. Knowing the context from which they came, and taken together with the artist’s other works, most notably his computer collages, I used to associate them with a mostly American deconstructive practice manifested in, for example, Christopher Wool’s paintings of flowers or Steven Parrino’s wrecked monochromes. Yet within this ambiguous ‘retrospective’ scenario, all I could think of was Gerhard Richter – or, more precisely, of Benjamin Buchloh’s famous 1986 interview with Richter, in which the critic failed to locate the ‘irony’ in the artist’s gestural, abstract paintings. Richter, to Buchloh’s surprise, flatly rejected the term: his paintings were not ‘ironic’ inasmuch as their formal characteristics were dictated by a moral yearning, ‘salvation […] the hope that I can still accomplish something with painting’. As a whole, as each of Oehlen’s new works outdoes the next in a self-reflexive competition of anti-virtuoso virtuosity, the academism of such a Richterian posture becomes overbearing. At any rate, despite their funky titles, these canvases are essentially humourless –and exhibiting themin the museum’s first rooms, which bear the full brunt of the building’s Neo-Classical architecture, with its high ceilings, coloured walls, ornate plinths and all the trimmings, didn’t help.
The two types of works – ‘late’ (but in fact early figurative) and ‘early’ (but in reality latest, ‘post-non-figurative’) – were hung side by side in the Roter Raum (Red Room), one of two ‘painting installations’ executed in collaboration with Heimo Zobernig, situated in the middle of the exhibition, physically separating the two distinct eras of Oehlen’s oeuvre. Originally shown ten years ago at the Kunsthalle Vienna, this room illuminated by bright red fluorescent lights nullifies the chromatic scope of the works exhibited within, which all appear to have been painted in black and white (or, more precisely, in red and greyish purple), thus reducing the paintings to mere images of their former selves. More surprisingly, the differences between the early and the current works (which are here, hung in a strict chronological order) tend to disappear: without the colours, the motifs of the first paintings become less readable, while the blotches that constitutes the cacophony of the abstract works become more graphic.
What this ‘retrospective within a retrospective’ demonstrated was that certain formal properties have indeed been present in Oehlen’s work from the start, and that they have, by all means, become increasingly sophisticated as they have become more and more customary. This was an exhibition of paintings about painting, and nothing more.

Fabrice Stroun is the director of Kunsthalle Bern. He lives in Bern.