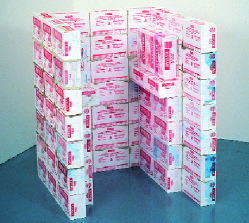 Alex Frost's work is concerned with the tension that exists between illusionism and literalism, and exposes how close together the two can sometimes be. His work has encompassed many styles, linked by his intensive, systematic working method and by his interest in a kind of compromised Minimalism. Frost's cycles of work include prototype Buckminster Fuller domes (1998), Gaudí-esque tiled sculptures (2000) and a series of works from 2002 made after Robert Morris' Untitled (L-Beams) (1965-7). His work, in Claes Oldenburg's phrase from 'I Am for an Art ... ' (1961), is something square which becomes blobby.

For his solo exhibition at this new gallery Frost exhibited two works that draw on these characteristic interests. Untitled (Ear and Coat) (2004) is one of a series of pencil drawings of himself and friends completed over the last year. These graph paper portraits emerge out of a complex system of pixelated squares, circles and dashes. Frost's system is derived from two sources: a computer programme that pixelates photographic images and the method of denotation commonly found in knitting patterns. The pixel is a rational form - but not always. In Michael Crichton's Westworld (1973) the point of view of the murdering android played by Yul Brynner is shown in Pixelvision. Frost's other source, knitting patterns, would also usually be viewed as rational, or conventionally 'safe'. Yet Sigmund Freud wrote in his Studies on Hysteria (1893-5) that needlework and similar occupations render women especially prone to dispositional hypnoid states. The hours of meditative drawing, folding and fixing that characterize Frost's practice have given him an understanding of how systems affect the body, and of how bodies affect systems.

Frost uses the pixel as a way of humanizing the Modernist trope of the grid. There is a link between these works and the work of the German artist Reinhard Voigt, who has been making pixelated representational paintings and drawings since the late 1960s. Voigt has said that his motifs influence the grid, thereby disproving Rosalind Krauss' theory of the grid as mediating against development, leading the artist into an exploration of repetition. However, what Voigt and other 'impure' Minimalists such as Eva Hesse did with the grid is something else - they deliberately imbued the form with traces of the body. An obvious example of this would be Hesse's Accession II (1965), the cube with an interior bristling with fibreglass fronds. The erotic expressionism and sense of interiority found in that work can also be traced in this exhibition.

Ideas relating to rationalization and the body also inform the second work in the show, a sculptural piece entitled Everyday (2004). The work comprises numerous sloppy copies of Ryvita boxes, rendered in offset lithograph, ink, paint and varnish on paper and red pine, which have been messily soldered into a formation somewhat like a barbecue using grab-and-fill adhesive. There is a crucial distinction to be made between this work and Warhol's Brillo boxes of 1964. Frost has printed the basic pattern of the Ryvita packet but then painted and drawn each in a different and self-consciously expressionistic style. As with his pixelated portraits, the slight smudging on the surface of the paper announces his hand again and again, the imperfection of 'free' expression.

Frost's choice of Ryvita, the cardboard-tasting snack beloved of dieters, gestures again to the tension in his work between a masculine Minimalist tradition of modular repetition and a more 'impure' corporeality. Feminist theorist Susan Bordo has suggested that disidentification from the maternal body (wide hips, rounded stomach, large breasts) may symbolize, as it did in the 1890s and 1920s, freedom from reproductive destiny and a constricted 'feminine' social role. In this sense, calorie counting could be seen as a rather twisted route to autonomy. And like the act of following a knitting pattern, adhering to a systematized diet plan brings a weird contained freedom. In working on these ideas Frost deliberately destabilizes our sense of what is contingent and what is given. His work can be seen as a kind of monument to rationalism usurped by the very blobbiness of its construction.