It’s rare to see an exhibition of recent work that concentrates purely on form – a show that demands nothing in the way of a press release or artist’s statement to understand, but that just requires you to really attend to the things on display. Studio Voltaire’s pair of exhibitions by Alexandra Bircken and Doreen McPherson did just this. As someone who began writing about contemporary art in the mid-2000s – a time when most artists’ work seemed to be either ‘relational’ or ‘referential’ – I was somewhat thrown: what do I write when it’s just me and the work?

Bircken presented six sculptures, all positioned in direct contact with the fabric of the former chapel that houses the gallery. Placed on the grey concrete floor in the centre of the main space, thin rectangles of mirror formed a larger rectangle with two central symmetrical holes – shaped like an angular figure of eight or a cassette tape – which reflected the peaked wooden ceiling above (Abyss, all works 2011). On one wall hung a square object made from a lattice of four branches painted grey, onto which 16 pouches were woven in thick string, with holes in the middle – like a large Noughts and Crosses board, on which there is only one player (Birch Field). Leaning opposite was a square of matt sheet-metal which was covered in a layer of thin horseshoe shapes, creating an elegant chain-mail effect (Uknit S.V.). Hanging close by, another net of four by four lines was made from bandages stitched together at the intersections and coated in grey clay, transforming it from floppy material to solid object (Extent).

The final two sculptures were placed in a corner at the back: on a step lay a seashell-shaped lump, its wool-like exterior sprayed in bronze paint (Knochen). Behind this a long test-tube-like form leant in the corner, formed from an intricate weave of cassette tape in matt black and shiny grey (Hose). Bircken’s transformation of soft textiles into hard sculpture and, inversely, hard forms knitted together to make textiles seems a contemporary response to the language of form used by post-Minimalists such as Robert Morris, whose signature felt pieces are both textile and sculpture. But Birken also evokes the feminist concerns of Morris’s contemporary Lynda Benglis, whose ‘Fallen Paintings’ (1968–ongoing) of flowing latex were a response to the machismo of her AbEx and Minimalist predecessors. 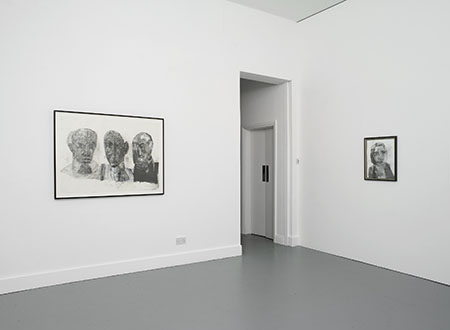 In Studio Voltaire’s smaller gallery, McPherson exhibited six graphite pencil drawings with touches of white crayon. In Two Heads, for example, a male and female head face one another, floating dramatically on an opaque graphite background, like plaster busts that have been cut off at the neck. Heavy lines create sharp, flat angular planes, yet more intricate details – such as a strange bonnet over the woman’s curly hair – break up the stark, almost sculptural forms of light and dark – as a meek man faces up to a Victorian-esque matron. The man is all staring at me is a smaller portrait of a head: less angular, although still dense, lines depict a flattened, slightly wonky face. Big eyes, which seem confused and out of place, float in a wobbly bone structure, exuding sadness. In each of the drawings, a face is fraught with expression, projecting both personality and emotion, giving them an affective presence.
In an interview published in International Sculpture magazine in 2001, Harald Szeemann noted: ‘Artists, like curators, work on their own, grappling with their attempts to make a world in which to survive […] the artist finds a way to form his own world and live his obsessions.’ This is apt in relation to this pairing of artists: each seems to have lived with their respective obsession and, through this process, their attitude has definitely led to form.