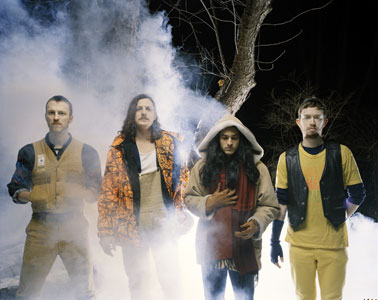 Hipster listening habits could be defined by their fickleness, but The Velvet Underground are a perennial favourite. Although Lou Reed’s Beat existentialism and John Cale’s tutelage under La Monte Young sometimes made the band seem more a product of the 1950s than of the ’60s, the fuzzy guitars of their début The Velvet Underground and Nico (1967) has influenced 40 years’ worth of sub-genres and black-clad thrift-store shoppers.

Yet the musical reference points of a recent clutch of bands have been audibly and admirably more disparate. From TV on the Radio’s overdriven gospel to Animal Collective’s camp-fire songs and even to the wails and fractured percussion of Gang Gang Dance, young contenders now favour their psychedelia filtered through hymnal chants and Eastern note-bending (plus optional approximated West African rhythm section, if you please). Cynicism seems to have been traded for rejoicing, while Fenders have been swapped for tablas.

Yeasayer, a four-piece from Brooklyn (via Baltimore), describe their début album All Hour Cymbals as ‘Middle Eastern-psych-pop-snap-gospel’. Like Panda Bear’s highly praised Person Pitch (2007), much of the album was composed using a laptop while retaining the jam session’s loose sense of organic progression, with drones and multi-part harmonies underpinning the patchwork vocal pop. Indeed, the most successful efforts sound as though the band are trying to play two songs at the same time: the stand-out track ‘Forgiveness’ begins as a skipping drone before veering into a tricksy acoustic guitar figure and harmonized folk. The technique is repeated on ‘Wait for the Summer’, which around the midway mark ditches synths for a gentle sea shanty.

The criticism fairly levelled at some of the band’s contemporaries is that they’re essentially disengaged, sounding as though they have decamped for sing-songs and thumb-piano sessions in some sylvan commune. Not so Yeasayer, who are at their best when declaiming pre-apocalyptic anxiety with poppy hooks, as with their single ‘2080’ (‘I can’t sleep about the times we’re living in’), but at their worst when hand-wringing slips into doomy melodrama, as on ‘Wait for the Wintertime’, which is basically Black Sabbath recorded on a four-track.

Coincidentally or not, 2006 saw the re-release of My Life in the Bush of Ghosts (1981), David Byrne and Brian Eno’s pioneering album of electronics, haunted by the unfamiliar voices and rhythm of dozens of ‘world music’ samples. Byrne and Eno initially planned for My Life … to be presented as an ersatz cultural artefact, recovered out in the Mojave desert; there is a sense of the ethnographer’s curiosity but also a cultural remove: Arabic singers, evangelists, radio talk-show hosts and preachers are still presented as curios. All Hour Cymbals succeeds, in places, at a convincing internalization of the references that My Life … ushered into the mainstream. As may be expected from a band who grew up with Fela Kuti reissues and Michael Jackson as much as with The Cure, the songs’ sense of otherness is neither insisted on nor particularly mannered. Instead, reference points are murky, often surprising, even questionable: the outro for ‘No Need to Worry’ threatens Prog Rock, ‘Germs’ boasts a synthesized accordion and ‘Waves’ has a one-finger piano line that recalls Ryuichi Sakamoto. Yeasayer are Indie pop, for sure, but (like Byrne and Eno) adept at skewing the genre Eastwards, assembling an imagined place from where the West may be observed at a remove. Yet this deliberate naughtiness is also palely subversive; the band’s careful exoticism does not engage with the failure of the US’s current foreign policy so much as share its generic idea of the East.