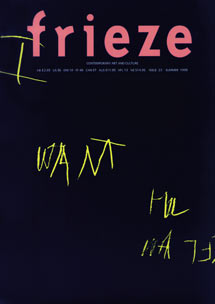 British Pop artist Allen Jones caused a bit of a stir in 1970. This was the year he exhibited a woman kneeling on all fours, her flat back supporting a glass table-top. The figure was cast in fibreglass, painted, made-up, fitted with a wig and dressed in leather boots, gloves and corset. The 'table' was accompanied by a chair and hatstand of equally kinky design. These 'furniture' sculptures were an immediate international sensation.

Commissions flooded in (Jones was originally asked by Kubrick to design the sets and costumes for the milk-bar scene in A Clockwork Orange) and the table ended up in the collection of Roman Polanski. However, Jones also encountered a storm of feminist protest. This recurred whenever his work was exhibited in the 70s, and continues to make him a cultural hot potato, even in these post-Madonna times.

One of the stars of the first generation of British Pop artists, Jones' early works were painted in the jolly, scrappy, semi-abstract style of the day. After living in New York for a year in the mid-60s, however, Jones came back with a high-keyed, hard-edged style as well as a new iconography: representations of women from popular culture and clandestine representations of the body from mail-order catalogues of fetish and transvestite wear. These fantasies of the body were explored in Jones' work during the rest of the 60s and 70s.

While Jones is known primarily as a painter, his graphic work is close to the heart of his project; printmaking proved especially appropriate for his exploration of fetishism because of its relation to his primary graphic sources. One highlight of this exhibition was the folio Shoe Box (1968), which consists of seven black and white lithographs, originally encased in a PVC-covered shoe box along with a shiny aluminium shoe last. Most of the prints depict a single shoe - usually the classic Jones motif of a foot squeezed into an impossibly tight stocking and stiletto.

Apologists for Jones have argued that his representations of women are merely a lure, drawing the viewer into an aesthetic game, or else they have pointed to the artist's interest in Jung and Nietzsche, arguing that his representations of the body are an attempt to reconcile the bisexual nature of the human psyche. Both arguments are disingenuous. Jones' project is not primarily a formalist one. Moreover, although he sometimes shows male and female bodies merging, and his female characters are often extremely 'masculine' (the images in Shoe Box, for example, often look like men's feet in drag), his work is concerned with sexual difference, not some mythical sexual homogeneity. Jones' subject is the female body as it exists in the male imagination.

Feminists recognised this instantly. In an article on Jones published in 1973, Laura Mulvey analysed his use of fetishism in classic Freudian terms. Women's bodies signify to men the possibility of castration: the fetishist is fixated by castration anxiety; hence, in his fantasies, the woman must be brought together with phallic substitutes (in an act of narcissistic completion) or punished for her lack of phallus (in an assertion of difference). Often these strategies coincide - the stiletto, for example, is both the wearer's weapon and punishment.

It is hard to deny the relevance of this account of fetishism to Jones' work. However, it is quite another thing to argue, as some did, that Jones' work should be suppressed. This brings us smack into debates on pornography and censorship: at what point should we restrict the circulation of images? It is certainly true that Jones' work seems tame now, but does this mean, as proponents of censorship seem to argue, that perversion is contagious? The wide response found by work like Jones' since the 70s suggests that, at some level, fetishism is a normative, rather than a pathological, phenomenon in our society.

In retrospect, the historical determinants of Jones' work emerge very strongly. In Life Class (1968), each work is made from two prints, executed in Jones' most luscious manner. The bottom half is a photo-lithographic reproduction of a pair of young woman's legs, skittishly posed in brightly coloured nylons and mini-skirt. This is the public face of Swinging London - keen to shock but fundamentally coy. The top half of each print completes the figure, but in a contrasting style. Most often it is executed in the harsh comic-book hand of American fetishistic graphics of the 40s - the secret face of British male desire in the gloomy post-war years. This kind of simultaneous quotation is one of Jones' favourite devices and by bringing together different visual languages he reveals the historical constructions behind each. The viewer is invited to shuffle the different halves of the works in the suite - to participate in, and become aware of, the cultural editing of the female body.

Jones reveals the operation of fetishism at a number of levels in our society. The demonstration of the workings of desire, rather than its gratification, becomes the object of the exercise. In an attempt to broaden my perspective on male desire I visited the exhibition in the company of my straight friend Simon. At the time of our visit, the gallery was holding a publicity shoot for the exhibition that involved a woman in Jones garb looking at the works on display. Simon was a bit distracted by the spectacle and seemed to spend most of the time ogling the cameraman's lens rather than the model. As Mulvey says, 'most male fantasy is a closed-loop dialogue with itself,' and the achievement of Allen Jones is 'to throw an unusually vivid spotlight on the contradiction between woman's fantasy presence and real absence from the male unconscious world.' Or as Simon says, 'he really brings out that vaguely terrifying something about women's bodies'.