Alternative Guide to the Universe

Marcel Storr was a deaf, illiterate Parisian street sweeper, abandoned by his parents at the age of three and raised by nuns, who for years believed that his city would be destroyed and that the President of the United States would need his obsessively elaborate, radiantly coloured architectural drawings, made in the 1960s and ’70s, in order to rebuild it. The psychoanalyst Françoise Cloarec has written that, for Storr, drawing was ‘an act of creation to build a dam against an unbridled inner deluge, to enable him to restore a ruinous imagination’. George Widener is a high-functioning autistic savant who automatically converts any number he sees into a date, and whose symmetrical, Pushwagner-style Megalopolis drawings, appended with palindromic calendrical number systems, are designed as peace offerings to the robots who will rule us after the Singularity occurs. James Carter is a fringe physicist who believes that everything is made up of ‘circlon’ particles, that gravity doesn’t exist and that the Earth doubles in size every 19 minutes. Alfred Jensen, a student of Hans Hofmann and friend of Mark Rothko, was esteemed in his lifetime for his chromatic, syncretic number paintings based on magic squares, touched off by a perceived parallelism between the Mayan number system and Goethe’s colour theory. ‘Alternative Guide to the Universe’ accommodates all of these (the total number of practitioners included, appropriately, is the conspiracy theorist’s favourite, 23), doing so through an impressively bold sleight.

‘Imagine that you could live in a different world. What would you want it to be like?’ asks Ralph Rugoff at the outset of his catalogue essay. Rugoff is a Trojan Horse-style curator whose exhibitions are outwardly sunny and hooky but frequently knotty on the inside, and one of his favoured exteriors – as those who’ve visited earlier Hayward summer shows like ‘Psycho Buildings’ (2008) and ‘Walking in My Mind’ (2009) will be aware – is the environment-transforming imagination. And so it is here, for all that the transformations are primarily speculative and inward. What links these diverse practitioners and the others, evidently, is that their vision of reality is not the consensual one, and the vested hope is that exposure to such off-beam ideation might encourage viewers to think outside of their own conventionalist boxes. 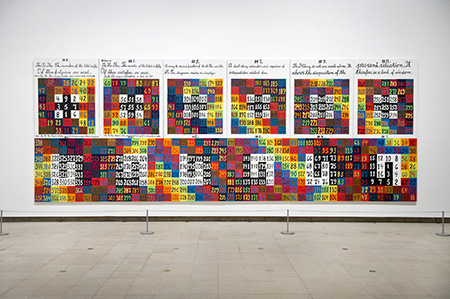 Here the makers are not boxed either. Instead it’s simply accepted that they are all differently wired – this, and wild world-creating prowess, being what connects them – but the organizers’ attention halts, mostly, at what they make, eliding the cause or other consequence of that wiring. Sadness goes to one side, though it glimmers there. That Emery Blagdon gave himself electric shocks, clasping bare wires and calling his apparatus a ‘Healing Machine’, or that Paul Laffoley was visited, on a sidewalk in Boston in 1988, by the alien Quazgaa Klaatu, is not unmentioned, but it’s not foregrounded either. In the show’s conceptual hierarchy, extra-terrestrial impetuses count for less than the autonomist aura emanating from Laffoley’s work itself, with its assured diagrammatic precision, popping colour and renegade cosmology spelled out in neat, controlled texts.

This, then, is ‘untagged’ curating, horizontal curating, prioritizing overarching schemas under which art and non-art can be organized and equalized. The process looks welcoming, inclusive and unquestionably spotlights some extraordinary, hard-driving visual culture. ‘Alternative Guide to the Universe’, of course, is not unique in espousing this approach. It characterizes Massimiliano Gioni’s Venice Biennale, ‘The Encyclopedic Palace’ (which shares Morton Bartlett, Eugene Von Bruenchenhein, Guo Fengyi and Achilles G. Rizzoli with the Hayward’s list), curatorial projects such as the Hamburger Bahnhof’s recent ‘Secret Universe’ strand (which has also featured Bartlett, Laffoley and Widener, and to which this show seemingly owes a specific debt) and, more generally, James Brett’s Museum of Everything, which has organized a pop-up exhibition in the Hayward’s project space. Beyond this, we might say there’s a timely attention to distributive networks here: if, as has lately been argued, the function of art now is to reflect the apparatus it travels through, then the curating here certainly operates in that area – in the Hayward, diverse practices are effectively retagged as art, whatever their makers think or thought they were.

In Venice, Rizzoli’s creations took my breath away while I thought nothing of categories, and the same is true of this rather larger selection of his work, baroquely drafted architectural constructions that serve as monumental portraits of people and evocations of experiences, in which inchoate yet evidently hugely powerful feelings are given form. Mother Symbolically Recaptured / The Kathedral (1937) is parent-as-church, fringed by texts in a riot of fonts – though riot seems the wrong word for the work’s feats of control and psychological overmastering. Another, very phallic, church architecture records the day when, aged 40, Rizzoli accidentally saw female genitals for the first time, evidently rushing to his drafting table to deal with the trauma. Meanwhile, for both (the relatively well-known) Bodys Isek Kingelez, maker of fantastical architectures from packaging materials and tin cans, and William Scott, architect (on paper) of a smiley, redeveloped San Francisco named ‘Praise Frisco’, world-building is brightly Utopian. Scott’s back-story feels a bit fudged: the catalogue says he’s associated with Creative Growth – an Oakland community centre for artists with mental, physical and developmental disabilities – though not in what capacity. One might think about how different this is, in idealist spirit, from the work of, say, Theaster Gates. Obviously Gates gets to build things.

One starts to sense that the show is proposing yearning as a transcendent category. ‘The conventional approach to discussing what goes by the name of “outsider art” involves a preoccupation with the biography of the artist, sometimes at the expense of the work,’ writes the American novelist Rick Moody in the catalogue. It’s in generalized terms, then, that one is to deal with cryptograms that turn purely visual because there’s no way we can parse them: Melvin Way’s crammed drawings, say, where the teeming mass of equations and looping lines that is Universal Balm (1989) leaves us skimming bristling surfaces, fascinated but apprehensive about aestheticizing the maker’s schizophrenia and using it as a springboard to our own free imagining. What should bridge the gap between focusing on these makers’ back-stories – which might make one think more of creativity as desperate dam-building than anything else – and ignoring them, here, is the idea that something drives the desire for things to be better, to be different. We can all relate to that, the show avers; if the viewer agrees, it’s unlikely to be with total equanimity. 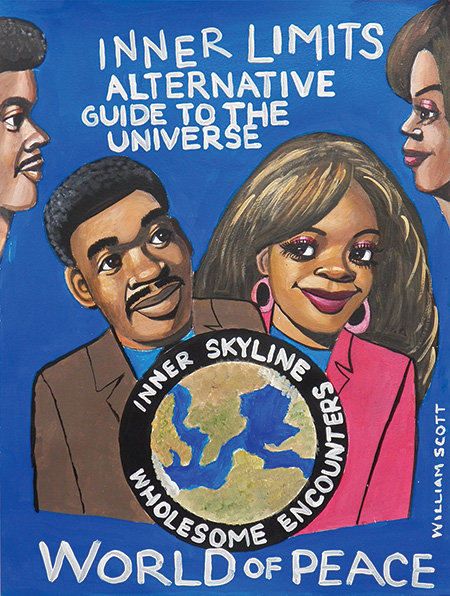 One other thing the show says, by its gender imbalance – 21 men, two women – is that men yearn for things to be otherwise more than women do. (Rugoff, interviewed by the Guardian, said he was disappointed by the count, as if it was someone else’s business.) When the proto-Cindy Sherman Lee Godie appears, upstairs, in her photographs, hogging a Chicago photo booth while dressed in transformative guises, she’s also flanked by Bartlett’s doll photographs, with all their attendant male sexual anxieties, and Von Bruenchenhein’s (admittedly marvellously off) photographs of his willingly objectified wife, Marie. In the latter, as with some of Rizzoli’s works, a major chord resounds: the maker is happy, lovingly so, with some aspect of the world – some person – that already exists. For all that longing is its chief register, ‘Alternative Guide to the Universe’ is a twisting, changeable thing: a wrong-footing, uneasy journey.

What does it signify, though, that a show using these materials is being presented now? In 1996–97, the Hayward’s ‘Beyond Reason: Art and Psychosis: Works from the Prinzhorn Collection’ classified the psychoanalyst’s collection of works by psychiatric patients firmly as outsider art. Today, that boundary has been actively collapsed. Part of the reason, one would say, is the art world (and market) never seeing a territory whose energies it doesn’t eventually regard jealously; part of it is the dissolution of discrete cultural spheres generally; but part of it too, surely, is the raw idealism and future-thinking that powers a good deal of the work here. Obviously there are exceptions, but it can be hazarded that contemporary artists are no longer comfortable with trying to shape the future, or being hopeful in general, and have settled in the main for reflecting and magnifying the difficult present. And if this has left a void, it turns out that there are makers putatively able to fill it whose work looks, if you squint, like art; sometimes, indeed, better than most art. And lo, with a mighty gulp, the art world swallowed them too. 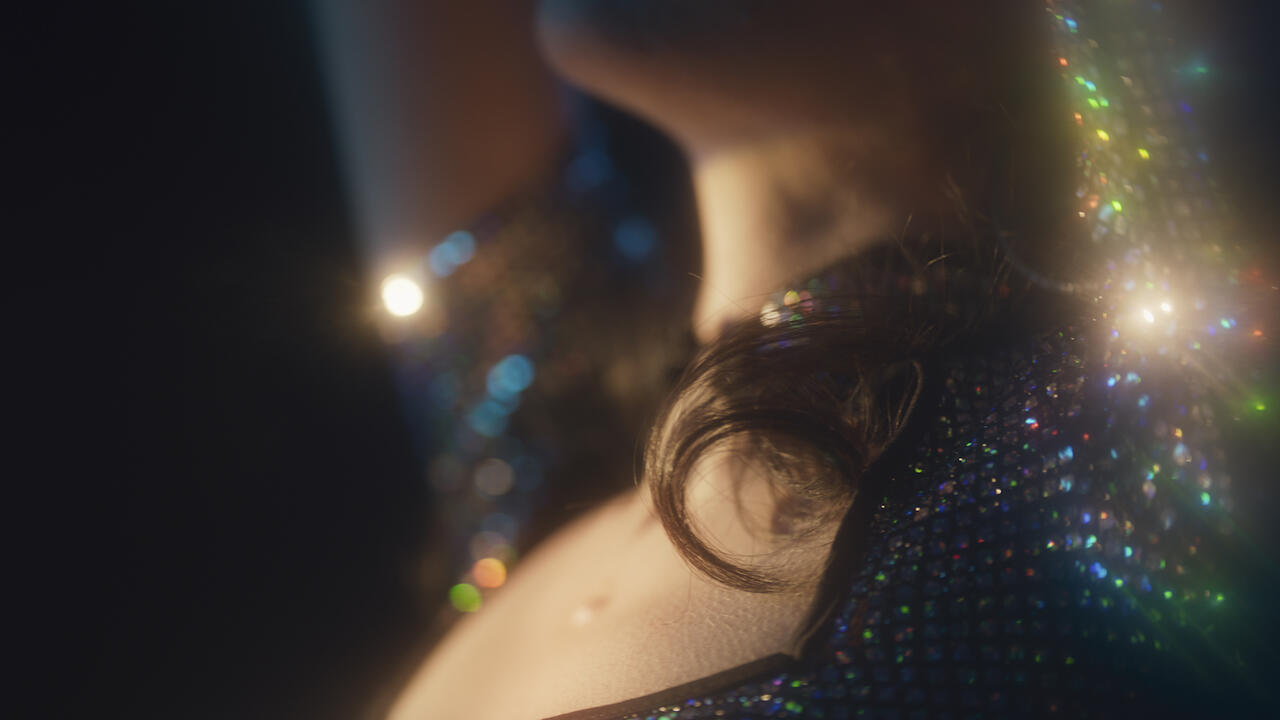