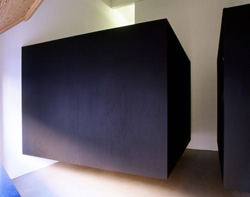 Andreas Fogarasi’s four-part, single-channel video installation Kultur und Freizeit (Culture and Leisure, 2006) opens with the desolate terrain of Periphery, the first film in the series. The camera scans an outlying urban district replete with the mix of corporate buildings, shopping centres and fast food drive-ins that now constitutes something of a standard in the western world. People tramp through the winter cold past box-shaped architecture and signs boasting ‘24/7’ opening hours. Suddenly, images of colourful lanterns and costumes bring us into a more cheerful atmosphere. The setting for a children’s party interrupts and counteracts the anonymous commercial locale in which individual expression is only permitted at the level of consumer choice.

The audience’s experience of Kultur und Freizeit is very precisely dictated: projecting out from the gallery wall is a large, black cube housing a bench and a wooden viewing funnel; once seated inside this peepshow-like milieu, the viewer’s position and gaze are fixed. This elegant construction feels like a scaled-down version of the many theatrical arenas featured in Fogarasi’s film. The children’s party scene, for instance, takes us into one of Budapest’s many cultural centres. The Hungarian capital has a large, decentralized network of these state institutions, which were built from the 1950s onwards as successors to the workers’ clubs of the 19th century. In Kultur und Freizeit, Fogarasi, who was born in Vienna to Hungarian parents, depicts several of these cultural centres dating from different periods. His perspective is essentially a sympathetic one, for although these institutions served as arenas in which workers could be politically influenced, they also provided scope for counterculture and, in isolated cases, even became hotspots for the artistic avant-garde. As in previous exhibitions, Fogarasi addresses culture’s position at the interface between the economy and the state. Who, he posits, creates publics and how? Which hidden ideologies go hand in hand with acculturation? And to what extent does the art world function as part of the entertainment industry?

Fogarasi’s video is impressive for its meticulous montage of image, sound and text. While the camera pans slowly over buildings and architectural details, other motifs are alluded to via snippets of conversations, music or intertitles: at one point, a woman’s voice tells of a film screening that was banned by the authorities and of the attempts made to protest against this censorship. While Periphery addresses the current form of the cultural centre in the sprawling urban hinterland, the second part, A Machine For, presents a single-storey structure from 1973 that still shows traces of modernist ambitions in its construction. The features of this building-cum-culture machine include an auditorium whose seating and roof can be moved at the press of a button. Pictures of the retractable roof in action are followed by the intertitle ‘while being under permanent observation’.

The third film, Worker’s Club, takes us into a building erected in 1906 by the printers’ union. Again we see a theatre, this time with art nouveau décor. The kinds of changes undergone by the once-autonomous workers’ club in times of really-existing socialism are merely hinted at: a short blast of punk music alludes to the subculture that was occasionally able to cut out a niche for itself in these cultural centres. In contrast to this, the film’s fourth and final part, Workers Leave Cultural Centre, tells a story of decay. Metal statues of worker heroes still occupy pride of place on the building’s façade, but they can’t find paid employ in the city anymore. Kultur und Freizeit culminates with a list of Hollywood movie titles dating from the time of filming: in competition with the cineplex, Fogarasi seems to be saying, the cultural centre – a relic from another era, languishing between abandoned factories and new business parks – is bound to draw the short straw.

The historically-oriented, composite make up of Kultur und Freizeit recalls Allan Sekula’s Fish Story (1989–95), a study of the imaginary and material geographies of the capitalist world. Fogarasi, however, also turns a critical eye on the status of the viewer, which is not among Sekula’s concerns. The videos are strewn with self-reflexive elements – such as an intertitle begging the question: ‘What is my interest in this?’ – and suggestions for non-art venues where the work could be shown (squats, conference centres, etc.). Anti-illusionistic effects such as reverse playback and slow motion are used to subvert any documentary claim to truth.

Fogarasi has written texts for the Viennese urban studies magazine dérive on gentrification and the branding of places. His study of cultural publics and their architecture in Hungary has an undertone of institutional critique: he identifies space not as a homogenous structure but as a social process and a political issue, developing and overlapping different notions of space ranging from historico-political power blocs through to the digital manipulability of film. With his minimalist sculpture-as-viewing-cube, meanwhile, Fogarasi refers to the beginnings of site-awareness in the art of the 1960s. But the dominant black architectural viewing cube, which highlights the position of the viewer so clearly, is more than this: it is the indication that Fogarasi’s art has the capacity to avoid falling into the trap so common to documentary filmmaking, of excluding one’s own role in the depiction of what is seen.