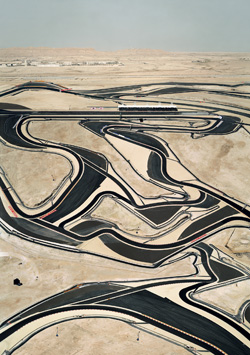 It was almost as if, 70 years after its inauguration, the museum's ghosts wanted to signal their presence: two hours before the opening of Andreas Gursky’s show at Munich’s Haus der Kunst, the lights went out. A power cut; cables burnt out in the basement. In the endless corridors of the building, constructed to Hitler’s orders by Paul Ludwig Troost in 1937 and seemingly designed more with military parades in mind than displays of art, the steel fire shutters rattled down, as if no one should be allowed in, or out. The incident weirdly echoed the spooky atmosphere created by the architectural stripping of the museum’s main halls to allow for the installation of Gursky’s large-scale photographic works. For the first time since they were fitted, the lighting units and other fixtures were removed: with their marble portals, limestone cladding and massive coffered roofs, the halls looked as imposing as they must have done when, under Hitler's reign, they hosted
the seven-metre-high sculptures of Nazi artist Josef Thorak.

But it would be wrong to believe that these spaces – cleared, according to the museum's director Chris Dercon, in the name of ‘critical reconstruction’ – offer an appropriate setting for Gursky’s vast scenes; works that have often been criticized as being overly monumental. For even these prints, many of which measure two by three metres, are still no match for the gigantic main hall restored to its former glory. Nevertheless they sufficiently fill the smaller side galleries, where the overall atmosphere is one of tidy emptiness: like an abandoned power station waiting to be officially repurposed.

Gursky’s digitally manipulated images of Kuwaitis dressed in traditional white thab and ghutrah at a stock exchange (Kuwait Stock Exchange, 2007), an empty Prada shelf (Prada II, 1997), Formula 1 pit stops (F1 Boxenstopp I, 2007) or a Madonna concert (Madonna I, 2001) cannot be reduced to documents of an ideological worldview that seeks to attest how small and ultimately insignificant humans are, and how cute their busy activity seems when viewed from a strategic vantage point high above or far away. However, it can be hard to avoid this impression when looking at a beach in Rimini replete with myriad colourful parasols (Rimini, 2003) next to an image portraying endless rows of cattle stalls extending towards the horizon (Fukuyama, 2004). Gursky’s photographs possess an Old Masterly greatness; not for nothing has his work prompted many critics to re-appropriate Heinrich von Kleist’s description of Caspar David Friedrich’s paintings as inducing a feeling of having had one’s eyelids cut away. But their most disconcerting quality is the way they blur the distinctions between macrocosm and microcosm, so that next to a sublime landscape taken in Niagara Falls (Niagara Falls, 1989), he will place an image of plastic floor panels (Düsselstrand, 1997) or a piece of stony ground (Untitled III, 1996).

Moreover, when he photographs islands near Phuket (James Bond Island I-III, 2007), an under-ground neutrino detector in Japan (Kamiokande, 2007) or mass marches in North Korea (Pyong-yang I, 2007), often involving considerable logistical and diplomatic effort, Gursky is not just a vanguard of the tourism industry. He is something like a cold, impassionate documenter of globalisation – of its flows of data and people, architecture and mass spectacle – with the (perhaps unachievable) aim of facilitating something like a collective, consensus-based worldwide view of all these phenomena. And what could be further removed from the ideology of the Nazis, based as it was on the exclusion of all other visions of life?

The 46 pictures included in this retrospective have been reprinted for the show. Even Gursky’s smaller early works have been blown up to a more awe-inspiring size, giving them new character. As a result, Gursky’s artistic development is no longer identifiable at first glance: looking at the newly-made exhibition prints, his oeuvre is stripped of patina and historicity. The pictures appear as fresh as the day they were taken. Gursky’s symbolism, his search for timeless images of contemporary global busy-ness, is itself not allowed to age: the pictures convey an everlasting present.