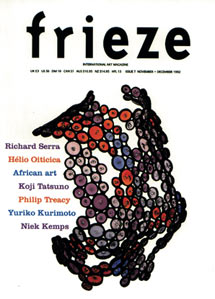 Once upon a time, Andreas Gursky took pho-tographs which were the most boring, the most piercingly uninteresting, I'd ever seen. Which was great Now, however, they seem to be bursting with character. Almost exciting to look at and yet, at the same time, incredibly vulnerable. Which is unusual. The style itself is by now familiar. Large format, framed photographs which have become more fun to be with as time goes by. Just seeing how inter-esting the work is now, (no longer just a case of bad acid on the continent), makes me think how beautiful they've become. Albertville is just such a picture. Taken at the 1992 Winter Olympics, it is a potentially disastrous image which starts out as a snapshot, but ends up as a Bruegel. A ski-lift takes the skiers up, so they may ski down - passing a small group of huddled photographers on the way - so they can go to the top again. A strange existence, punctuated by the ant-like activity of the onlookers, it is a perfectly cynical observation. The depth of field holding out a world which is far, far away.

Gursky appears to be the passer-by in his images. Like the man from Mars, or Kraftwerk on holiday, there is certainly something bugging him about us humans. And having been briefed not to commune, Gursky the Alien proves to be shy and retiring. Avoiding close contact at all times. Which worries me slightly, as does his tendency to reduce people to insignificant little specks in the landscape, something which has been becoming increasingly sinister. The people in Cairo I, (the first of two dipty-chs), are precisely that. The ariel viewpoint, though suitably rational, is an unusual departure for Gursky. As is the time a based nature of the work - two views of a congested roundabout separated by a five minute interval. Gursky is not known for his reckless behaviour, but to get this picture he has clearly had to dangle from a top floor window. The people down below scuttle around, boarding buses, forming con-gregations, but not one of them has stopped to shout up to him 'don't jump!'. Maybe he's invisible as well. The resulting image is strangely dream-like. Astral. And within Gursky's often stifling objectivity, it verges on becoming sensational. The ensuing game of 'spot the difference', between the buses, cars, and people, actually becomes... interesting?

The photograph of Charles de Gaulle (airport) is solid ground for Gursky. A transparent interior where people curiously admire their surroundings as they travel through plastic tubes and glass corridors. Like an enormous hamster-city, the scene is meaning-lessly spectacularised by a dumb water fountain. Again it is suggestive of a creeping contempt for such mundane activity. Schiesser, (diptych 2), oper-ates equally enthusiastically. The title is a place name, the scene; a factory interior. Not new for Gursky, as the modern manufacturing plant appears to be the birth place of his nuclear banality. As with Jeff Wall's Outburst and Thomas Struth's pho-tographs of Jaan, the electrical intervention is phe-nomenal. A ceiling alive with wires and cables. Pattern cutting implements coil down towards neatly placed wads of material. Both the perspective, and the framing, remind me of Leonardo Da Vinci's 'Last Supper’. Except here they make sportswear.

But as a diptych, Schiesser seems slightly unsure of itself. Maybe the way in which Gursky stands apart from the world explains why the two pieces appear to be so detached from themselves. Just why they can't occur in the same frame, or independently, or why Cairo I is about totally different concerns - though it actually works as a diptych - or why the success of Albertville is not repeated in Charles de Gaulle, remains largely unknown. Obviously the work is not as impenetrable as it once was. Although Gursky's impact has suffered from its own success, it is by no means over. What is noticeable about the recent work, however, is the differences between them. Concerns such as the interior, landscape, time-based and figurative, seem to be shared out amongst them almost sporadically. But then again, it was only a few years ago that to talk about the indi-vidual characteristics of Gursky's work, as if there were a 'character’ to mention, would have been like admitting to an affair with a baked potato.