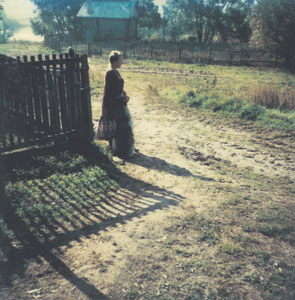 The Russian filmmaker Andrei Tarkovsky was given a Polaroid camera by Michelangelo Antonioni in the 1970s. It may not seem obvious that the Russian, with his love of long, long takes and epic slowness, would have been attracted to the semi-instant form of the Polaroid – but he was. As well as using it for intimate snapshots of family life, he also employed the camera as a working tool for films-in-progress, off and on set (he sometimes carried it around his neck while filming). This exhibition at the White Space Gallery – collecting a series of many previously unseen pictures taken in Russia and Italy between 1979 and 1984, enlarging on the selection in the book Instant Light (2004) – revealed a surprising affinity for the Polaroid that bordered at times on reverence.

‘Bright, Bright Day’ took its title from a poem by Tarkovsky’s father, Arseniy. It was also the title for the screenplay of the director’s most self-avowedly autobiographical film, Mirror (1974). With the encouragement of a sequence of photos from Tarkovsky’s childhood leading up the staircase to the gallery, it was hard not to see the Polaroids as a diary of what was to be one of the last acts of his life, before his death from cancer in 1986, at the age of 54. In the first Polaroid in the show, a self-portrait from 1983, the filmmaker sits deep in a room surrounded by darkness, facing two tall rectangles of bluish light in a wardrobe mirror, holding a tiny black cube (the camera) in front of his chest. Brighter, transfigurative light catches one side of his face, seeming almost to come from within: perhaps an answer to an awkward prayer.

All photographs tend to suggest fragments of narratives, and the photographs of a filmmaker offer more narratives than most. The Polaroids show scenes from a life that, by this stage, was all about the making of a film. During this period that film was mainly Nostalgia (1983), an achingly lugubrious, not entirely successful story about a Russian poet researching in Italy, tormented by melancholic longing for his home. Like his central character, Tarkovsky was, of course, also in Italy location-hunting with the scriptwriter Tonino Guerra and filming, in reluctant exile from Russia. Guerra features largely in the Polaroids, as do the typewriters on which the film script was written. The exhibition hinted, slightly too meekly, at this interplay, including sequences from the films alongside the Polaroids.
The portraits in the series are disarmingly personal, as though taken straight from the family photograph album. Yet they are also incredibly poised and composed. In keeping with the theme of exile and longing for home in Nostalgia, the Polaroids from Italy and Russia form a strangely coherent series: geographically disparate, but from the same mental space. Tarkovsky’s wife, Larissa, sits on a bed with their son Andrei in Moscow; their son stands with a dog by the door of their holiday home in Myasnoe, also in Russia. The figures recur. Here is Larissa again, now in San Gregorio; or young Andrei again, in a park. These are memory landscapes, snapshots that instantly seem like evanescent dreams or thoughts.

Other Polaroids are emptier. Patches of light on a bed fall in soft mosaics of colour. A cat yawns in a strip of sunlight. Trees, misty valleys, a boat tied to the shore. A vase of flowers on a balcony, transcendentally luminous – and everywhere, an intricate, delicate lattice of light and shadow. Like William Eggleston, Tarkovsky has an instinct for colour that is astonishing, extraterrestrial. But where Eggleston’s colours often surprise through brash contrasts, the palette here is muted, constant: a raw, pale radiance set off by zones of darkness and shadow. The sky is always kept in check, carefully framed – often hinted at, rather than seen, by doors or windows.

As the photographer Stephen Gill notes in the book accompanying the exhibition, in some of these pictures the subjects examine or hold exposed Polaroids in their hands. It’s a tiny, crucial touch that reinforces the artificiality of this series, balanced between art and life. The pleasures of the Polaroids reside in similar small details. Tarkovsky’s great subject was the magic of faith, and the slowness of his films is a quality of perception: a devotion to seeing, to nature. The Polaroids encourage looking with the same intensity. Yet stripped from the director’s austere control of the flow of time, their echoes are easy to miss. In One Day in the Life of Andrei Arsenevich (2000) Chris Marker compares Tarkovsky’s work as a whole to an imaginary house whose rooms all open out onto each other. This quiet, unassuming exhibition opened another welcome set of doors to this house – a house that, like the room inside the Zone in Tarkovsky’s Stalker (1979), might, just might, offer views into the infinite.