[member:membership-name]
[member:full-name]
VIEW MY DASHBOARD
BY Martin Pesch, translated by Imke Werner in Reviews | 05 MAY 00

M
BY Martin Pesch, translated by Imke Werner in Reviews | 05 MAY 00 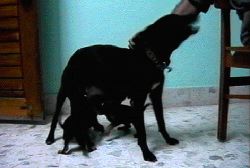 I have rarely seen a stranger scene. A man, of whom you can only see the upper part of his body, is sitting at a table with friends, who can only be heard, but not seen. A dog is standing next to the man, suckling two puppies. With one hand the man grabs her, strokes her head and then firmly takes hold of her collar. At the same time you can hear him indistinctly saying things like 'Aaah, come here'. The scene lasts for 30 seconds; Anna Jermolaewa looped it to create her video Motherhood (all work 1999).

But what is actually so strange about this scene? First, it is odd that this seemingly trivial moment is being shown at all. But watching it, you gradually realise that there is something beyond the apparently accidental way it was shot. Early impressions, fostered not least by the title Motherhood (an uncommon expression in German these days), are of care, sympathy and tenderness, set within the framework of social interaction. But the bitch does not pay attention to her puppies, and while they greedily suck her teats she stretches across to the man. Perhaps she cannot look after her puppies because the man is pulling her towards him by her collar. However, as what is going on is unclear, the scene generates a mood of subtle violence.

In their book Arts of Impoverishment, Beckett, Rothko, Resnais (1993) Leo Bersani and Ulysse Dutoit observe: 'The characters of Waiting for Godot are sacrificed to the representation of their waiting'. The images in Jermolaewa's videos are representations of inescapable hopelessness. Whereas in Beckett's plays the 'panic' of endless waiting is sublimated into dialogues which appear like set phrases, the detached observation of Jermolaewa's video lends the banal scene a dramatic quality.

In her video Solo, a little pink toy rabbit moves towards a camera that is lying on the floor. He stops when his toy body rubs up against the lens. A simple melody accompanies this scene. After a couple of minutes, the loop starts again. In the conventional sense of the word, a solo makes someone the focus of audience concentration. Jermolaewa's Solo reduces this idea to an absurdity - the mechanical movements of the toy rabbit and the distance between it and the camera make a solo impossible. Only when the synthetic fur of the rabbit rubs against the lens does one suddenly get an impression of his individuality, and the drama of this mechanical creature becomes evident. Since the rabbit is a toy, the sequence develops into a metaphor for the regimented disciplining of children. With the belly of the toy rabbit rubbing against the camera, one might also associate the scene with sexual abuse; as the spectator, one becomes a voyeur of an incident, which is not meant to be seen.

In the 15 second loop of On/Off - in which an erect penis turns a light-switch on and off - voyeurism is transformed into a kind of twisted humour. It continues endlessly. On, off, on, off, but ultimately it translates as nothing more than the old in/out.