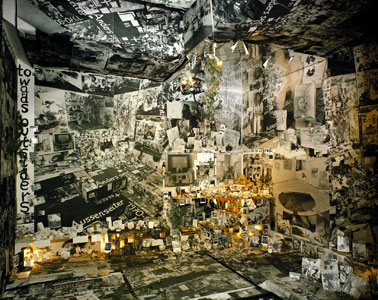 Throughout her career Anna Oppermann, who died in 1993 at the age of 53, faced considerable criticism. Standing in front of the thousands of paper scraps, notes and photographs that make up her self-styled ‘Ensembles’, it’s not hard to see why. At first they appear to be intimate archives exposed to public scrutiny, and it soon becomes apparent that a detailed examination would require a magnifying glass and endless amounts of time. Any attempt to gain a clear overview of the works is bound to fail, as the Ensembles consist to a large extent of drawings and photographs of yet other Ensembles. This kaleidoscopic fragmentation creates a bewildering repetition that leaves the eye hankering for more despite the abundance on offer – a frustration overcome only by abandoning the desire to comprehend the works in their entirety.

Explaining the origins of her method, the artist stated that she once assembled all of the sketches and preliminary stages for a painting into a ‘still life’. So in the late 1960s, as the term ‘environment’ was being replaced by ‘installation’, Oppermann coined the expression ‘Ensemble’ to underline the specificity of her method. In one piece of her writing she distinguishes between meditation, catharsis, reflection and analysis as phases of dealing with a ‘problem’ that her working practice is concerned with – steps that recall Sigmund Freud’s model of ‘working through’. In place of a psychoanalytical interpretation, however, Oppermann, who studied philosophy at university, took recourse to a wider range of theoretical sources, which she integrated into her work in the form of quotations from Theodor Adorno, Umberto Eco, Peter Sloterdijk and others.

Of the 60 Ensembles Oppermann exhibited in her lifetime, at venues including documenta 6 and the 39th Venice Biennale, the Generali Foundation presented seven key works. Each Ensemble focuses on one thematic complex, such as the connection between religion and sexuality, or between being an artist and being – in a more general sense – an outsider. According to Ute Vorkoeper, Oppermann’s executor and guest curator of the show, the works on display are ‘revivals’ of the originals, since any attempt at exact reconstruction would be ‘a nightmare’. The juxtaposition of Oppermann’s first and last Ensembles is especially revelatory. Mirror Ensemble, begun in 1968, took shape over a period of 20 years. Mirrors were key to the artist’s later practice as they enabled her to fragment and manipulate space. In the innumerable drawings that form part of the work one recurring motif is a mirror reflecting a window showing a patch of blue sky. This oblique vision functions as a manifestation of narcissism and isolation. Oppermann’s last Ensemble, Paradoxical Intentions (To Lie the Blue Down from the Sky) (1988–92), features real mirrors: over time, in Oppermann’s oeuvre, they have evolved from symbols of introspection to instruments of illusion and projection.
Oppermann’s arrangements are often displayed on low, altar-like podiums. Large-format elements are included in the form of canvases printed with photographs and then painted over. In fact, such an approach is apposite for an artist who repeatedly questioned her working method, as in Being an Artist – On the Method (Drawing in Ensembles, Dilemma of Communication, The Economic Aspect) (1978–85). Individual themes are frequently borrowed from one work and developed elsewhere. The especially dense installation Being Different (‘Somehow she’s so different…’) (1970–86), for example, includes motifs that recur later: conformity, gender, aggression and the misconceptions Oppermann perceived others had about her practice. Personal existential dilemmas blend seamlessly in her art with social issues. However, to accuse Oppermann of a solipsistic kind of ‘subjectivism’ is about as valid as criticizing Thomas Hirschhorn’s installations addressing all sorts of political issues for their ‘objectivism’. Her artistic process is radically subjective in the sense that it opposes a linear notion of rationality, and of the art work as an easily consumed product.

With their 1970s’ terminology many of the quotations used by Oppermann appear slightly dated. Much can still be gained today, though, from her Ensemble Gesture of Pathos MLCODP – Make Large, Compelling Objects that Demonstrate Power! (1984–92), which addresses the commercialization of art in the 1980s with great irony. At its centre stands a blurred, larger-than-life photograph of a person shaking a fist. Oppermann’s critique here is directed against the bathos of Neo-Expressionist painting and hollow gestures in culture and politics. But the artist does not exempt herself from criticism; the work also includes texts discussing her own potential for violence and her desire for success. To Oppermann the easy solution of simply washing one’s hands of all guilt was admirably alien.