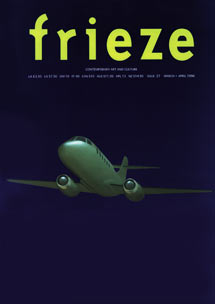 Before the opening of the 1937 International Exhibition in Paris, Fernand Léger made some audacious proposals to transform the city. 'Imagine Paris all white' he declared, 'that is to say all the facades scraped and cleaned, employing all the unemployed to do this work'. Another of his ideas was to paint the city in primary colours, cover it with lights and cinematic projections and camouflage the Eiffel Tower ­ built for the world fair of 1889 and presumably too old to operate as a symbol for the New France. Léger's proposals were never realised, but their totalising vision and desire both to appropriate and erase the past, stand as testament to the spirit of 1937.

'Art and Power' ­ the title makes me shiver ­ is an exhibition organised under the aegis of the Council of Europe, and documents many gestures of a sublimity comparable to Léger's. Some of them were realised, like Mussolini's via dell'Impero in Rome, which cut a swathe through the ancient city. Others, like the massive architectural drawings displayed in Moscow shop windows, were always going to exist primarily in the imagination. Starting with Paris, before turning to sections devoted to art in Rome, Moscow and Berlin between 1930 and 1945, 'Art and Power' suggested that the characteristic form of this period was a reinvention of the city space. By opening with the World Fair, and the celebrated pavilion of the Spanish Republican government, the organisers intimated that the cultural hubris of this period cannot simply be identified with totalitarianism.

It's good that these points were made, but there were still serious problems with this exhibition. It needed less fine art and greater representation of the mass media if it was ever going to properly address the issue of public spectacle, and to do this would have needed a much less busy and more imaginative installation. More seriously, the exhibition went badly wrong towards the end. In many respects 'Art and Power' told a more complex story than the standard post-war narrative of good art by the good guys and bad art by the bad guys. Drawing on recent scholarship, it demonstrated, for instance, the points at which totalitarianism found a use for the avant-garde. However, it's the Nazi part of the story that has remained the most problematic, and at which point the exhibition flunked. The closing German section of 'Art and Power' contained only a small, mainly uninteresting selection of Nazi 'fine' art, followed by a showcase of 'degenerate' art and Holocaust images. Any chance of complexity was lost, and I left the exhibition feeling brow-beaten rather than having made up my own mind about fascist art.

For example, the exhibition contained a photo of the bedroom of an apartment built for one of Mussolini's more notorious deputies, Ettore Muti, inside an ancient gate in the Aurelian Walls. Beneath this image of all white drapes, polar bear throw-rugs and exposed brick walls hung with ornamental weapons, the caption said that the apartment was 'designed to combine a pseudo-archaeological approach to antiquity with the nouveau riche taste of a womanising lout with too much power'. I love this caption ­ it radiates disapproval, activating rather than dampening my desire for what the image might contain. And what might it contain? The combination of image and caption stirs up issues which the exhibition otherwise avoids ­ the continuing seductiveness of totalitarian spectacle, with its kitsch approach to history and aesthetics, and its manipulation of sexual fantasies of domination and submission.

And of course the exhibition really contained only one picture: Heinrich Knirr's portrait of Hitler, gazing with unfocused eyes over a Romantic vista. This is the Hitler of my childhood, the Führer whose portrait my primary school teacher put up in our classroom. I remember coming in one morning to find the teacher having an argument with one of the cleaners, who said 'children shouldn't have to know about things like that'. This is also the Hitler of Dalí, who fantasised about the Führer's 'plump edibility', about the movement of the soft flesh of his back packed tightly into his uniform. This fascination with Hitler nearly got Dalí thrown out of the Surrealist movement in 1934, during its temporary embrace of political correctness. But Dalí's desublimated fantasies of power (he envisaged a Hitler with 'four balls and six foreskins') are inimical to the myths of Fascism ­ as the artist pointed out, 'all the novelty resides in the truculent disorientation of these myths'. This, surely, is the issue worth fighting for. The totalitarian image may posit an infantilised viewer (are you gonna be the one that saves me?) but so too does censorship.

One of the works I liked best was a doodle by Willi Baumeister, executed over a reproduction of a neoclassical relief by Arno Breker, one of Hitler's favourite sculptors. The relief shows a musclebound warrior grappling with a snake, but Baumeister has simply drawn a diminutive bow-tied geek over it, whose nose is the avenger's dick. The intervention is deceptively complex, avoiding the dichotomies which have dominated our understanding of this period. The piece manages, for instance, to satirise the ideas implicit in the Nazi cult of the body while still admitting the homoerotic power of the original image (no one did homoeroticism better than the Nazis). For this reason, the image manages to implicate me, yet without inviting me to flagellate myself.

In the end, however, it seems that there is still too much ideological investment in the interpretation of this period to allow for a more open debate. The Red Arrows flew down the Mall on V.E. Day this year, the crowd cheered to see the Royals come out on the balcony and it was all taken as a symbol of national affirmation and of coming to terms with the War.