The second Art Sheffield festival opens this February; its themes of exhaustion and overwork a poignant reflection of the city’s character 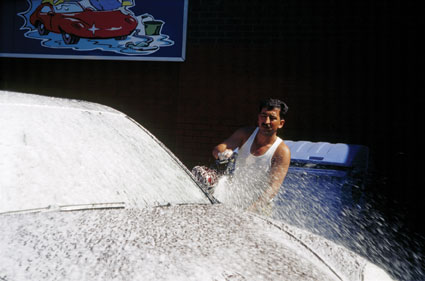 Before a song by Pulp gave the city its ironic nickname ‘Sheffield: Sex City’ and it developed its current misplaced glamour, my main experience of Sheffield was visiting it countless times as a kid in the early 1980s, during school summer holidays. The blackened, derelict sidings and factories I passed travelling north out of the railway station stick in my memory, yet it’s always struck me that there’s an exceptional warmth and intelligence attached to this part of South Yorkshire. For me, at least, this is why Art Sheffield 08 looks so exciting, together with the welcome absence of over-extended aspirations that other events of this kind often boast of.

The festival will take place in February and March in a number of venues across the city, ranging from artist-run spaces to municipal galleries including S1 Artspace, Bloc, End Gallery, Site Gallery, Millennium Galleries, Yorkshire ArtSpace and Sylvester Space. It is the second in a series of large-scale events co-ordinated by the Sheffield Contemporary Art Forum (SCAF). Art Sheffield 08 is being curated by Jan Verwoert, whose contextual essay for the event, entitled ‘I Can, I Can’t, Who Cares’, provides the main basis for the work selected for the exhibition.1

For the exhibition’s inaugural manifestation Art Sheffield 05 (subtitled ‘Spectator T’) the curator, Gavin Wade, invented a scenario whereby artists could submit proposals in response to his writing around a fictional character called Tony T – a character who actually hates art. In an equally perverse curatorial conceit Verwoert’s scenario for Art Sheffield 08 (subtitled ‘Yes, No and Other Options’) is based on the theme of the city as a location for our collective expression of complete exhaustion and total burn-out.

To be honest, I can’t think of a theme more appropriate, not only for Sheffield but also for a number of other small towns and cities in the UK. Unlike Manchester or Liverpool – places with an extremely strong sense of identity – Sheffield has never fully capitalized on its post-industrial character, and it’s evident that there is little desire to sell the city on this level. If the brash swagger of Manchester and Liverpool is absent in Sheffield, then perhaps the character of its recent cultural heritage provides an answer: a mixture of self-deprecation and stoicism, which is present in the town’s musical history. Obvious examples include bands such as Pulp and Arctic Monkeys, who have gradually taken the city’s unaffected and down-to-earth character to a high level of self-consciousness, thereby injecting into Sheffield a sense of mystique not seen since the early 1980s, when Cabaret Voltaire and the Human League were making music inspired by the sounds of the local factories and steelworks.

This is where the theme of Art Sheffield 08 comes in. A new biennial seems to spring up almost every month, and a rampant market – itself a by-product of art’s expanding importance within the cultural sphere – makes ever-increasing demands on artists, writers and curators. If we’re all burn-out freaks who can’t let ourselves stop caring about work, as Verwoert purports, then it may be important to ask whether this is all actually doing us any good: ‘Anyone working under the conditions of just-in-time production by definition thereby labours and lives in a constant state of exhaustion.’2 He suggests that we no longer simply ‘work’ in contemporary capitalism but also compulsively ‘perform’ our labours, sometimes in a self-conscious manner: we are aware of ourselves acting out a ‘normative protocol’ in capitalist service industries and respond in different ways.

Verwoert argues that we should attempt to find deliberately unproductive scenarios outside the regulated spheres of work or cultural production. In this sense the inclusion of Nasrin Tabatabai – one of the artists confirmed for the festival – is poignant. Her documentary Passage (2005) concerns a refugee in the Netherlands who distributes a free newspaper in a supermarket foyer, talks to everyone she meets and in the process shows how someone might operate in a social space without a mandate. Yet the work also paradoxically abstracts any direct link to social experience because the main character acts within an impossibly restricted setting, and within the only impoverished non-place available to her (the foyer). In this sense the work speaks of immigration and exhausted possibilities, yet also care and energy across borders. On a more local level, Hilary Lloyd’s Car Wash (2005) shows young male car washers in Sheffield, who through their work and natural sense of place enact a type of social choreography with attitude.

Verwoert identifies another form of resistance in his essay, in the shape of non-performance in art and everyday life. The work of the late Július Koller, which will also be included in the exhibition, is given as an example of finding the limits of ‘anti-happenings’ and the reluctance and dissidence of his small performances. By asking whether it’s possible to refuse offers of more work, our compulsive behaviour is countered, and an attempt is made to restore the dignity of saying ‘no’. The inclusion of Austrian artist Esther Stocker also resonates; her posters contain phrases that apologize for declining invitations. Stocker’s wall installation I am Afraid I Must Refuse was first shown at Vienna’s Kunsthalle in 2005, and a new version of the work will be made for Sheffield. As the artist’s practice also extends to abstract painting, the duality that exists in the various facets of her work – namely between social interventions through text-based posters and more traditional object-based work – reflects another aspect of Verwoert’s plans. Here his strategy is to link a more formal aesthetic to socially engaged work in order to show how both can present new models of experience. Tomma Abts’ paintings, for example, which famously take a long time to complete, might connect unusually well to Deimantas Narkevicius’ film Revisiting Solaris (2007). The film features Donatas Banionis, who played the lead role of astronaut Chris Kelvin in Andrei Tarkovsky’s Solaris (1972). Tarkovsky, who based his film on Stanislav Lem’s eponymous science fiction novel, left out the final chapter from the book, and Narkevicius presents this missing section, which tells how the astronaut sets foot on the surface of the planet Solaris shortly before ending his space mission. Narkevicius’ work dwells on the passing of time in a similar way to that of Abts.

If in this sense abstraction is political, then, inasmuch as it taps into the latent energy of Sheffield, it also connects to the city’s architecture. Take the once doomed Park Hill estate for example. Built between 1957 and 1961 and partly inspired by Le Corbusier’s Unité d’Habitation, this housing complex in central Sheffield was viewed as revolutionary at the time yet in subsequent decades became ravaged by crime and was considered an eyesore that also suffered from poor noise insulation. In 1998 it was Grade II listed by the local council and has recently been gentrified using Pulp’s Jarvis Cocker as the face behind its rebranding. Verwoert’s inclusion of Michal Budny speaks of this unlikely type of transformation in a beautiful and comic manner; his models essentially undo sick architectural structures by turning them into abstract paper sculpture.

Verwoert is also sensitive to the manner in which the inclusion of predominantly international artists relates to ideas of the local and marginal. Within the framework of Art Sheffield 08 the international is perceived as equivalent to the local, because the selected work also inhabits the margins of urban spaces and develops from similarly secondary economic situations. The local host institutions can offer precisely the experience that is relevant to the work and its audience. As Verwoert writes: ‘The international and local approximate each other precisely in the moment when they mutually realize their respective marginality.’3

By collaborating with SCAF, both guest curator and host are looking to find a collectively improvised intelligence wherein each side can provoke and take pleasure in the other’s ideas. In this sense Art Sheffield 08 is attempting to amplify the resonances of its location rather than try to explain or interpret it. Perhaps what Verwoert is aiming at is what he has called a collaborative ‘body … [that] would be empowered by the shared exhaustion of a community to resist the pressures of a compulsory high performance culture by revealing the potentialities of life beyond the end of work.’4 At a point in time where the energies of artists, curators and writers who care are willingly being used up, this may prove to be a radical collaborative plan for survival.

1 http://www.artsheffield.org.uk/extra/janverwoert.html
2 Jan Verwoert, ‘Exhaustion and Exuberance: Ways to Defy the Pressure to Perform’,
Dot Dot Dot, No.15, Winter 2007, p.106 (Also to be published as a pamphlet edited by Stuart Bailey on the occasion of Art Sheffield 08)
3 Jan Verwoert, ‘Forget the National: Perform the International in the Key of the Local (and Vice Versa)! On the Experience of International Art Shows’, Research Paper: Biennials and City-Wide Events (eds. Steve Dutton and Jeanine Griffin), supplement published with a–n, December 2007
4 Jan Verwoert, ‘Use Me Up’, Metropolis M,
No. 1, 2007, p. 56