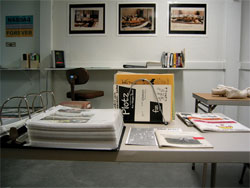 I hear time and again that Los Angeles has not committed to a community of temporary, independent, experimental project and exhibition spaces in recent years, and that support for such enterprises is hard to come by. However, I am a sceptical idealist, believing that LA not only has a tradition of temporary art spaces but also has the potential for reinvigorating models for staging projects with contemporary artists. Deep River comes to mind – a 325 square-foot, artist-run, ‘no critics allowed’ space downtown with a mission that lasted five years (1997–2002), led by Daniel Joseph Martinez, Glenn Kaino and Tracey Shiffman. At Six Months (August–January 2003) founders Eungie Joo and artist Kehinde Wiley facilitated the staging of a series of performances, discussions and installations. Champion Fine Arts occupied a temporary space in Culver City counting down their timeline (October 2004–Sept-ember 2005) by focusing on artist-curated group shows. Presently, Drew Heitzler of Champion is opening an off-the-beaten-track, currently unnamed bar (formerly a leather bar) in Culver City, offering the space for use by artists and curators.

Culver City, the newest not-Chelsea, not-Chung King Road bundled community of gallery activity in LA, was the home for a temporary project entitled The Backroom – a collaboration between curators Magala Arriola, Kate Fowle and Renaud Proch, active from September to the end of December 2005. The Backroom resisted the commodity impulse while situating itself at the heart of one major node of commercial art ventures. The project was a spontaneous laboratory, a comfy library (complete with casual furniture and study desks) of artists’ relics, put on display and made available for use. While some passers-by were clearly wary of the commitment of time required to engage with the space and its contents, other visitors seemed ready for a game of intelligentsia show-and-tell. Consisting of a series of presentations from individual artists’ archives in the form of objects, video, publications, sound and photography, which largely speak to their personality or their politics, the project has continually expanded, resulting in a growing body of information that does not intend to become a concrete collection.

Among the jumble of artefacts to be pored over were copies of Life magazine from 1968 from the collection of Walead Beshty, a photo album including 1930s’ photographs of Sergei Eisenstein in Mexico from the archive of Olivier Debroise, Stephen Kaltenbach’s insomnia journals – novels accompanied by a collection of casts of the artist’s hand – Archigram films, the tasteless joke books of Mark Veriabioff, diagrams illustrating canonical and obscure philosophical texts introduced by David Hatcher and Tom Lawson’s archive of Real Life magazine – the independent art publication produced in New York and Los Angeles from 1979 to 1994, which brings to bear the memory of a lost climate of rigour in cultural practice and criticism.

Set amid one of the most heavily congested streets in Los Angeles, en route to LAX international airport via La Cienega, The Backroom suggested a space of slowness, art and socializing – a salon-like forum constructing a locale for discussion and contemplation. An evanescent enterprise for housing impermanent acts, the curators discuss the project with an interest in process over production, providing a temperament of dematerialization, liminality and marginality. By definition the space resisted the tendency of institutions to enact the ritual of possessions of objects, of events and the desire to fix all activities in amber. The beauty of The Backroom rested in its interest in cultural production as a temporal phenomenon, echoed by its own stated intention to extinguish itself. There is poetry in this limitation, a sense of freedom perhaps only achievable in the context of independent spaces and independent curating.

This model is a relative rarity in LA. The curators are responding swiftly to their research, travel and dialogues with artists. There is an immediacy to their actions that counters the geography of art production in LA, as if proposing that (like the city itself) there are no centres but only ideas to be distributed. My own personal desire is to see this project continue in some incarnation – one that will necessarily evolve, contract, dissolve and reappear. Discovery and appreciation of these artists’ artefacts requires a dedication of time akin to an artist’s studio visit, demanding a great degree of active engagement on the part of the viewer. An ‘auto-curated’ experience, The Backroom brought home the notion that cultural enrichment and knowledge are not produced through commodification. In the context of LA, it seems that The Backroom was responding to something quite specific – an interest in sidestepping the problems of institutional practice, gallery systems and the illusions of permanence.