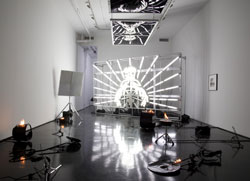 Embraced by Charles Saatchi, the Whitney Museum, fashion designers and glossy style magazines, Banks Violette famously finds inspiration in the mythos of a particular musical subculture: the Slovenian-style polka of the upper Midwest. He came by his intimate knowledge of this hermetic world during his years as a hardware store clerk and amateur trumpeter in Cleveland. Oh wait … sorry. I must have misread the press release or something. That should be ‘Heavy Metal’ rather than ‘Slovenian-style, etc.’. For ‘hardware store clerk’ substitute ‘tattoo artist’; for ‘amateur trumpeter’ read ‘crystal-meth addict’. Also: Hawaii instead of Ohio.

OK, now we’re talking. Because there are musical subcultures and then there are musical subcultures, right? And the kind of art world status that Violette has achieved seems to depend heavily on choosing the right one. Audiences who don’t know any more about Slayer than they do about Frankie Yankovic probably have an idea which is conceptually sexier, which opens a path to darker and more interesting places. Or, to be more cynical about it, which makes for better magazine and catalogue copy.

When it comes to Violette’s work and his career, my problem is not knowing how cynical I want to be. Certainly, my alarms start going off whenever I read – yet again – about the artist’s bad boy back-story. A New York magazine puff piece recently claimed: ‘In an art world filled with poses, Violette’s nihilism, at least, is no act.’ My first inclination – once I stop gagging – is to shout: ‘Thank God – real nihilism at last! None of that ersatz stuff that keeps clogging up the works.’ The frustrating thing is I’m not entirely sure if I’m joking.

In other words, whatever it is that Violette is selling, I’m not immune to its appeal. All that classic bad-for-you stuff – danger and evil, Romanticism and excess – does exert a hard-to-ignore power. And the question of whether nihilism is authentic or an ‘act’, how you know the difference, is actually something worth asking. In the most charitable reading of the work – the one Violette has proposed himself – that question is precisely the point.

Most of Violette’s previous projects were spun obliquely out of real-life narratives, violent heavy-metal epiphenomena: teen suicide in New Jersey, youth murder in California, church burnings and murders in Norway. Events, that is, where nihilist poses were acted out with very real consequences. Avoiding anything resembling reportage or sociology, Violette seemed instead to inhabit the overwrought fantasies of his protagonists: his slick, deadpan objects ostensibly simulated a dream version of the grisly events.

For his latest dual-venue exhibition, though, Violette jettisoned the news-clipping sources. And yet the mood (sombre) – and the objects (black epoxy, cast salt, shiny aluminium) – were remarkably similar to what he’s produced in the past. There was more hardware in evidence and definitely more in the way of special effects, but the two galleries showed the same kind of elegantly nasty things that have made the artist’s reputation. While they flattered art-historical trainspotters with a jumble of quoted Minimalist tropes, mostly they seem bent on creeping out the viewer.

At Team a smashed, black-painted drum kit was scattered across the floor, rigged out with gas jets intended to spew flames. (On repeated visits they weren’t lit – apparently in obedience to building safety codes. Not very rock ‘n’ roll.) At Gladstone nitrogen tanks sent streams of mist from a free-standing metal wall and frosted broken mirror panels. Objects were collapsed, shattered, eroded, burnt: an index of different modes of destruction, all in the past tense. There was an abandoned, post-mortem quality to the whole thing – a stadium concert after some cataclysmic apocalypse, Spinal Tap by way of Robert Smithson (though lacking the wit of either). The self-serious atmosphere was completed by a soundtrack of ponderous low-frequency hums (recorded at Team but played only at Gladstone). Composed by Stephen O’Malley of drone metal group Sunn0))), it was here played at an inappropriately ‘reasonable’ level, more drone than metal – nothing like the band’s usual gut-rattling volume.

So whose fantasy is this anyway? What’s really at stake in this arty spook show? The cynical answer is not very much at all. And for me, cynicism ultimately wins out. By abandoning the true-crime stories that undergirded his earlier work, by attempting to produce something more ‘abstract’ and generalized, Violette’s work ends up losing the critical charge it might otherwise have had. It becomes more about him – or rather, about the persona that has grown up around him. But who knows? Maybe I’d feel differently if the music were louder, if the flames were flaring full blast. I can’t decide if the problem is that I think Violette is simply trying to scare me, or just that he doesn’t scare me enough.