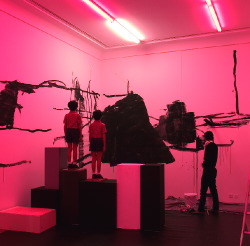 This exhibition brought together 14 young artists, all living and working in Switzerland. However, as curators Gianni Jetzer and Simon Maurer insisted, it was not conceived as the portrait of a generation but as a sketch of an 'overall present-day mood' marked by 'ambivalence', a 'groping about in an uncertain space' - hence the title, 'Fürchte Dich' (Be Afraid). As with all rhetorics of crisis, the question arises of whether there ever was a primordial time beyond ambivalence, a time when we leant back and said: 'this is art, and that is life - pass the Prosecco.' Many of the local culturati seem to agree, for example, that today's Zurich, on the contrary, bespeaks an era of reflection and consolidation, following the anxious hyperventilation of yore. Yet the most significant polarity of the exhibition wasn't that of angst versus repose: with all its good-natured tristesse royale it found enough common ground for both. Rather, it was the murky way in which the historical came to blend with the atmospheric.

To start with, one of Marie-Eve Jetzer's textile banners hanging from the walls of the entrance hall, Powerful Nonsense (2003), sparked cheery speculation as to whether it was a reflection on the exhibition as a whole. As Jetzer's banners subjected the art world to slightly self-absorbed ironies, the idea of striking fear into anyone's heart was at best a parody of the moral resonance art once had. The frightful thus becomes not a Zeitgeistian, historical attribute, but a trope, a prop. A number of art works merrily resorted to the traditional symbols of gloom: nightfall, winter, serpents, chainsaws, Thrash Metal and canine motifs. Daniel Schibli's video Untitled (2002) is a two-dimensional puppet theatre of sorts - coarse, hilarious and hypnotic at the same time - while Marc Bauer's unrefined pencil sketches of a family mountain dwelling, Le parc au biches (Autriche) (Doe Park, Austria, 2003), are poignant and raw in a similarly offhand way.

Enjoyably dismal in a manner that was sentimental rather than spooky, Andro Wekua's Namenlose Strasse II (Nameless Street II, 2004) is centred on twin dummies staring off into the depths of a one-room installation that is of unusual architectural intricacy by the artist's normal reductionist standards. And Regula Engeler's video Voyages Opaques (Opaque Journeys, 2003) attempts an equally solemn approach, her camera skimming over snapshots of natural disasters and other media events with an occasional admonition about the profound despondency at hand: 'They say it will be over soon ... But it's getting considerably worse.' Laurence Huber's photographs of little girls in sombre settings (Let's Pretend, I & II, 2003-4) and her video installation contrasting billowing sheets with a figure in a foetal position in glowering green (Echography 2003), though trying hard, are about as menacing as a Harrod's Christmas catalogue, and more decorative to boot. Chantal Hoefs and Christine Schütz' glaringly iconic installation Torzeit (Folly Times, 2004), including a tableau vivant of a half-naked shepherd surrounded by dogs, is clever in terms of atmospheric design but is memorable only by virtue of its 'pleasantly enigmatic' (Jetzer) references to art history.

Generally speaking, visual historiography was the more interesting aspect here. Pierre Vadi's Songs from the Liquid Years (2003-4), a poster in a retro 1960s style, worked well with Krach (Clamour, 2003-4), consisting of strings of popcorn dangling from the ceiling. Just as tongue-in-cheek, though not as jocular, Mai-Thu Perret's long-term project New Penderosa Year Zero (1999-ongoing) shows artefacts hailing from a fictive commune in New Mexico, including sculptures and a fascinating example from the Timetable Series (2002-4) displaying daily communal routines. Swirling 1960s motifs are also characteristic of Loredana Sperini's Valentina (2003-4), re-enactments of drawing techniques with needle and thread, resulting in a charming twofold estrangement of theme and form - if perhaps little else. Georg Gatsas' photographic portraits of underground Brooklyn artists and musicians (Untitled, 2003), accompanied by The Process (2003), a living-room mise-en-scène of pornography and record sleeves, spoke of an effusive, unalloyed search for bohemian utopia, and thus reminded us that Gatsas, born in 1978, was the youngest artist in a 'young' show.

Tatjana Marusic' video installation A Woman under the Influence - To Cut a Long Story Short (2002-3) is perhaps not entirely original in its jagged repetitions of scenes from Alexander Payne's Citizen Ruth (1996), a Hollywood satire about a glue-sniffing woman (Laura Dern) ordered by a judge to get an abortion. Nevertheless it digests weighty complexities into slick, coherent form, touching on issues of artistic appropriation, gender roles and cinematic gloss versus unruly pixel aesthetics, but also of dubbing and translation. Finally, Valentin Carron reached back much further in time and faithfully reproduced paintings by Fernand Léger - 'Untitled (Peinture Léger)' (2002-3) - which were then mounted as if they were bearskin hunting trophies: an apt celebration of revolutionary avant-garde art as a domesticated, atmospheric token.