Beginning with a Bang 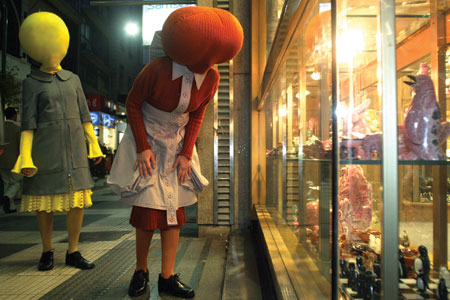 The timeline that ran around the perimeter of one room of the Americas Society Art Gallery was meant to teach us (in that shamelessly didactic way that only timelines can) three main points. First: if we didn’t already know it, during the period from 1956 to 1976 Argentinian artists such as Eduardo Costa, Alberto Greco, Roberto Jacoby, Marta Minujín and Margarita Paksa were working at the same time as Yves Klein, Carolee Schneemann, John Cage, Hans Haacke and La Monte Young. And, like their North American and European contemporaries, Argentinian artists made their aesthetic decisions in a climate in which intellectuals such as Roland Barthes, Jacques Derrida and Jacques Lacan mattered deeply. Second, the timeline indicated that Argentinians also employed constructively destructive aesthetic strategies that can be historicized within a familiar art-speak that includes ‘dematerialization’, ‘anti-object’, ‘conceptual’ and ‘action-based’. Up to this point we are reminded of important documents from the period, including Aldo Pellegrini’s ‘Fundamentos de una estética de la destrucción’ (‘Fundaments of an Aesthetic of Destruction’), written in 1961, which announced that: ‘The time has come to give the concept of destruction its proper dignity’, for ‘destruction is, for the artist, the supreme order of freedom’. Violence was turned inwards, adopted as a representational strategy. But timelines, in their way of mapping and visualizing sequential and concurrent events, often make more of coincidences than those of us reading them should.

And so it is the third point that betrays the comforting cadence of the timeline’s march and marks the history of recent Argentinian art as not merely a corresponding or even parallel one, but as one that is particular to Argentina. For by 1976 state terrorism and violence had become systemic there, and repression, censorship and disappearance institutionalized. The policies of the dictatorship silenced the artistic community in such a way that a new field of action had to be found – one that the show’s curator, Victoria Noorthoorn, indicates with the word ‘intimacy’.

Noorthoorn’s historical overview finishes in 1976, leaving us to find our way, regardless of the uncharted decades in between, to the present moment, represented by 11 works on view in the adjacent rooms. How have we progressed from ‘confrontation’ to ‘intimacy’? The show gives only clues, and it doesn’t tie them together. Perhaps one way to think about the transition is through that dream of telepathic communication at the core of Conceptualism’s anti-object orientation. Destroy the object so you can (in fantasy at least) move minds and hearts together. Thought in this way, Noorthoorn’s curatorial polemic makes more sense, particularly in the light of her consideration of humour as a critical socio-aesthetic strategy for Argentinian artists, who had to develop ways of producing work not so much against as beyond systems and institutions. Marina de Caro’s work 4 Ojos (4 Eyes, 2007) is a video that portrays the artist wandering through Buenos Aires as a comical yet oddly poignant two-headed being. This four-eyed creature purports to have two consciousnesses, owing to the fact that its second head, which exhibits the will of a helium balloon, floats any which way it pleases while tethered to its twin only by a lengthy, limber neck. De Caro’s is an imagined intervention into bodily behaviour in the most fundamental sense. 4 Ojos is at once refreshingly whimsical, after so much has been torn down, and fascinating – for so much is as it is because of the body’s parameters.

In her catalogue essay Noorthoon quotes Mikhail Bakhtin: ‘Laughter is not an external form, but something internal … [it] has overcome the INNER CENSOR, the fear of the sacred, authorized prohibition, the past, power … That’s why it has never been possible to make laughter into an instrument for oppressing.’ The notion that humour provides a means for human sociability, protected from the institutions that constitute the public sphere, helps us to understand the exhibition’s strongest work. Roberto Jacoby and Syd Krochmalny’s La castidad (Chastity, 2007) is a video installation that offers a fictionalized account of the year-long ‘micro-political experiment’ undertaken by the two artists, 37 years apart in age. The collaboration began in 2006, when they entered into a contract involving cohabitation and ‘artistic and intellectual work’ on new forms of relations that can be characterized neither as a sexual partnership nor as ordinary friendship. The criticism that the work has received (Krochmalny recalls being called sick, hypocritical and even an arch-conservative) is, in fact, to its credit. It suggests that to pay close attention to those moments of human interface that are rarely thought about within the context of institutions is to highlight some of the most special aspects of human existence. La castidad presents those aspects – both intimate and everyday, Argentinian and universal – as fertile grounds for a new politics.