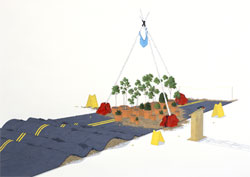 ‘We will not stand by idly while our Earth is butchered for the monetary gain and the luxury of the wealthy élite. As long as our planet continues to be raped, we will be out there.’ So reads a 2001 communiqué from the Earth Liberation Front (ELF), a decentralized network of eco-saboteurs responsible for hundreds of actions in the last decade, including firebombing a Nike outlet in Minnesota, spiking trees and destroying logging trucks in Oregon, burning down a ski lodge in Vail, Colorado, and torching scores of SUVs in the San Gabriel Valley. Denounced by the FBI as America’s ‘most dangerous domestic terror organization’, the ELF is also responsible for the slogan that gives Ben Peterson’s recent exhibition its dramatic title: ‘You Build It, We Burn It!’

Spray-painted on the scene of a firebombed genetics lab, the phrase connects a singular act of destruction to a worldwide campaign of environmentalist resistance and ‘monkey-wrenching’; as the title of an art exhibition, its significance is more ambiguous. Indeed the five drawings that comprise ‘You Build It …’ work to confound the romantic oppositions – modernity versus nature, for example, or rich versus poor – that are presumed to structure the environmentalist debate. The clash between consumerism and environmentalism is instead figured in Peterson’s drawings as a conflict between two built orders: pitched tents and picket signs square off against big-screen TVs and strip-mall architecture; the show’s poster depicts an immense, intricate scaffolding with activists hanging banners from its upper reaches. (The exhibition includes a unique sculpture cum exhibition design, a large artificial wall on which the largest drawing is mounted, and a faux stylish worktable.)

Each work places an architectonic arrangement of recognizable volumes in the centre of a large white sheet of paper. Coloured evenly within their precise boundaries, these objects have the flatness and vividness of comic book illustrations, though none of their ornamental flair. The represented forms – crumbling façades of buildings, squares of sod, riot fences, chunks of pavement, water coolers and rucksacks (Them Gone Down, all works 2006) – are carefully pulled into shape by climbing ropes planted in the ground with stakes. There’s no tension to these constructions, and no weight to the objects they’re built from; buildings pull free from the earth like a candle from an iced cake, leaving a square footprint in the dirt.

So too do these assemblies make room for radical shifts in scale and Magical Realist distortions of space and time. Massive boulders lean ominously against a Sam Goody electronics shop window in TR, and a tent-sized rucksack teeters atop a globe containing recycling bins in Whole Earth Outlet. Each drawing seems to have been the scene of direct action of some kind. Police barriers, bike locks (used to lock protesters’ arms in place during a civil disobedience action) and picket signs have been scattered across the artificial lawn of TR; upended fish tanks in Them Gone Down imply the Animal Liberation Front run riot in a pet shop. Even more momentous and disruptive forces are at work: Final Ascent shows the climbing terrain from Mission Cliffs in San Francisco upended and smashed; Road Rage depicts a two-lane blacktop crumpling like it’s made of paper.

Under the paving stones, the beach? Not exactly, unless one imagines ‘the beach’ to be composed of chocolate marshmallow ice cream. Nature doesn’t appear in these drawings; nor does what Robert Smithson, describing the paintings of Jackson Pollock, called ‘a torrential sense of material’. The mounds of dirt in Road Rage and Final Ascent, the rocks in TR, are about as natural – which is to say, material – as the potted plants and Astroturf represented elsewhere in the drawings. Which is also to say that the scenes of raw production and nefarious research that are among the ELF’s primary targets don’t get a look in here. Instead, the drawings depict a world of leisure, where environmentalists have become as enamoured of consumerist goodies as their hedonistic counterparts and supposed ideological enemies; one man’s home entertainment system is another’s plush camping gear. Bourgeois habits die hard.

These pictures would seem to depict narratives of activist wish fulfilment (‘We will win’, reads a famous ELF graffito). Witness the flag of victory placed atop the earthwork in Final Ascent, the podium left over from the press conference on the site of Road Rage, the appropriated monument in Whole Earth Outlet. Yet this celebratory mood is belied by the pervasive sense of stasis in Peterson’s drawings – the impression of modernity and eco-terrorism frozen, like Laocoön, in an instant of eternal, agonistic combat.