That bodies speak has been known for a long time 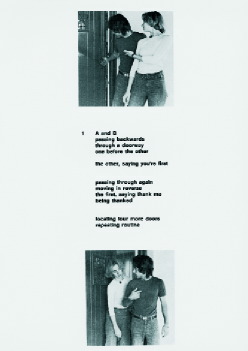 What does a gesture mean? In this exhibition - the title of which is a quote from Gilles Deleuze - this apparently simple question proved a fascinating subject and an exegetical challenge. The topos of 'The Body' has been overworked in countless exhibitions focusing on subjectivity and the theatricality of the self. Although this show also touched on issues of identity politics, the broad 'Visual Studies'-oriented approach of curators Hemma Schmutz and Tanja Widmann lent the subject matter a new dimension - not least through the inclusion of, among other things, music videos and audio-visual courses in rhetoric.

For comedians the ambiguity of body language has always been part of their stock-in-trade. Jacques Tati's classic film Playtime (1967-8) is a case in point: in the tradition of Charlie Chaplin and Buster Keaton, the charmingly antiquated Monsieur Hulot tries in vain to jump onto the carousel of modern living. In his 'Notes on Gesture' (1993) printed in the exhibition catalogue, philosopher Giorgio Agamben extends the oft-cited fin-de-siècle crisis of language to include gestures: 'By the end of the 19th century', he writes, 'the Western bourgeoisie had already lost its gestures once and for all.' In his view it was not until the moving images of cinema that modernity acquired a way of breaking down the 'mythical rigidity' of ossified social conventions that had become devoid of life. It is this divide between the old times and the new that is so aptly portrayed by Tati.

Gestural crises manifest themselves not least in a recourse to codes of representation from earlier periods. This ambitious exhibition included silent films made in 1912 by D. W. Griffith, early works of cinema that reactivated the gestural idiom of 18th-century theatre. Another such example of historical transfer was studied by the art historian Aby Warburg in his Mnemosyne Atlas (1925-9). On 79 loosely compiled display boards - which were shown in the exhibition in the form of a number of photographs - he compared 'pathos formulae' from Classical art with their Renaissance equivalents.

The curators took Warburg's montage-like layout as a model for the thematic grouping of works under general titles. This idea works best in the section entitled 'Men in the Cities', where Robert Longo's drawing of a man in a suit Untitled (Frank) (1980) is juxtaposed with other masculine poses. In the same way that Longo isolates his figure against a white background, Antoni Muntadas' video Portrait (1994) shows only the gesticulating hands of a businessman. By contrast, Roman Ondak's amusing series of photographs 'Tomorrows' (2002) emphasizes the social context by asking small children to imitate official acts such as the unveiling of a memorial

Gestures of liberation take practice. In her comical video performance Ich will Feministin sein (I Want to be a Feminist, 2004), Meike Schmidt-Gleim 'repeats' canonical works of feminist art by reducing them to formulaic gestures: she dons a false beard like Adrian Piper's male alter ego in Mythic Being (1972-5) or lunges towards the camera with a knife, recalling Martha Rosler in Semiotics of the Kitchen (1975). In an accompanying text Schmidt-Gleim ironically links her musings on a 'feminist collectivity' with the work-out videos of Jane Fonda: can emancipatory gestures be practised like aerobics? The question of how acts that were subversive in the 1970s appear today also sheds light on the relationship between difference and repetition in mimesis.

Interestingly, only older works focus on the invention of new gestures. In her video Gestures (1974), for example, Hannah Wilke moulds her face with her hands, creating grimaces reminiscent of Charcot's hysterical women or of anti-wrinkle exercises. And in his video I Am Making Art (1971) John Baldessari uses his body in a sculptural manner, reciting the piece's title like a mantra as he performs some flaccid gymnastics. Although the transgression of codes is portrayed explicitly only by Wilke and Baldessari, it remains the subliminal vanishing point shared by all the other works.