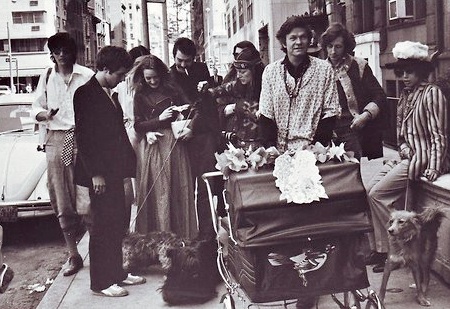 After a recent screening of Brand X (1970) at the New Museum, New York, the film’s director and its star, Wynn Chamberlain and Taylor Mead, clambered onstage for a question and answer session. Brandishing canes and sunglasses, the two octogenarians – Chamberlain is 83 and Mead is 86 – gave the audience an object lesson in the history of the counterculture. ‘We started the whole Quaaludes thing,’ Mead announced. ‘Do you remember we went to Disneyland with Andy and we couldn’t get in because Gerard’s hair was too long?’ Chamberlain returned. ‘Whatever,’ Mead deadpanned.

The meeting was particularly poignant because Chamberlain and Mead had not met since Brand X was first released in 1970. A raucous, choppy, political satire inspired by a day in the life of American television, the film appropriates TV formats ranging from daytime talk shows and commercials to White House press conferences. The film is a precursor to Saturday Night Live and its anarchic humour remains untarnished, despite the fact that it has not been screened for nearly 40 years.

Chamberlain – a painter and fixture on the Downtown scene before he decamped to India following the release of Brand X – populates his film with Warhol superstars including Candy Darling, Ultra Violet and Mead, as well as Abbie Hoffman, Sally Kirkland and a young Sam Shepard. The cast’s onscreen shenanigans – Mead demonstrating exercises on ‘The Morning Exercise Show’, a commercial for Body Odor, Darling appearing on the game show ‘What’s My Sex?’ – capture the essence of the scene in and around the Bowery at that time.

As does the complicated story of Brand X – a narrative about distribution as madcap and ripe with conspiracy and coincidence as Thomas Pynchon’s The Crying of Lot 49 (1966). From the start, Brand X was thwarted by an historic association. Having long contemplated making a feature film, Chamberlain purchased ten rolls of 16mm film; those rolls were subsequently appropriated by Warhol, who used them to shoot Sleep (1963), featuring John Giorno. Once Chamberlain cobbled together the money to shoot Brand X, it enjoyed a brief release before disappearing into the vaults of its distributor, New Line Cinema. From here, things become murkier. The print disappeared for nearly forty years. Chamberlain believes the disappearance was part of a political plot to suppress its countercultural message; New Line claim a simple move away from underground film. Whatever the case, Chamberlain was unable to obtain a print of his film until 2007.

The screening at the New Museum was the first time the film had been shown in nearly 40 years. New York in 1970 and New York in 2011 are two vastly different worlds – the presence of the New Museum is itself testament to that difference. The New Museum is now engaged in archiving the past life of the neighborhood, and the sold out screening of Brand X was filled with young and enthusiastic consumers of the Downtown myth, who greeted Chamberlain and Mead as heroes.

But neither man seem interested in resting on past laurels. Mead eagerly flagged up his weekly performances at the Bowery Poetry Club, while Chamberlain did an impromptu pitch for his next feature idea. It’s meant to reunite the cast of Brand X, superstar octogenarians getting up to no good down in Orlando, Florida, home of the retired. ‘I want all of us in wheelchairs, getting pushed around by sexy nurses,’ said Chamberlain. ‘I’ve got the proposal right here.’