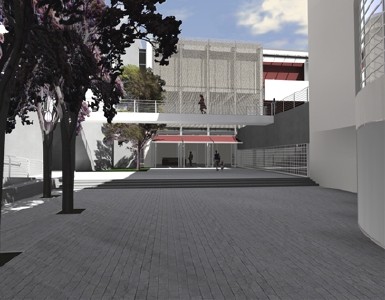 On a warm spring evening last November ugly plywood boards came down to unveil a public space that brought fresh air to Maria Antonia, a historic street in the heart of São Paulo. Cocktail glasses in hand, guests marveled at the open space, where an Amilcar de Castro sculpture, alone in the middle of an ample courtyard, welcomed visitors to Brazil’s newest museum, the Instituto de Arte Contemporânea (IAC).

Though realized over the last two years, the project’s roots go back more than a decade. In 1991, Raquel Arnaud, one of São Paulo’s most prominent art dealers, decided to found an institution in which to gather the work of sculptor Sergio Camargo, who died in 1990. With the help of gallery owner André Millan, the project grew to embrace the estates of Brazilian artists Amilcar de Castro, Mira Schendel and Willys de Castro. This is a rare initiative: the Fundação Iberê Camargo and the Museu Lasar Segall are the only other museums in Brazil devoted entirely to the research and exhibition of a specific artist.

Installed in the Joaquim Nabuco building, the IAC shares its space with that of the Centro Universitário Maria Antonia, a complex run by the University of São Paulo that includes both a theatre and exhibition spaces. Built in the 1920s, the buildings served as the university’s philosophy department, becoming the centre of fierce debates and headquarters of resistance movements during the military regime of the ‘60s. After an invasion in 1968, the school transferred its philosophy classes to its campus in São Paulo’s west end.

Nearly half a century later, Maria Antonia is bustling, home to a private university, cafés, shops and libraries. IAC’s glitzy opening ushered in a new phase for the area, with a minimalism that seems to wrestle with the heavy constructions crammed around it.

The fact some members of its board of directors also represent the artists commercially raised doubts regarding the integrity of the intentions behind the museum. To quell the rumours, André Millan, responsible for the works of Mira Schendel, amicably left the group in December.

Raquel Arnaud dismisses the case as a minor episode, claiming that no one on the board of directors knew the reasons for Millan’s departure. In her opinion, it is short-sighted to believe commercial galleries cannot take institutional positions, citing the release of Camargo’s catalogue raisonné only made possible by the work of researchers at the IAC.

But in the opinion of curator Paulo Herkenhoff, the museum’s lack of a personal collection is potentially problematic. As the works at IAC are loaned to the institution, Herkenhoff believes that there is a clear conflict of interests between artists’ commercial representatives and the museum’s institutional role, a difficulty that could mar the fate of the newborn venue.

Whether or not this structure remains, with a promising inaugural exhibition, the IAC looks set to succeed.