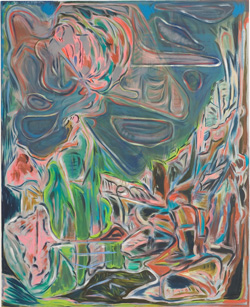 Brian Fahlstrom’s Away (all works 2006) was a curious presence in the artist’s recent exhibition. Despite its modest size, the work was indexical of others in the show, presenting a deliciously matte palette of nebulous colourations in a mode conflating references to Paul Cézanne and late Willem de Kooning. Unlike its exhibited companion works, though, a strange representational quality abided deep within the work; a dome-like structure appeared at the centre of the canvas, like an apparition swathed in a cloud of abstraction and eliciting an uncanny familiarity.

For his second exhibition at Marc Foxx, Fahlstrom presented the latest examples of his ongoing contemplation of abstract surface tensions. Both expansive and intimate, each work articulated a fundamental strain of painting: the irreconcilability between a flat surface and expectations of representation. Surprisingly mature, Fahlstrom’s recent works come as a refuge of sorts from a field of young painters dabbling in trite modes of supposedly psychedelic reconfigurations of reality. Rather than illustrating puerile, rehashed hallucinogenic tropes, Fahlstrom elicits a refreshing anxiety of perception in which a painting provides a profound consideration of the relation between sight, immanence and representation.

The exhibition was dominated by Present, a three-panel canvas hung alone on a long wall. An engagingly panoramic work, the piece is the apex of the artist’s recent efforts. The canvas is marked by a subdued, muted palette of greens, lavenders and reds seemingly struggling to resolve themselves as forms. Spread across three abutting canvases, this gestural battle both acknowledges and ignores the boundaries between them. Fahlstrom’s brushwork overlays each division, creating a congruous whole, yet each panel could stand on its own. In moving from right to left, the painting appears almost as a landscape, at the right end subtle and stable, while by the left third this stability has yielded to a quivering storm of gesturation.

For all their deformed ferocity and passages of bathetic calm, it is easy to perceive distinct, possibly representational forms in Fahlstrom’s paintings. For the painter, in fact, these works depict landscapes. Yet they are not painted en plein air or from photographs, and the question then becomes: what kind of landscapes are they? If one allows that Cézanne’s work describes the dissolution of representation into abstraction, Fahlstrom reverses the favour. Fahlstrom posits that the representational ‘real’ has been indelibly changed from the ‘real’ disassembled by Cézanne’s generation; today that ‘real’ is paradoxically unrepresentable.

The paradox is played out through the surfaces of these paintings, each of which yields a tension between an indistinct miasmic appearance and an uncanny sense of possible forms on the verge of coherence, fulfilling the viewer’s desire to envision some actual presence. Light Low is an absorbing exercise in this play between the non-objective and the representational. The surface is indelibly flat, yet built up with deep layerings of pigment, offering an arresting and broad field of pink ‘corrupted’ by the colourations beneath. The field looks like a representation of a canvas, indiscriminately thrown over a frenetically entwined substructure whose deep strata occasionally coalesce and suggest cogent, literal forms.

While it is perilous to use the ‘S word’, there is something of the sublime in Fahlstrom’s paintings. Through their diaphanous skeins of orgiastic colour the works want to unveil another space, one brought forth like rifts along a fault line, while simultaneously erasing and dispersing such immanent presences. In playing with this anxiety of surface tension, Fahlstrom’s work resonates with a fundamental question; what do we look at when we look at a painting? The work cannot be delimited by its material substance, that material’s collusion with the activity of painting or the train of history that haunts each painter. In this field of the flat and formless, that informe lures us to create appearance, to recognize and define some thing on the surface of the painting. In achieving this, Fahlstrom’s work conspires with painting’s history, not in an act of appropriation but rather as an intuitive act. In resisting definitive representation, his paintings alternately express and thwart their viewer’s sensory urges, a desire always to ascribe presence to an otherwise inarticulate field.