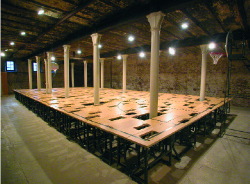 Situated in the centre of Triple Candie's cavernous main space in a former Harlem brewery, Brian Jungen's untitled installation was as much a proposition as a self-contained work. It was composed of 214 sewing machine tables placed side by side to form a single surface two metres off the ground, punctuated by 12 white lacquered columns. Jungen set two basketball hoops mounted on free-standing ladders at each end and painted lines over the surface of the tables, creating a half-size basketball court. Yet, bathed in bright lights, the glowing expanse is also a stage that would be perfectly suited for a Pina Bausch performance or Samuel Beckett's Endgame (1957).

Echoing the empty gallery space, this empty court/stage is an anxiety-engendering void demanding to be filled. Fools, they say, rush in, and part of the subtle brilliance of Jungen's installation is the way it lures us close and encourages us figuratively to place ourselves on this stage. Thus the 'theatricality' inherent in Minimalism, which so outraged Michael Fried in 1968, is, by way of Bruce Nauman and Felix Gonzalez-Torres, made the very heart and soul of the work. With a deft economy of means Jungen activates both the space and the viewer, creating an environment in which participation is not without consequence. The numerous associations, histories and ideas that he introduces all have their moment, yet are quickly dispatched. Their gutted remains pile up like bodies in Macbeth (c. 1606).

Site-specific in the best sense of the term, Jungen's installation positions itself at the junction of socio-economic and geo-political forces. Its layered spaces are not only physical and geographic but also historical and cultural. How can we not look at a basketball court in Harlem without thinking of the Harlem Globetrotters? Or of David Hammons' seminal Higher Goals (1982).

Disenfranchised minority members of the population have traditionally found successful avenues into themainstream via the alignment of sports, entertainment and fashion: for example, Harlem's history of sweatshops. Globalism has redefined Harlem and the US workplace as clothing companies export their labour needs to distant Third World countries. The irony of these goods returning to adorn the bodies of the disenfranchised reflects how well the notion of planned obsolescence applies not only to commodities but also to consumers. Dichotomies of absence and presence, nearness and distance, difference and sameness; non-sequiturs such as Comte deLautréamont's famous meeting of an umbrella and a sewing machine on a mortician's table. A cornucopia of art-historical references from Minimalism, 'women's work' and issues of female labour to Body Art, the 'arena' of Action Painting, commodity fetishism, Performance and black/'post-Black' art and the struggle of self-representation - these myriad thought channels are all evoked with an almost magical sleight of hand. Now you see them, now you don't.

In this sense perhaps the most significant precedent for Jungen's piece is Gabriel Orozco's Empty Shoe Box (1993), which performs a similarly powerful disappearing act. As ambitious as it is restrained, Orozco's work goes to the very core of art's reception and value. Is the box a hollow joke or a vessel of contemplation full of meaning? Like Orozco's, Jungen's practice is embedded in the realm of the everyday and frequently uses ordinary objects, re-making ready-mades to call attention to their underlying politics and poetics, drawing lines of connection between late capitalist production methods, post-colonial deterritorialization, identity politics and institutional critique. His series of sculptures, each titled Prototype for a New Understanding (1997-ongoing), transforms Nike Air Jordans into Canadian First People's tribal masks, while for his large-scale Shapeshifter (2000) Jungen used cheap white plastic chairs to create the hanging skeleton of a whale. Thus commodities whose transience is palpable become the source material for mock ethnographic displays - investments in the reclamation and reification of an often dubious 'history'. These hybrid forms, exercises in sculptural détournement, play havoc with the way that capitalism seeks to inscribe the sign value of all things within the culture. Funny, intellectually rigorous, celebratory, self-critical and disobedient, all of Jungen's work refuses to sit quietly and be still.

Finally, it is significant that Jungen chose to use new sewing machine tables rather than used ones, which would have been overburdened with the weight of their respective histories, too marked by their use(d) value and evidence of the body. Shiny and unblemished, the tables/court/stage, while referencing a pointed, problematic past, create a sense of immediacy and an awareness of how we continue to be determined by the specific forces of control - vicious cycles of production and consumption - that shaped our predecessors.