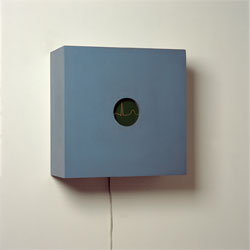 On 4 April 1966 Brian O’Doherty invited Marcel Duchamp to dinner. A qualified medical doctor who had studied at University College Dublin, Cambridge and Harvard before abandoning medicine for a multi-tasking life in the New York art world, O’Doherty had expressed an interest in making a portrait of his friend. During the course of the evening he hooked Duchamp up to a borrowed electrocardiogram and took three readings of the great man’s heartbeat. The resultant work in 16 parts, Portrait of Marcel Duchamp (1966–7), is a fascinating attempt to reconfigure a traditional visual genre during an era that declared many such inherited genres obsolete. In retrospect, the composite Portrait…, whose constituent elements include the original cardiogram read-outs, preparatory drawings and a number of home-made oscilloscopes, draws together a number of the key concerns of that era and of the years that were to follow: kinetics, systems, presence, the index, identity. By the end of the following year Christian Barnard had performed the first successful heart transplant. One year later Duchamp was dead.

While viewing ‘Beyond the White Cube: A Retrospective of Brian O’Doherty/Patrick Ireland’, the inaugural exhibition at the newly extended Dublin City Gallery The Hugh Lane, it was sometimes necessary to remind oneself that O’Doherty came of age at a time when the possibility that Duchamp might give Pablo Picasso a run for his money in the greatest-artist-of-the-20th-century stakes was remote. The show duly registers O’Doherty’s multifarious contributions to a paradigm shift that continues to shape our thinking and seeing, although fortunately not at the expense of his work as an exhibiting artist over the past half a century. (The exhibition’s title, which obliquely name-checks his groundbreaking Artforum essays from the mid-1970s on ‘The Ideology of the Gallery Space’, implicitly acknowledges this danger while also suggesting we get over it.) An urbane polymath working in the eye of the storm, O’Doherty also spent part of 1966–7 assembling the legendary Aspen 5+6 (1967), a multimedia magazine-in-a-box that merited a room of its own in the exhibition. Its stellar cast of contributors includes Samuel Beckett, William Burroughs, John Cage, Marcel Duchamp, Morton Feldman, Dan Graham, Sol LeWitt, Robert Morris, Hans Richter, Robert Rauschenberg, Alain Robbe-Grillet and Susan Sontag, and it also contained the first publication of Roland Barthes’ seminal essay ‘The Death of the Author’. A well-spent $8 for the astute bibliophile in the autumn of ’67.

The bundle of concerns at the heart of O’Doherty’s work includes the systematics and performativity of language, the phenomenological interaction of the viewer with the art work and its environment – what Hugh Lane director
Barbara Dawson describes in her catalogue essay as ‘the fiction of identity’. The idea of ‘determinism within certain modalities of order’, as O’Doherty puts it, informs a number of early works based on the chessboard grid as well as the austere anti-theatre of his structural plays from the late 1960s, designed to be performed by players whose movements were largely predetermined by the nature of the grid they were instructed to traverse (as in contemporaneous works by Beckett and Nauman). The numerous ‘Rope Drawings’ combine an interest in opticality and immersive installation, whereas his series of ‘Ogham sculptures’ (1967–ongoing), based on the eponymous early Irish writing system, explores the nature of linguistic sign systems and, in particular, what linguists refer to as ‘shifters’: terms whose semantic content relates to the context in which they are uttered – for example ‘I/here/now’. Informed by the strains of Structuralism, phenomenology and Minimalism then in the ascendant, O’Doherty’s heterodox work is also haunted by the twin ghosts of what Clement Greenberg would have disdainfully termed ‘literature’ and what historians used to call ‘The Irish Question’. His series of constructed wooden 'Labyrinths', executed intermittently since the mid-1960s, invests the purist visual aesthetic of ‘primary structures’ with a sense of symbolism and mythology, psychology and play, which orthodox Minimalism worked hard to disavow. A personal pantheon of intellectual mentors – Bishop Berkeley, Jonathan Swift, James Joyce – whose contributions to world culture were refracted to varying degrees through the prism of their experience of Ireland are strategically invoked in works otherwise art-iculated within the language of the cosmopolitan avant-garde.

The distance between life in metropolitan New York and an increasingly turbulent Ireland, which O’Doherty visited regularly, was dramatically highlighted on 30 January 1972, when British soldiers shot dead 13 unarmed civilians on the streets of Derry. In angry response to the events of Bloody Sunday O’Doherty staged a performance later that year in Dublin, Name Change, in which he ritualistically transformed himself into Patrick Ireland, the identity to which all his subsequent art works have been attributed. His ongoing commitment not to exhibit in England until British troops are withdrawn from Northern Ireland partly accounts for the relative invisibility of his work in Britain, as opposed to his various writings, which include an earthy novel of life in remote prewar rural Ireland, The Deposition of Father McGreevy, short-listed for the 2000 Booker prize. This dual identity was augmented over the years by three other hard-working alter egos, Sigmund Bode, Mary Josephson, and William Maginn, whose true identity was revealed as late as 1998.All five personae take a humorous bow on the cover of the show’s substantial catalogue, which contains a dozen or so invaluable essays.