From Brussels With Love 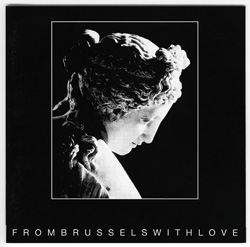 The question of pretentiousness was evidently a hot topic during the heady New Wave days in which From Brussels with Love first appeared. Paul Morley, reviewing the compilation for the NME in 1980, wrote: ‘Of course it’s posey: what isn’t? It’s pop/art. Insufferably over-fashionable, lavishly over the top, dreadfully dilettantish, finely eclectic. Pop can be so many things.’ Brian Eno, in an interview featured on the compilation itself: ‘For me the great strength of dilettantism is that it tends to come in from another angle […] an intelligent dilettante will not be constrained by the limitations of what’s normally considered possible; he won’t be frightened, he’s got nothing to lose.’ Compiled by the Belgian indie label Les Disques du Crépuscule, in part-collaboration with the hugely influential Factory Records label, the original release was issued on tape along with a beautifully illustrated booklet designed by Benoît Hennebert, with Jean-François Octave and Claude Stassart. Although there have been a number of official and unofficial versions subsequent to the original release, these have mostly featured alternative tracks or songs missing from the 1980 cassette edition. LTM’s reissue is the first to restore the work of glorious dilettantism that is From Brussels with Love to its original form.

Bookended with two short synth sketches by John Foxx, almost every track on From Brussels with Love is an unabashedly melancholy or angst-ridden gem. Early in the running order come Thomas Dolby’s poignant ‘Airwaves’ (its lyrics peppered with words such as ‘broadcast’, ‘antenna’, ‘pylon’ and ‘motor homes’, the track is pure Modernist nostalgia 20 years before it became fashionable), the unease of Repetition’s ‘Stranger’, replete with Siouxsie Sioux-influenced vocal stylings, and the unbearable resignation of The Durutti Column’s electronic ballad ‘Sleep Will Come’. Michael Nyman’s ‘A Walk Through H’, with its charmingly wheezy strings sounding like an unhealthy Philip Glass gone jogging, provides an upbeat Minimalist segue into the compilation’s spoken word interlude: the above-mentioned Eno interview (spliced with Phill Niblock’s composition ‘A Third Trombone’), a ten-minute interview with legendary actress Jeanne Moreau (in French, untranslated, and to the accompaniment of languid Erik Satie piano pieces) and Richard Jobson’s poem ‘Armoury Show’ (‘To be popular, one must be a mediocrity’). Towards the end can be found French post-Punkers Radio Romance, Germany’s Der Plan and B.C. Gilbert and Graham Lewis from the band Wire, throwing menacing and astringent contributions up against Kevin Hewick and New Order’s clunky but affecting ‘Haystack’ (the first time the ex-Joy Division members had played since the suicide of the band’s singer, Ian Curtis). Alongside these is Gavin Bryars’ gently breathtaking ‘White’s SS’, which refers to the ‘systems and sentimentality’ that his friend the composer John White applied to music-making.

From Brussels with Love is a masterpiece of distinctly northern European post-Punk eclecticism. Comparisons could easily be made with the Cold-War romanticism of Low and Heroes-era David Bowie: wintry synthesizer textures, Minimalist piano melodies that sound like they’re played in empty drawing-rooms at dusk, cover images of classically inspired art, multilingual lyrics and not an American accent to be heard anywhere. The accompanying booklet features texts in French, Russian, English, Japanese and German, illustrated with Octave’s pen-and-ink drawings, which wouldn’t look out of place in a group exhibition of young artists today – a hooded figure on the shore of a lake, empty armchairs in a wood-panelled room looking out onto alpine landscapes, a lonely bed-sit (not to mention the hand-drawn portrait of Marcel Duchamp that graces the cover of the 1983 edition) – painfully enigmatic, possibly rendered by a clever but existentially troubled undergraduate poet.

If you were to draw a picture of the ideal From Brussels with Love listeners, there would be little difference between the 1980 and 2007 versions. They would be young women dressed like Jeanne Moreau, hanging out forlornly in grim new-build towns with young men in long overcoats and 1940s’ haircuts; on the one hand nostalgic for a postwar Europe of faded grandeur, and intellectuals living in exile amid chilly technocratic progress never experienced first-hand, on the other all too aware that this wonderful ‘intelligent dilettantism’ might just be their ticket out of there.